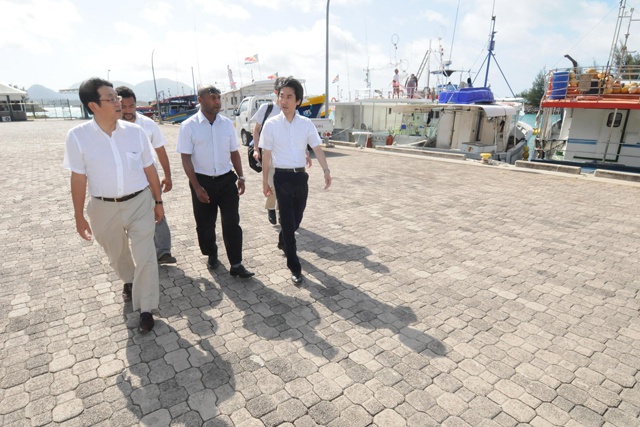 On his one day visit to Seychelles Japan’s State Minister of Foreign Affairs Minoru Kiuchi visited the Providence Fishing Port which was financed by Japan. The government plans to extend the port to cater for increased fisheries activities. (Louis Toussaint, Seychelles News Agency)

(Seychelles News Agency) - Increased activities in the Seychelles artisanal and semi-industrial fisheries sector is prompting authorities to extend the Providence Fishing Port. This was discussed on Monday as officials of the Seychelles Fishing Authority, SFA, accompanied Japan’s State Minister of Foreign Affairs, Minoru Kiuchi, on a visit to the island nation's port facilities, which was financed by the Japanese government at a cost of $11.52 million.

Located at the Providence Industrial Estate, about three kilometres south of the Seychelles capital of Victoria the artisanal fishing port, which has a 110 metre long quay, with a 2.5 metre water draft in the access channel and alongside the quay, among other facilities was officially opened in June 2010.

Currently, the port is designed for artisanal as well as semi-industrial fishing activities and can accommodate boats measuring up to a maximum of 21 metres long.

According to SFA, with much focus on the blue economy - a concept Seychelles is promoting, as well as more investments in fisheries and boats and the decline in piracy activities; the sector has been booming, thus necessitating the need for more port facilities.

The Deputy Chief Executive Officer of the SFA, Roy Clarisse, explained to SNA that the proposed extension is 19 metres long.

“So far the Japanese government has made two assessment visits to the Port; one in April and another in June this year in order to give the government a final decision on the matter by the end of the year,” said Clarisse.

The extension of the Providence fishing port forms part of a request by the island nation for a 7th Fisheries Grant from the Japanese Government which was discussed when the new Japanese ambassador to Seychelles was accredited in May last year.

The Japanese State Minister of Foreign Affairs Minoru Kiuchi, who was on a one-day visit to the country, furthered discussions on the matter when he met with Seychelles President James Michel, at State House in the capital of Victoria ahead of his visit to the port facilities.

Aside from fisheries, renewable energy and climate change mitigation, capacity building, maritime security cooperation including the fight against piracy, human rights are some of the other areas of common interest that were discussed between Michel and Kiuchi.

“We both agreed to continue our cooperation in areas such as maritime safety including counter- piracy measures and also fisheries and disaster risk reduction,” Kiuchi told local journalists in an interview at the end of his talks with the Seychellois Head of State.

In a press statement issued yesterday afternoon, State House said Michel had also used the opportunity to thank Japan for its support in the fight against piracy as well as fisheries development in Seychelles and the region.

“We will increase our efforts to develop more tourism and aviation partnerships as well as extend the areas of our existing projects of renewable energy development. Our policy is to democratize the access of renewable energy for all Seychellois, and Japan’s assistance and expertise will be welcomed to achieve this aim,” said Michel in the statement.

Their discussions also touched on the possibility of increasing the import of cars from Japanese manufacturers following the island nation’s recently introduced measures to abolish duties on all electric vehicles previously set at five percent and to reduce duties on hybrid vehicles from 15 to 5 percent.

Climate change challenges faced by small island developing states, especially coastal erosion as well as the projects that could be developed to prevent the erosion taking place was also on the cards.

In the same light, Kiuchi also visited some key projects funded by the Japanese government including a storm water outlet at Au Cap, a district on the eastern coast of Seychelles main island of Mahé.

The project was undertaken by the Japan International Cooperation Agency, JICA, as part of its coastal erosion and flooding management projects. This was after the country was hit by the effects of Tropical Storm Felleng in early 2013 which caused severe flooding in several areas of the main islands of Mahe, Praslin and La Digue.

This is one example of at least three such projects implemented by JICA which already has a long-standing history of successful environmental projects with Seychelles.

Kiuchi left the island nation yesterday evening - a visit which the Japanese State Minister for Foreign Affairs who was leading a four-member delegation to Seychelles has said is set to further increase cooperation between the two sides.