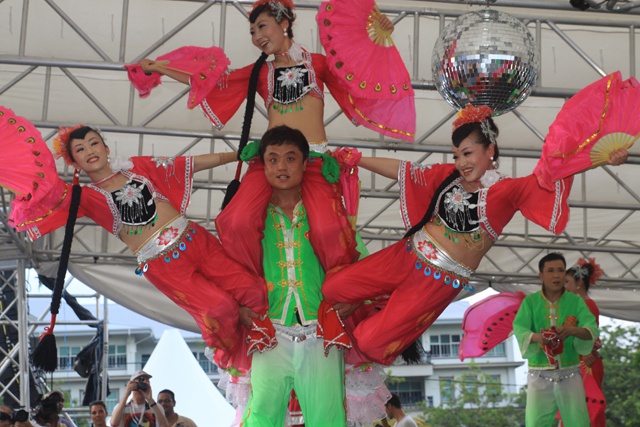 (Seychelles News Agency) - The Chinese delegation has been voted best international float at the fourth Seychelles Carnaval international de Victoria, announcement made as the carnival came to an end this evening at Freedom Square in the capital of Victoria.

China has grabbed the title from Nottinghill carnival that until today had won the best float title every single year since the first carnival in 2011.

This year Nottinghill has had to accept second place, while Brazil is the third best international float.

Locally things have also changed as JJ Spirit foundation accepted second place this year handing over the title for best local float to Raffles Hotel, based on the second most populated island of Praslin.

There were also prizes for the best schools that paraded on the main carnival day Saturday April 26.

The prize presentation ceremony just after sundown today led to the official closing of the three day gathering that has brought together the Seychellois nation, visitors, 26 international delegations and 151 international journalists.

The Seychelles Minister for Tourism and Culture Alain St Ange and Seychelles Tourism Board’s Chief Executive Sherin Naiken both described this year's carnival as a great success congratulating the efforts of their dedicated partners as well as the participation of the Seychellois people.

As this year’s carnival comes to an end, April 24 to 26, 2015 have already been set aside for the fifth Carnaval International de Victoria.

This was announced by St Ange during the official launching of the carnival where he called on people from all corners of the world to be in the Seychelles next year making it the ‘Seychellois homecoming.’

WHO mission to China fails to find source of coronavirus