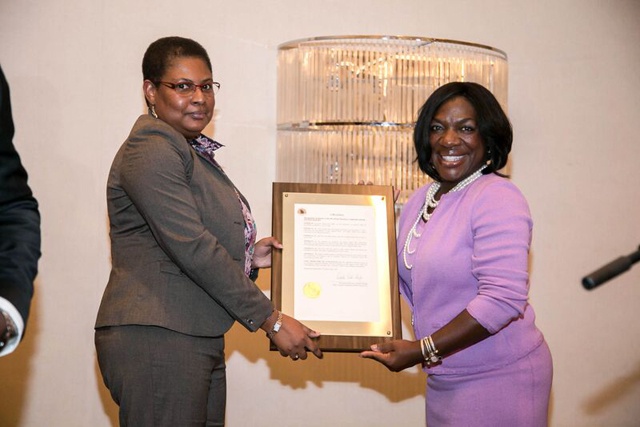 Seychelles CBS Governor has been awarded the African Female Public Servant of the Year Award by the African Leadership Magazine, as well as a Special Commendation Award from the US Georgia Legislative Black Caucus. (Central Bank of Seychelles)

(Seychelles News Agency) - The Governor of the Central Bank of Seychelles, CBS, Caroline Abel, has been honoured with two awards during the 6th African Business Leadership Forum and Awards.

Abel was presented with the African Female Public Servant of the Year Award by the African Leadership Magazine at the event which took place in London on July 25.

According to a statement issued by CBS yesterday afternoon, the African Leadership Magazine has said that the award is in recognition for Abel’s “remarkable leadership role and consistent contribution to banking reforms in Seychelles which has had a positive impact on the country as a whole.”

Seychelles’ President James Michel was similarly awarded the African Development Excellence Award during the second US-African Investment Forum, held in New York in September 2013, while the former Seychelles Minister of Finance, Trade and Investment, Pierre Laporte, was honoured as the Southern African Finance Minister of 2013 during the US-Africa Investment Forum awards ceremony held in Houston, Texas in May last year.

Abel was also honoured by US’ Georgia Legislative Black Caucus with a special Commendation Award.

The Special Commendation is presented by the largest legislative caucus in the State of Georgia House of Representatives for “outstanding contribution and service to humanity.”

According to the CBS statement she was nominated by the leadership of the African Leadership Magazine for the recognition in further recognition of her role “in boosting Seychelles’ banking sector and contributing to the country’s economic and social development.”

“Both awards are dedicated the Board, all staff of the Central Bank in recognition of their support, hard work and dedication, as well as my family,” said the CBS Governor in the statement.

Abel, who hails from the Anse Boileau district in the western part of the main Seychelles island of Mahe, is also the eldest daughter of Seychelles renowned poet and writer Antoine Abel, who passed away in 2004.