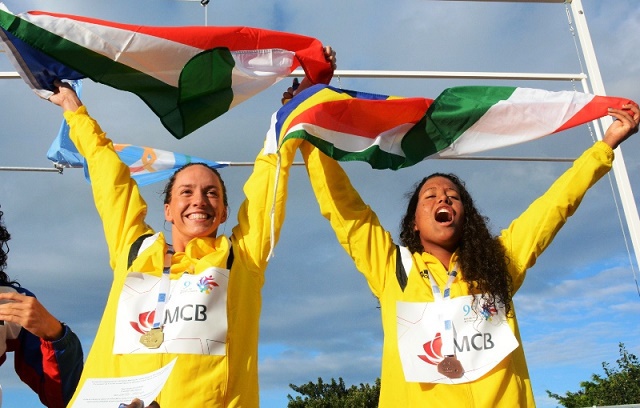 Seychelles swimmers Alexus Laird (left) and Felicity Passon raising the island nation's flag as they clinched the gold and bronze medals respectively in the 50-metre backstroke event on Wednesday at the 9th IOIG in Reunion. (Patrick Joubert, Seychelles Nation)

(Seychelles News Agency) - After remaining on one gold medal during the first three days of competition at the 9th Indian Ocean Island Games being held in Reunion, Seychelles' tally of gold has now gone up to eight.

The Indian Ocean archipelago's female weightlifters Ruby Malvina and Clementina Agricole confirmed that they are the best in their respective categories in the region following their impressive performance, which earned the Seychelles a combined number of six gold medals on Wednesday.

Competing in the 58 kg category Malvina lifted 81kg in snatch, 110 kg in clean and jerk which brought her total lift to 191 kg which was enough to earn her three gold medals ahead of a Madagascan and Mauritian, who won the silver and bronze medals respectively.

According to an article published this morning in daily newspaper Seychelles Nation, Malvina’s 110 kg lift in clean and jerk was a new record in her 58 kg category.

“I am so happy… as I not only managed to set a new personal best, but I also set a new record which I am very proud of,” said Malvina in the Nation article.

The same feat of winning triple gold was achieved by Clementina Agricole in her 63 kg category.

Agricole, who is Seychelles' Sportswoman of the year 2014, lifted a total weight of 202 kg (91 kg in snatch and 111 in clean and jerk) leaving again the silver and bronze medals to a Madagascan and Mauritian athlete respectively.

Both Malvina and Agricole were triple gold winners in the last Indian Ocean Island Games held on home territory in 2011. Seychelles completely dominated the discipline in 2011, winning 30 out of a total of 45 gold medals up for grabs.

Apart from the 6 gold from the two female lifters, male lifter Ian Rose was also on the podium to collect 2 bronze medals in the 69 kg category yesterday.

Laird’s powerful performance not only earned her the top spot on the podium ahead of Reunion’s Aïnoa Boucher but her timing is also a new IOIG record and has also improved the Seychelles record by 2 seconds.

“I am very happy and very excited. I hope this gold medal will motivate everybody for more medals,” Laird was quoted as saying by Seychelles Nation.

The other Seychellois swimmer competing in the same 50-metre backstroke, Felicity Passon managed to come out third winning the bronze medal.

Passon was also in action in the 200-metre freestyle race where she clinched the silver medal and she also teamed up with Alexus Laird, Leyla Rigamonti and Anisha Payet to win the 4x100 metre freestyle relay’s bronze medal.

Seychelles won two other bronze medals on Thursday in athletics as a third place finish was achieved by the 4x100-metre relay team and Rennick Belize in the 10,000-metre race walking event.

Hope for more medals for the Indian Ocean archipelago at the 9th IOIG lies in the Seychellois pugilists as 5 of them have made it to the finals to be held on Friday. Among the lot is Seychelles Sportsman of the year 2014 Andrique Alissop.

It is also hoped that the collective sports disciplines; the men’s volleyball and basketball teams as well as the women’s volleyball team that won gold in 2011 will hold on to their title. This was not the case for football which relinquished the title as the national team failed to go past the group stage.

Host nation Reunion Island is currently occupying first place on the medal table with 35 gold medals ahead of Mauritius and Madagascar with 32 and 28 gold medals in their rank respectively.

Fourth placed Seychelles is far from reaching its harvest achieved on home territory during the last games in 2011, where a total of 123 medals were won, including 57 gold medals.