Whale, I’ll be! First humpbacks of the season spotted off Seychelles atoll of Aldabra 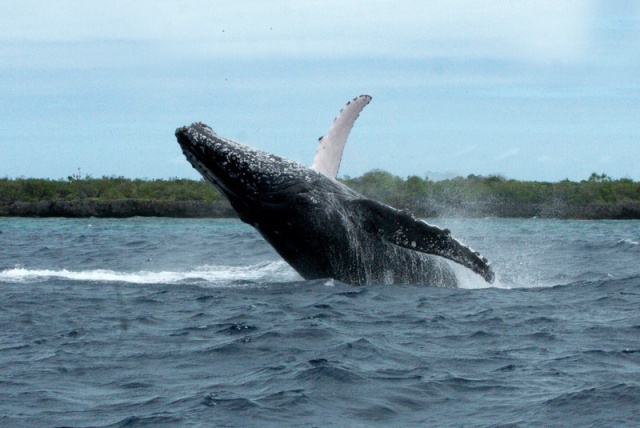 File photo: a humpback whale is snapped breaching spectacularly out of the water off the coast of Aldabra in a previous season (Seychelles Islands Foundation/Naomi Doak)

When one thinks of the UNESCO World Heritage Site of Aldabra, one of two in the Seychelles archipelago of 115 islands, the mind wanders from one natural spectacle to the next: the world’s largest population of giant tortoises, nesting turtles, giant coconut crabs, lemon shark pups, pristine coral reefs teeming with life, dugongs and even the occasional flamingo.

But this protected and isolated group of islands in the western Indian Ocean, one of the largest raised coral atolls in the world, also plays host to a spectacular migratory species each year: that of the humpback whale.

The Seychelles Islands Foundation (SIF), the public trust which has managed the area since it took over from the Royal Society of London in 1979, has an outpost for researchers and conservation rangers in this beautiful but inhospitable environment, where the giant tortoises can scarcely prevent the sun’s heat from baking them in their shells.

In their tiny huts with corrugated tin roofs, some 1,000 kilometres away from the bustling main island of Mahe to the east, SIF’s Aldabra team are out in the elements, tripping over jagged coral rocks and cleaning up marine debris washing up from the ocean.

However, these stoical men and women of science are reduced to puddles of emotion around the end of July when, the south-eastern trade winds bring past pods of humpback whales, which migrate thousands of kilometres north from the cold waters of the Antarctic to warmer waters in order to mate and breed.

April Burt, SIF’s Aldabra Scientific Coordinator, told SNA in an email interview that those humpbacks which frequent areas around Aldabra are the same group which migrates to the East African coast, Southern and Eastern Madagascar and the Northern Mozambique channel islands.

The giant cetaceans, which can measure up to 16 metres long and weigh up to 36 tons, feed on krill and small fish in the sub-Antarctic (and in the Northern Hemisphere, the sub-Arctic), then making the long and arduous journey - up to 25,000 kilometres - up to warmer waters for the winter season in order to mate and calve.

Burt describes the atmosphere around the research base at the start of whale season, saying she was “nearly deafened” by Aldabra ranger Stephanie Marie’s “squeals of delight” at first spotting the humpback whales.

“For myself and the other Aldabra staff - all of whom are passionate about nature and particularly the ocean - these awesome creatures are fascinating to us,” she said. “The atmosphere on the station was a little bit like Christmas morning as a child.”

The team observe from Settlement Beach, where the whales swim and play close to the reef. Humpbacks are acrobatic creatures, known for breaching and slapping the water with their tails and pectoral fins.

“All of us wish we could see them closer but respect they are free and wild animals, as all wildlife on Aldabra we keep our distance and do not interfere with nature,” said Burt.

“So far we have had five separate sightings but one of these had three groups seen at one time with at least two in each group,” she added.

In past seasons, she said, as many as 98 separate sightings have been made of 169 individuals, although it is not possible for the team to know whether these were repeat sightings of the same individuals or not.

Burt explained that although no specific research on the whales’ ecology and habits had been conducted from Aldabra thus far, the team does share photographs with a cetacean identification organisation called Globice based in Reunion island, which uses photographs of the tail flukes to identify individuals.

“We are hoping to find a match. This will provide further insight into the movements of humpbacks within the region.”

Sometimes they are lucky enough to spot mothers swimming with their calves.

“If you get a clear sight sometimes you can spot a calf with an adult, obviously there is a size difference and last year the rangers witnessed the calf mimicking the tail slaps of its mother. So far no-one had got close to a calf to see it clearly,” she told SNA.

Operating under strict wildlife observation guidelines, the team is very careful to ensure that the whales are not disturbed, even though the members of the research team would personally love to get the opportunity to encounter the gentle giants underwater while diving along the reefs.

According to Burt, the Seychelles archipelago, including the Amirantes and Aldabra, was an important whaling hunting ground for American whalers during the 19th century, when the humpbacks were hunted to the brink of extinction for their whalebone, oil and meat before a moratorium on their exploitation was introduced in 1996.

Since then, their numbers have increased to an estimated 80,000 individuals worldwide.