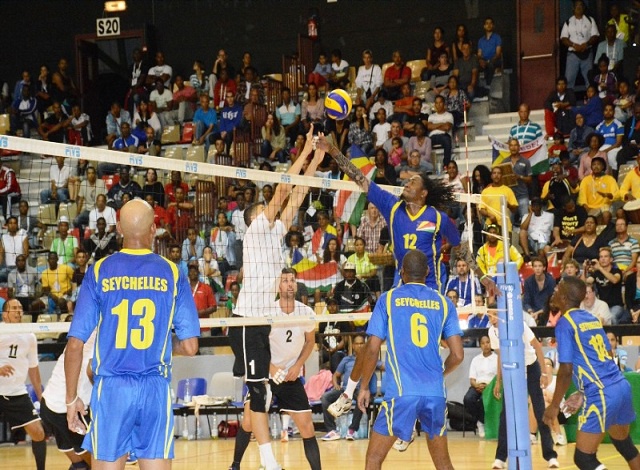 The Seychelles men's volleyball team in action in the final yesterday evening.(Seychelles Nation)

(Seychelles News Agency) - The Seychelles women's volleyball team have clinched the gold medal after winning the event's final at the 9th Indian Ocean Island Games in Reunion this Saturday.

The Seychellois ladies won the match 3-1 against Madagascar.

This was the island nation's last hope of retaining at least one title in the collective sports at the Indian Ocean Island Games in Reunion as the other teams that won the gold medal on home territory four years ago have relinquished their title.

Playing in Reunion's "Stad de L'est" yesterday evening, the Indian Ocean archipelago's national volleyball team started off well keeping fans all the way in Seychelles at the edge of their seats in the highly contested first set which ended 25-22 in Seychelles favour.

The match was transmitted live from Reunion by the national television, the Seychelles Broadcasting Corporation, SBC.

The Reunion team came out stronger in the second and third sets as Seychelles tried to catch up to the score, but the host team maintained their lead winning both sets 25- 14 and 25-17, respectively. With the 2-1 lead it was evident that Reunion wanted to grab the gold medal from its opponent as the players fought hard to win the fourth and last set 25- 22 winning the final match.

The Seychellois players had no choice but to accept the silver medal.

In Men's basketball, Seychelles will today be playing against Mauritius in an attempt to win the event's bronze medal after it's 59-75 defeat against Reunion in yesterday's semi finals put an end to the Seychellois players' quest to retain their gold medals won on home territory in 2011.

Nevertheless, there were some good results for Seychelles on Friday as table tennis, boxing, laser and swimming won the country five more gold medals.

Alexus Laird completely dominated the backstroke races at the IOIG as she won her third gold swimming in the 200metre backstroke on Friday where she once again established a games record and improved the Seychelles record.

In boxing, Keven Kilindo and Keddy Agnes won gold in the finals 91kg and +91kg categories respectively. Seychelles' two other gold medals on Friday came from sailor Allan Julie in laser and table tennis player Anniessa Benstrong who won the ladies singles final retaining her gold medal won at the last games in 2011.

At the end of the third day of competitions Seychelles had 22 gold, 33 silver and 27 bronze medals which is far from the feat achieved on home territory in 2011 where the island nation won 123 medals in total including an impressive 57 gold.

Today is the last day of competitions as the 9th Indian Ocean Island Games in Reunion will officially come to an end tomorrow.