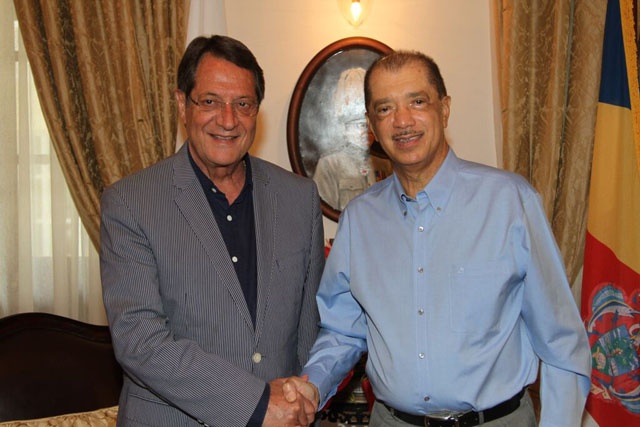 The President of Cyprus Nicos Anastasiades meeting with President James Michel at State House. (Office of the President)

(Seychelles News Agency) - The strengthening of cooperation in the fields of tourism, trade and investment between Seychelles and Cyprus as a means to boost exchanges between the two countries. This is what was discussed during talks between the Seychelles President James Michel and the President of Cyprus Nicos Anastasiades.

The Cypriot president called on President Michel at State House, on Friday last week, while on a private visit to the Indian Ocean archipelago.

In a press statement issued this afternoon, State House said the two Heads of States also talked about the Joint Seychelles-Cyprus Commission already in place to strengthen bilateral relations in various fields as well as the development of maritime resources and tourism which are considered to be of utmost importance to the two island nations.

“We have had the opportunity to work very closely with Cyprus at the multilateral level mainly through the EU, the Commonwealth and the United Nations. In all these fora, we have appreciated the support of Cyprus on SIDS issues, including the Blue Economy, and Climate Change,” said Michel in the statement.

It is to be noted that Seychelles and Cyprus share strong historical links due to the exile of Archbishop Makarios to the island nation in March 1956, when Seychelles was still under British Colonial rule.

Archbishop Makarios who became the first President of Cyprus in December 1959, after Cyprus was declared an independent republic, spent some 13 months in exile before he was allowed to leave Seychelles together with his fellow Cypriots in April 1957.