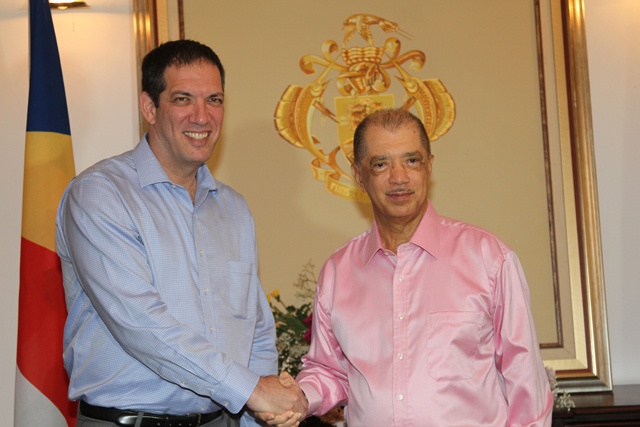 (Seychelles News Agency) - Keeping the steadily increasing numbers of Israeli tourists to the Seychelles archipelago on an upward trend has been named as one of the top priorities in diplomatic relations between the two countries.

This announcement was made as a new Israeli ambassador to the Seychelles, Yahel Vilan, presented his credentials to the archipelago’s President, James Michel, on Tuesday at State House in the Seychelles capital of Victoria.

Ambassador Vilan is the 7th non-resident ambassador to be accredited to the Seychelles since the establishment of formal diplomatic relations on June 30, 1992, replacing former Ambassador Gil Haskel, who was appointed in October 2011. The post is based in Nairobi, Kenya.

According to a press statement issued by the Office of the President on Tuesday afternoon, the President and the Ambassador discussed several areas of future cooperation such as agriculture, renewable energy, water provision, tourism, aviation, education and training.

“Your Minister for Tourism was just in Israel a few weeks ago, and he discussed with our side how to bring more Israeli tourists here," Ambassador Vilan told members of the local press after the accreditation meeting. "I wish to have also more people from Seychelles coming to Israel both for pilgrimages as well as any other general tourism. So there is a lot to do together and the friendly relations are there."

According to figures from the Seychelles National Bureau of Statistics (NBS), the number of Israeli visitors arriving in Seychelles during the first half of 2015 totalled some 795 individuals, compared with just 459 for the same period the previous year, representing an increase of around 73 percent

Ambassador Vilan also spoke to President Michel about the ways that Israel's Agency for International Development Cooperation (MASHAV) might be able to assist Seychelles in its development.

"We... discussed the option of sending some more trainees from Seychelles to get trained in Israel under our programme called MASHAV, operated by the Ministry of Foreign Affairs, in fields like agriculture and education," said Vilan. "I believe there is a lot of potential for relations in these various fields and we will have to see what is the best way to explore and bring these relations to a higher level."