Giving a sense of ownership to the people: first district council elections in Seychelles in over two decades planned for 2016 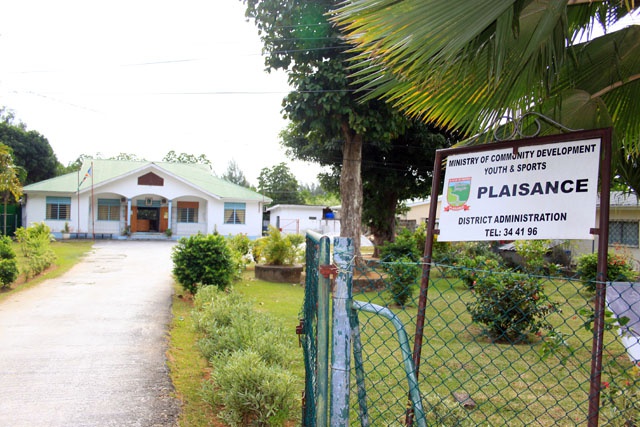 The Administration Office of Plaisance, a district on the eastern coast of the main Seychelles island of Mahe. District Council elections are expected to be held in Seychelles in 2016. (Joe Laurence, Seychelles News Agency)

(Seychelles News Agency) - While people in Seychelles are used to voting in the presidential and legislative elections, which are held every five years, they will soon be called upon to also elect a group of people to manage the day-to-day running of their respective districts.

This is now that the Indian Ocean archipelago of 115 islands with a population of around 90, 000 people will be re-introducing district councils, with the first election planned for the second half of 2016.

The National Assembly recently approved the ‘Local Government Bill 2015’, which makes provision the election of the five-member council comprising of a chairperson and four councilors.

The new law was announced by the Seychelles President James Michel in his National Day address on June 29, during which he highlighted the government’s intention to involve the population more in governance and in decisions that concern their everyday lives of their community.

“It will provide for every district to have a District Council which is directly elected by the residents of the district. This is yet another important step in the evolution and strengthening of our democracy,” said Michel.

Although the 25 electoral districts presently have administrators who are appointed by the Ministry for Community Development, Social Affairs and Sports, the election of district councils is not new to Seychelles.

Back in the 1950’s and 60’s, during the time the archipelago was still a British colony there was the election of what was known as the Victoria district council.

Over the years that followed the country’s Independence this eventually stopped, before district councils were re-introduced in 1991. At that time, the chairman of the councils was also the national assembly member for the respective districts.

When Seychelles entered the third republic which saw the return of the multi-party system there were “divergence” on the issue among the existing political parties.

“One of the matters of disagreement was the subject of local governance. In order for the country to continue to progress, it was agreed on to dissolve the district councils. This was to ensure that there is a consensus between all the parties,” the Minister for Community Development, Social Affairs and Sports, Vincent Meriton told SNA in an interview.

“[Nevertheless] it remains part of the Seychelles constitution, under article 167; that the government can apply a local government mechanism it feels is appropriate,” he added.

While the government feels that the actual district administration “has well matured in over 20 years of existence and served its purpose of allowing the government to identify the needs of the community” Meriton said the time had come to relook at the system, which is aimed at allowing the population to take ownership of their district and be more involved in addressing the issues and challenges that arise.

“District councils exist in various countries across the world, but our model is home-grown taking into account the size of the country,” Meriton explained while adding that this does not include the election of the Mayor of Victoria.

According to the ‘Local Government Bill 2015’ once elected the district councils will be able to act independently to develop and implement their various plans and projects while they will also be able to collaborate with concerned ministries and stakeholders including the private sector.

In recent years, the government has allocated an annual budget of some $2.3 million (30 million Seychelles rupees) to the community development ministry which is distributed among the 25 districts to finance community-related projects.

The district councils will also be able to raise money on their own for the implementation of various schemes and programmes in the districts.

Community Development to be the overseer

While the new system is expected to reduce the actual role and day-to-day involvement of the ministry for community development, it will hence become the monitoring body.

“The ministry is expected to ensure that the works of the council are up to standards, conducting constant evaluation to make sure that people are getting value for their money and that the money is being well spent,” said Meriton.

The community development ministry is currently working with other partners including the finance ministry and public administration department to prepare the code of conduct for the district councils.

“This includes the frequency of their meetings, contract terms and allowance, and how they would identify and implement the district projects and more,” said Meriton.

“Candidates should be a resident of the district they are contending. They should be more than 18 years of age, no mental illness record, and no criminal record, as well as certain people skills such as involvement in activities in the community.”

The Chairperson of the council and the four councilors who are elected will be expected to discharge their functions on a part-time basis will also be the ones tasked with appointing a district administrator.

The election of the district councils will be held every five years and will be supervised by the office of the Electoral Commission.

The new law, which was passed before the national assembly on August 04, was assented by the President  on August 10, 2015.