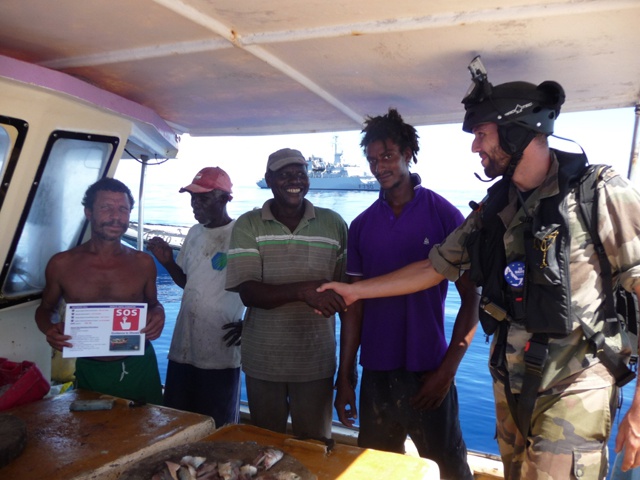 Seychellois fishermen with an officer of the FS Floréal of the EUNAVFOR (EUNAVFOR) Photo license: CC-BY

(Seychelles News Agency) - The EU Naval Forces (EUNAVFOR) have reported today that French warship FS Floréal assisted four Seychelles fishermen who were stopped in the water having suffered an engine failure on their way back to the Seychelles in the Indian Ocean, according to an EUNAVFOR press statement issued this afternoon.

"FS Floreal was just a few hours from the Seychelles when she saw the small vessel signalling for assistance with a large cloth. The frigate immediately dispatched its sea boat with an engineering team and the ship’s doctor embarked. The boat crew also took food and water supplies with them, which were urgently required as the boat had been adrift for over 48 hours, " said the statement.

The four Seychellois men were not hurt during the incident and are reported to have expressed gratitude for the assistance after two hours of repair work by the engineers from the Floréal, says EUNAVFOR.

The fishermen returned to their homes on Praslin island, the second most populated island of the Seychelles archipelago.

The French warship was recently in Port Victoria, the main port of Mahe, the principal island,  for a four day port visit.

FS Floréal forms part of the European Union’s Counter Piracy Mission off the Coast of Somalia, having joined the mission on April 18, 2014.

General » Be a reporter: Write and send your article » Subscribe for news alert
Tags: EUNAVFOR, Praslin