The Central Bank of Seychelles possesses two 50 rupees notes with the letters "SEX" highly sought after by collectors. 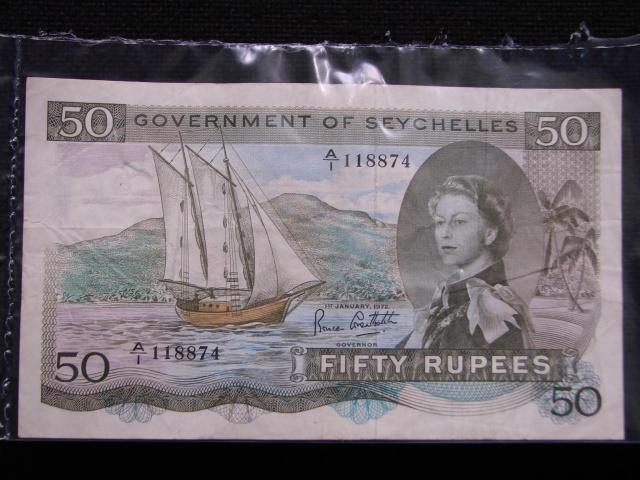 (Seychelles News Agency) - Back in the 1970s, the Seychelles archipelago in the Indian Ocean formed part of the British Empire, until it got its independence in 1976.

At that time, there was a 50 rupee banknote (equivalent of $4) with the portrait of Queen Elizabeth II of Great Britain, with her head shown near some coconut trees.

This banknote was withdrawn from circulation in 1973.

Until recently, nobody showed any interest in this note until the BBC announced that the firm Duke's of Dorchester which is specialized in holding auctions was going to put on offer for sale of these notes which have the letters "SEX" next to the head of the Queen of England. The auction should be held in October.

For the Central Bank of Seychelles CBS, this information is not new.

"According to researches we conducted for the book on the history of Seychelles money, we discovered an article dated from 1972 which reported over the letters 'SEX' near the head of the Queen on the note, we published the book, in 2007 and 2008," explains the head of banking services Mike Tirant to the SNA.

At the Central Bank of Seychelles, there are two 50 rupees notes with the portrait of the Queen issued in the 1970s.

The Central Bank of Seychelles keep these notes as archives and they are not to be sold.

"If someone comes to the bank to change one of his old banknotes, the bank will exchange it for a 50 rupees note," adds Tirant.

In the book of the Central Bank of Seychelles on the history of Seychelles currency, the value of the note was estimated at £ 100, but today it would be worth £ 200.

"The older the note the more valuable it becomes, this is how the collector’s item works" added Tirant.

Notes that are put into circulation in the country are done under the supervision of the Central Bank of Seychelles.

"We try to take all necessary measures to ensure that there are no hidden entries ... but in the end it's a question of interpretation," he said.

Tirant also specified that the notes that were published in the year 1979 to 1983 are also highly demanded by collectors because they were the first bank notes issued by the Central Bank of Seychelles as the monetary entity.

Finance » Be a reporter: Write and send your article » Subscribe for news alert
Tags: note, Central Bank of Seychelles