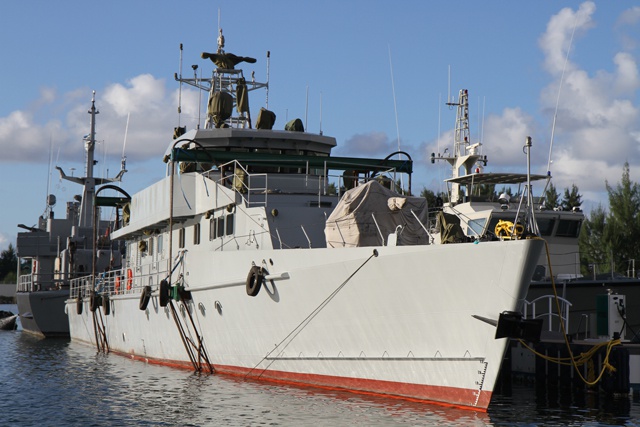 (Seychelles News Agency) - A newly built armed patrol vessel has arrived in the Seychelles, as a gift to the Indian Ocean maritime nation from the Chinese government.

Seychelles Foreign Affairs Minister Jean-Paul Adam, the Chinese Ambassador to Seychelles Shi Zhongjun and high ranking officials of the Seychelles military received the vessel, a Type 62 Class Gunboat (Shanghai class II NATO designation) at the Seychelles Coast Guard base at Ile du Port this afternoon. It had been transported to the islands onboard a cargo ship.

Adam thanked the Chinese government saying the donation was a first of its kind because Seychelles had been involved right through the manufacturing process of the boat including its design.

“This is a purpose built vessel for Seychelles and follows the visit that President James Michel made to China in 2011 where he shared with the Chinese authorities and at that time Vice President Xi Jinping, who is now of course the president of the People’s Republic of China, where he shared the concerns that Seychelles has with regards to the patrol and monitoring of its vast exclusive economic zone,” said Adam.

“China has always been a country that has recognised the development constraints that Seychelles face and trying to adapt solutions which fit the requirements of Seychelles and this is an example of a resource which is very much adapted to the needs of Seychelles which will help us safeguard all of the potential that we are talking about in terms of the blue economy.”

The Chinese ambassador said the vessel comes two years after the leaders of the two countries reached an agreement for China to donate the vessel to the Indian Ocean island nation.

“I am very happy that the boat is in Seychelles we all know that Seychelles is in the forefront in the fight against piracy, we appraise the efforts and the leading role of Seychelles fighting against piracy we also appreciate Seychelles role in maintaining the peace and security in the Indian Ocean,” said Zhongjun.

Officials did not disclose the cost of the ship.

Several parts of the ship remain to be assembled and fitted on the boat before it is commissioned and officially handed over to the Seychelles Coast Guard during the island nation’s National Day celebrations on June 18.

Seychelles has been at the forefront of the fight against Somali piracy in the Indian Ocean, having undertaken three naval rescue operations at sea where hostages were released alive.

The island country prosecuted the largest number of Somali pirates between 2009-2013. To date 124 pirates have been convicted. Most of them have been repatriated to Somalia to serve their sentences. 23 remain in Seychelles’ Montagne Posée prison awaiting trial.

Port Victoria, the port of the capital of the Seychelles archipelago, is also a popular port of call for rest and recreation for military vessels based in the Gulf of Aden and Horn of Africa involved in different international anti-piracy missions in the region, including Operation Atalanta, the European Union’s counter-piracy operation off the coast of Somalia, as well as NATO and Combined Maritime Forces operations.

In December 2011, AFP news agency reported that China was invited to set up a military base in Seychelles. Seychelles and China both denied the reports, saying the Seychelles foreign minister had been misquoted. Chinese vessels had been invited to use the Port of Victoria for rest and recreation as part of an increased anti-piracy presence in the region, together with other foreign navies.