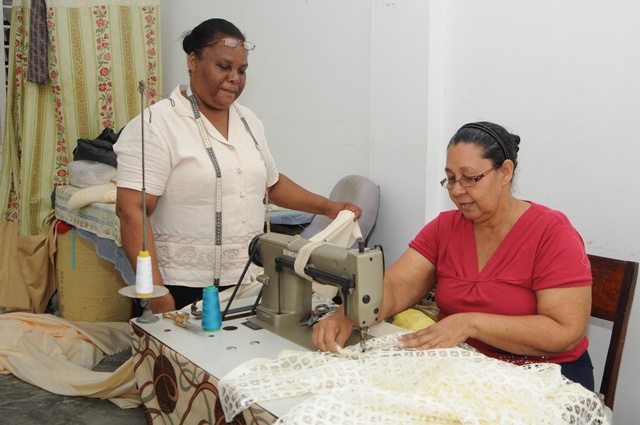 Two Seychellois women entrepreneurs Dona and partner Naomi busy at work at their workshop 'Friends tailoring' at Providence. According to a new report on the economic status of women in the Indian Ocean Rim region, Seychelles has an 80 percent startup rate of companies by women each year. (Patrick Joubert, Seychelles News Agency)

(Seychelles News Agency) - The role of women in the society, their empowerment and participation in economic development were at the centre of discussions in the Seychelles this week, as delegates from Indian Ocean Rim countries were provided with an analysis of the economic status of women in the region, which places the Indian Ocean archipelago ahead in some areas.

This was an opportunity for the participants to share good practices on ways to get more women involved in the economic development of their respective countries and also address challenges that are hindering women's empowerment.

Their discussions were based on the outcome of a study initiated by the Indian Ocean Rim Association (IORA) last year, to analyze women's participation in economic development in its respective member countries, either through employment or as entrepreneurs.

The report contains data gathered in recent years by several international organisations, including the World Bank and International Labour Organisation.

Seychelles, an Indian Ocean archipelago of 115 islands with a population of around 90,000 people is said to have a comparatively high percentage of women participating in management roles and women starting up new businesses.

According to the publication, the first of its kind commissioned by IORA, Seychelles has a 41 percent rate of women in management roles compared to a much lower IORA average and an even higher start-up rate of companies among women.

The finding were presented during a two-day conference focusing on ‘Mobilising Markets and Commitments to Gender Equality in the Indian Ocean’, held at the Savoy Hotel, at Beau Vallon in the northern part of the Seychelles main island of Mahé.

The event was organised by the IORA in collaboration with the Seychelles and Australian governments and the United Nations organization dedicated to gender equality and the empowerment of women.

“The Seychelles leads on so many indicators, 41 percent of women in management roles, the IORA average is much lower. You [Seychelles] have 80 percent start-up rate of companies by women each year… the worldwide figure is about 30 percent. So you’re about two and a half times the global average for women starting up new businesses,” said Meg Jones, the Chief Economic Empowerment of UN Women [the United Nations organization dedicated to gender equality and the empowerment of women].

“I think this is one of the reasons, why the government of Seychelles has been awarded with a gender parity award recently, in a leading African conference [the 25th AU Summit in South Africa]. It is because of leadership shown by Seychelles...”

IORA was established in March 1997, with the aim of promoting the sustainable growth and balanced economic development of the Indian Ocean region and to create common ground for regional economic co-operation.

Gender empowerment is considered one of the priority areas of the association, which has a total of 20 member states and a number of other countries that are considered dialogue partners.

The conference held on Monday and Tuesday this week in the Indian Ocean archipelago, follows the first such meeting to discuss the issue of gender equality, which took place in Kuala Lumpur last year.

Some of the Seychellois women in management positions or doing their own business also got the chance to participate.

Isabella Houareau, the Managing Director at Socomep [a fisheries company], told SNA that she had never found it difficult to succeed in the typically male-dominated sector.

“The conference is important because it has allowed us to discuss the significant role of women in the economic development of our respective countries. Compared to other countries, I don’t see much difficulty for women to get into business here in Seychelles. I think hard work is the basis for all things [...] I never felt like the laws were a problem for me, as a woman I always feel confident in my work.”

According to the Chief Executive of the Small Enterprise Promotion Agency (SENPA) Penny Belmont, the policies in place in Seychelles are favourable for both women and men to start up a business.

“At the moment 75 percent of businesses registered with SENPA are based on the ideas of women. They are the ones starting a business, at times with the backup of their partner. The Ministry of Investment, Entrepreneurship Development & Business Innovation is the body mandated to draft policies for the ease of doing business; such policies are not just for women but for all in the society. There are a lot of agencies and departments that support people to start their business. What we need is to use the examples from other countries in this conference to help us make our system more efficient,” said Belmont.

Nevertheless, the Chief of the Economic Empowerment section of the United Nations organization dedicated to gender equality and the empowerment of women, Meg Jones has identified some weaknesses in Seychelles among, which include the provision of child care facilities for infants.

“After the three months maternity leave the child care centres seem to be somewhat limited," said Jones adding that there are good examples in other countries where the law prescribes that "businesses must provide child care facilities to staff."

Speaking at the opening of the conference on ‘Mobilising Markets and Commitments to Gender Equality in the Indian Ocean’on Monday, the Seychelles Ambassador for Women and Children, Dr Erna Athanasius noted women have often faced discrimination and persistent gender inequalities worldwide due to several factors including ethnicity.

Recommendations brought forward following the two-day meeting and several visits targeting women engaged in economic activities across various sectors of the economy, have been compiled in a document dubbed “the Mahé consensus.”

“What we are seeking to achieve through the recommendations, is acknowledging for example unpaid care work, looking after children and how it impacts women’s participation in the labor force. We are looking at good practices that others can replicate to foster the economic empowerment of women in the IORA region,” Jones explained to SNA.

Australia currently holds the chairmanship of the IORA, until the end of this year when Indonesia will take over the mandate.