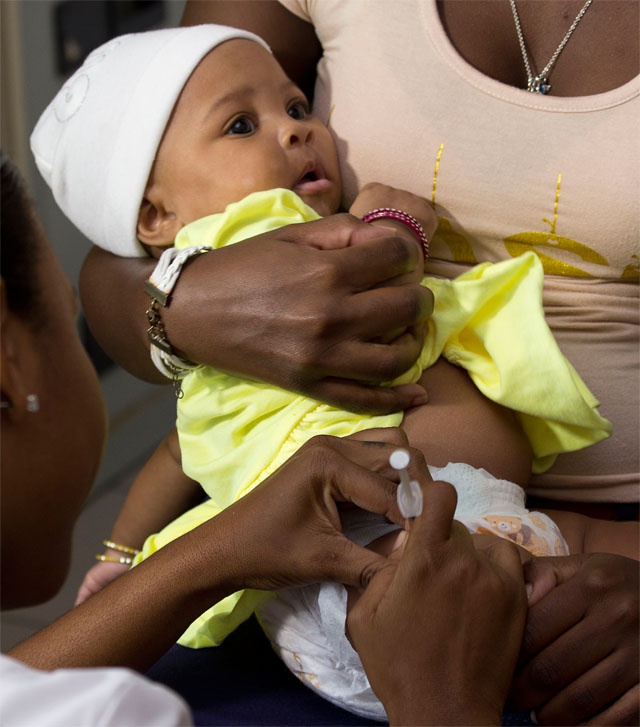 (Seychelles News Agency) - Seychelles, an Indian Ocean archipelago of 115 islands with a population of around 93,000 people has joined global efforts to introduce a new form of polio vaccine, the Injectable Inactivated Polio Vaccine, (IPV).

As of today September 1, four-month old babies due for their second dose of the polio vaccine are being administered with the IPV alongside the existing Oral Polio Vaccine (OPV).

The Oral Polio Vaccine (OPV) has for many years been the primary tool used in the global polio eradication effort. According to World Health Organisation figures, this has helped reduce global polio cases considerably, by more than 99 percent since 1988 when the eradication campaign was launched.

Adding one dose of the IPV to multiple doses of OPV is being viewed by health experts as the most effective method available to protect children.

“The OPV is a live vaccine and therefore there is this side effect were some children, 3 out of 1 million dose, will have paralysis as a result of the vaccine. It is very rare and is so uncommon but this side effect is not tolerable. We do not want to expose children to these risks,” the WHO Liaison Officer in Seychelles Dr. Cornelia Atsyor, explained to SNA.

The global introduction of the IPV, which will involve 126 countries including Seychelles with a targetted implementation date of the end of 2015, is expected to lay the foundation for the eventual withdrawal of all OPV vaccines from the respective countries' routine immunization programme.

However, this will only be possible once the poliovirus has been completely eradicated in the few remaining polio-infected countries, namely Afghanistan and Pakistan. Nigeria is the last African country, which achieved the one-year polio free status in July this year.

The virus which exists in three strains then multiplies in the intestines and from there invade the nervous system and as a result can cause paralysis.

Regardless of the progress, polio-free countries are still at risk of re-infection due to globalization, whereby the virus can be transported through travels between infected and non-infected countries.

According to WHO, the last case of Polio in Seychelles was registered in 1966.

Newborns in the Indian Ocean archipelago were until today being administered with OPV at the ages of 3, 4, 5 and 18 months after which they receive the drop once more at the ages of 6 and 15 years.

With the introduction of the new vaccine, it is only at four months that babies in Seychelles will be administered with the IPV, while at 3, 5 and 18 months and then at 6 and 15 years only the OPV dosage will be given until the OPV is withdrawn completely.

To better prepare health care providers working in the maternal and child health section, namely nurses, the Seychelles Health Care Agency has received the help of WHO to organize training to educate them on the need to introduce the new polio vaccine and the way it has to be administered.

“We trained 2 batches of nurses [32 in total] during the 2 day training sessions. It went well and most of them [the nurses] said that they feel confident to introduce the IPV at the health facility level,” said Florida Bijoux, the Expanded Immunization Program Manager, at the Ministry of Health.

Apart from polio, the Seychelles immunization programme provides for the protection of children against a wide range of diseases from yellow fever, tuberculosis, hepatitis B, measles, and tetanus among others.

Most recently with the help of WHO, the Pentavalent Vaccine which is a 5-in-1 vaccine against Diphtheria, Whooping Cough (or Pertussis), Tetanus, Hepatitis B and Haemophilus Influenza was also introduced among infants.

Vaccination against Human Papilloma Virus (HPV) which is the common cause of cervical cancer was also introduced last year, targeting 10 to 11 year old girls.

“We are in the process of introducing more vaccines such as the rotavirus vaccine which is against diarrhea and the pneumococcal vaccine [against the Pneumococcal disease] which causes brain and lung infection in children,” Dr Atsyor told SNA.

“The introduction will be evidence based. We don't want to introduce it when we do not have the budding of disease outlined to really convince the public and policy makers about the importance of the introduction.”