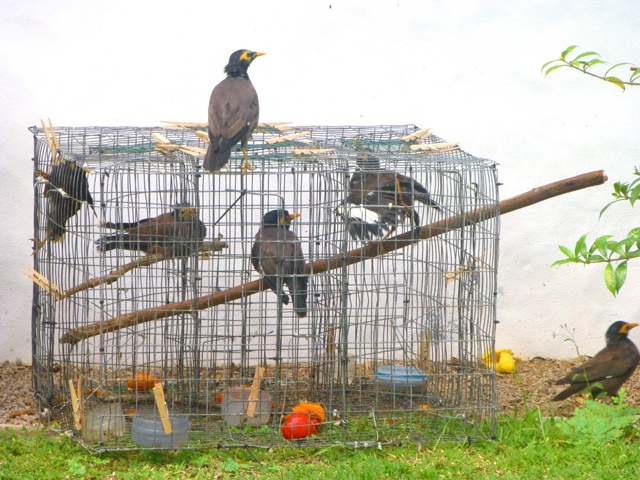 (Seychelles News Agency) - Traversing the lush and sometimes impenetrable vegetation of Denis island is not an easy task; more so when you are hunting for one of the most cunning avian invaders in the world, the common myna bird.

However, rangers from a non-profit organisation called Green Islands Foundation (GIF) have been doing this for the past four years as part of a myna eradication project on Denis island, which is operated as a private island luxury resort.

With its distinguished yellow beak, the highly intelligent dark brown bird, which is native to southern Asia, was first introduced to the Indian Ocean islands in the 19th century.

Since then, mynas have successfully invaded several of the 115 islands of the Seychelles including Denis, located 96 kilometres from the most populated island of Mahé.

The omnivorous bird can be aggressive to other bird species and have a strong territorial instinct, leading the myna to be declared one of the world’s most invasive species and one of only three birds considered as posing a significant impact on the world’s biodiversity by the International Union for the Conservation of Nature (IUCN).

“We initially estimated the population on [Denis] island to be around one thousand,” says Arjan de Groene, the manager of GIF.

Having already re-introduced several species of endemic birds to the island, the removal of predators such as myna birds was the final step towards the protection of these endemic birds and making the island a must-see for conservation enthusiasts visiting the Seychelles.

An eco-tourism plus and conservation milestone

For years, Denis Island was known only as a private island luxury resort until endangered birds unique to the Seychelles archipelago were translocated to Denis in 2004 as part of a Nature Seychelles conservation project. This included species such as Seychelles warblers, Seychelles fodies, Magpie robins and Seychelles flycatchers, all of which were on the verge of extinction on the populated islands of the archipelago.

However, even on the remote island, these species were not able to increase as expected due to predation.

After eliminating cats and dogs on the island, Green Islands Foundation then took on the arduous task of eliminating the common myna bird in 2008. At that time, the population of several of the endemic bird species stood at a mediocre number of twenty birds or less with some species, namely the Seychelles warbler and the Seychelles fody, remaining stagnant until 2010 when 90 percent of the mynas had been eliminated.

Since the program started, several new bird species have been spotted on Denis including the tiny nectar-drinking Seychelles sunbird, another endemic species to the Seychelles.

De Groene told SNA that at several points during the last four years the project was halted, which again resulted in an increase in the population of the predators.

Using traps and decoys, the last of more than a thousand myna birds was finally shot a fortnight ago, resulting in the island being declared completely predator-free.

Eradication programme a necessity for the survival of endemic species

“There is no standard way to know right away if the bird is completely eliminated, but one way to go about this is to use a decoy bird to attract the others. The decoy bird normally cannot fly, as we clip their wings so they cannot escape. It was shot two weeks ago after we had observed no other presence for three months,” de Groene told SNA.

“Another way to know if they are extinct is to observe for their presence for a period of two years, which is more time consuming,” he added.

Asked why the mynah bird had to be eliminated, he explained that in conservation sometimes human intervention is needed to protect nature from itself and in ensuring that endangered varieties are given a fighting chance to continue to survive.

According to the Green Islands Foundation, getting rid of an invasive species in order for an endemic or endangered one to survive is a common practice in the world of conservation.

In the case of the myna bird, the species was not only widespread on the island, but was in fierce competition for food and habitat with other species. Furthermore, using camera surveillance, the mynas were occasionally observed aggressively attacking other endemic species and destroying their nest.

“It is then that we saw that they [the endemic birds] were being attacked by the myna birds which explained a wound most of the birds had at the back of their necks,” he concluded, adding that a census of the endemic birds will soon be carried out to establish more precise population figures for endemic bird species on the island.

As its name suggests, Bird island is famous among birdwatchers for its spectacular colony of around 700,000 pairs of sooty terns, which nest there from March to October.

Denis island cannot hope to rival Bird island in numbers of birds, but in getting rid of its mynah birds, it may have stumbled on a blueprint to lure some of the birdwatchers to it.

“Denis island is the only island in Seychelles presently where the most number of endemic species can be seen in one place,” said de Groene.