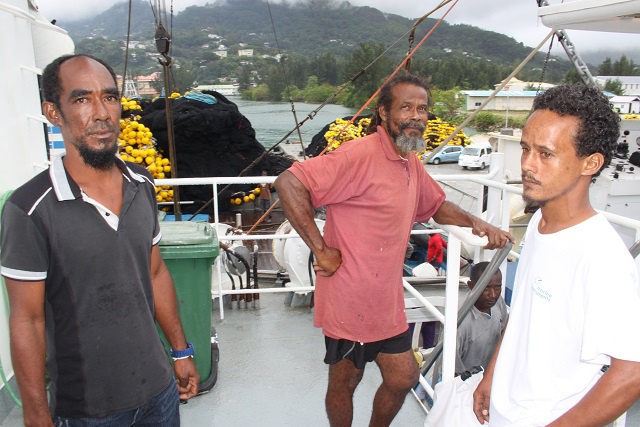 (Seychelles News Agency) - Three Seychellois men, Jean Pierre Pool, Robin Samson and Sandy Vidot, rescued at sea on Wednesday by a French-flagged purse seiner were brought back to the Seychelles Port of Victoria, this morning.

Franche-Terre, which belongs to Sapmer, one of the largest fishing companies of the Indian Ocean docked at the Ile Du Port quay after 8.30 am local time.

The trio claim to have been lost at sea for around 25 days after their vessel ‘Rocker’ was shipwrecked.

All three, Pool, Samson and Vidot appeared to be in good health as they made their way down from Franche-Terre this morning, although they were sent to the Seychelles hospital for a proper evaluation of their health condition.

This was only after they had been questioned about the circumstances that led to their ordeal at sea by officials of the Seychelles Maritime Safety Administration, SMSA, the police and the National Drugs Enforcement Agency, NDEA.

“When we received confirmation that they had been rescued we alerted all the relevant authorities…the police has been involved to ask question because normally when we have incidents of people getting lost at sea, parents, friends, or the boat owner come forward to report the incident. But when I spoke to the skipper today he indicated that he did not inform the authorities that they were heading out to sea and that only the families were aware and they were supposed to be out at sea for around 7 to 8 days. But until today nobody has contacted the authorities to report the three men as missing at sea,” the Director General of the SMSA, Captain Joachim Valmont told SNA.

None of the three men were willing to give an interview to the media about what had actually happened to them.

According to Valmont, through questioning this morning the Skipper and owner of the boat, ‘Rocker’, had indicated that they left the Seychelles second most populated island of Praslin on August 8 for a diving trip around the Amirantes group of islands, which lies over 200 kilometres away from the Seychelles main island of Mahé.

“According to the skipper and owner of the boat they were on what we call a ‘treasure hunt’, where they go and dive at known sites of shipwrecks to look for valuables…and on August 9 at around 11pm the boat suddenly opened up at the front….but he could not explain what had really happened if the boat had hit something or what…and said that the boat started to take in water and started to sink within 5 minutes,” said Valmont.

“They said that they had to get onto their life raft where they stayed all this time they were out at sea…they managed to survive eating raw meat [of birds], they fished and survived mainly by drinking rain water, which they captured through their life raft.”

According to an article published by Reunion Island’s news site Reunion 1ère, on Thursday the three men whom they said were Seychellois fishermen had been rescued on Wednesday evening.

In an interview with SNA, Franche-Terre's Lieutenant Jimmy Payet a national of Reunion island, explained that it was a Madagascan crew member who had spotted the men from afar.

“We first thought that it was a shipwreck but as we moved closer we saw that it was a life raft and getting closer we could see that there were people in there,” said Payet.

“We called upon the military officers on board to see if they were not pirates and from there we rescued them…they were in shock but in good health.”

According to Payet, the three men were rescued near the coast of Somalia about 440 thousand nautical miles from the location where they had indicated their boat was shipwrecked some 25 days before

Franche-Terre is one of Sapmer’s fleet of purse seiners licensed to fish in the Seychelles exclusive economic zone. Sapmer decided to use Port Victoria as the home port for its purse seiners.

Payet explained that the purse seiner with its crew of 40 including 5 French military officers, had left the Seychelles Port of Victoria to go out fishing on August 25 and was still fishing when it came across the three Seychellois men on September 2, and now that the men are back home safe and sound they are expected to resume their fishing trip later today.

Two months ago, four Seychellois fishermen were brought back to the main Seychelles island of Mahé, after being lost at sea for almost 20 days while out on a fishing trip.

The Seychelles, an archipelago of 115 islands in the Indian Ocean, entered the southeast monsoon season in the beginning of June, which often results in high winds and rough seas, and this is likely to continue until October.

At least two other groups of Seychellois fishermen are still missing.

They are Haifa Junior, which departed Mahé on Saturday June 6 this year with a crew of two people and ‘Rouze’, a fishing boat with two people on board, Francois Meriton and Don Hoareau was reported missing in June last year.