Fans rally behind the 'Walias': 400 Ethiopian football supporters in Seychelles for CAN 2017 qualifiers 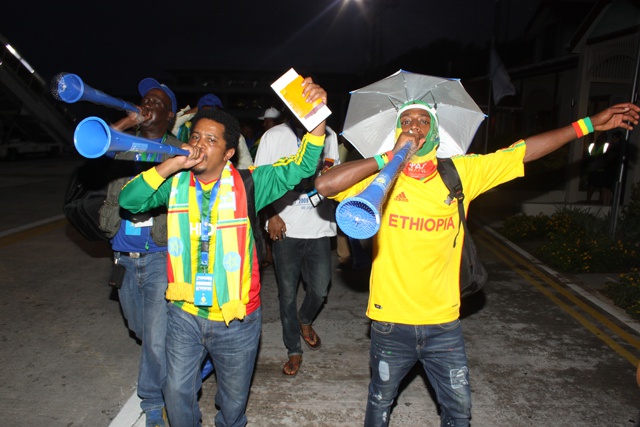 (Seychelles News Agency) - Seychelles will be facing Ethiopia on home turf this Saturday in its second qualifying match for the 2017 African Cup of Nations (CAN 2017). However, the test for the Indian ocean archipelago’s national football team will not be only against 11 players on the field, as the Ethiopian side will be backed by what can be described as the largest group of foreign supporters making their way to the island nation.

A total of 400 fans of the ‘Walias’ as the Ethiopian national side is best known, after the endangered Walia Ibex found in Ethiopia, will be heading to ‘Stad Linite’, the main stadium at Roche Caiman on the outskirts of the Seychelles capital for the match scheduled to start at 4.30pm local time.

Half of the supporters disembarked at the Seychelles International airport yesterday afternoon, after 5pm onboard a scheduled Ethiopian Dreamliner flight to the island nation.

The other half arrived onboard a chartered Ethiopian Dreamliner at around 6.15 pm yesterday.

“I love my national team that’s why I have come to support them,” one of the supporters Tewodros Saleshi told SNA at the airport.

“We hope to win…we will score more than 5 goals,” said another Mengistu Shamebo.

While those onboard the scheduled flight had capitalized on promotional fares advertised by their national airline the passengers of the chartered flight are winners of a competition organised by the Dutch brewing company, Heineken, which inaugurated its biggest brewery in Ethiopia in January this year.

According to an article published in August by Ethiopian website, Ethiosports, Heineken inserted marked labels in the cork of its new Walia beer allowing fans who find them the opportunity to fly on an all-expense paid trip Seychelles and support the Walias.

Hana Fetwi and Hewan Tesfaye are two of those lucky fans, who told SNA that they have been to South Africa, Nigeria, Algeria, Congo and even Brazil to support their national team.

“Most of the time we would pay for tickets, for everything but this time it’s Walia that sponsored us. I hope we win,” they both told SNA.

Arrangements were made before hand to accommodate the largest group of football fans coming to the island nation as their team plays the Seychelles side as they have been booked in several hotels mainly along the northern coast of Mahé.

“Ethiopian Airlines arranges for charter flights to fans from different countries when requested. We have previously arranged such charters for the Ugandan, Nigerian, Burkina Faso, Ghanaian and Qatari fans to different tournaments,” Meseret Tekalign, the Ethiopian Airline Base Manager in Seychelles, explained to SNA in an email interview.

The 400 Ethiopians will only be spending two days in Seychelles, as they go back on Sunday but this is also being viewed as an opportunity to promote the island nation as a tourist destination.

“They [the fans] will have the chance to experience the hospitality of Seychelles. [The] flights serve as a very good opportunity to create awareness and publicity of Seychelles as a tourist destination for travelers in Ethiopia and the world. This will create personal experience for many Ethiopians,” said Tekalign.

This view is equally shared by the Seychelles Minister for Tourism and Culture Alain St Ange who was at the airport to welcome the fans who arrived onboard the chartered flight.

“When they land at the airport its sports tourism, on the field it will be purely sports….To see 400 Ethiopians land in Seychelles at the same time on two different planes is remarkable for Seychelles that has been able to attract a sports team playing an international game that has attracted 400 fans to Seychelles,” said St Ange.

“These people are coming to spend their money and having fun…the football match is in the afternoon but these people will be going to the beach, to a bar and will be in Victoria enjoying themselves and Seychelles will surely reap benefits out of this.”

Going back to the CAN 2017 qualifiers, Seychelles has been drawn in Group J alongside Algeria, Ethiopia and Lesotho. The encounter against Ethiopia will be another tough test for the island nation boys after they lost their first qualifying match 4-0 against Algeria in June.

Seychelles’ performance in several international competitions this year have not proven quite successful and the national team also relinquished its Indian Ocean title at the recent Indian ocean Island Games held in Reunion island last month.

For this Saturday’s match the Seychelles side will be under the guidance and coaching of Bruno Saindini of Madagascan origin but residing and playing football in Seychelles for many years. As the caretaker coach appointed to see the team through this match only, Saindini will be assisted by Seychellois Rodney Choisy.

In an interview with SNA earlier this week Choisy said that the 20 man team playing for Seychelles today comprises of 7 new players called to the squad.

“We were focusing on the tactics in the last days leading up to the game…the players are in good spirit and are looking forward to a good match,” said Choisy.

In an interview with daily newspaper Seychelles Nation published this Saturday, Saindini described the game as a big test although he said the team was ready for the challenge.

Playing home in their first CAN 2017 qualifying match against Lesotho in June this year, Ethiopia’s Walias, came out victorious winning the match 2 – 1.

After today Seychelles will have another 4 group matches to play.

52 of the 54 member countries of the Confederation of African Football (CAF) have been divided into 13 different group for the CAN 2017 qualifiers.

The teams that will qualify for the next African Cup of Nations which will be played in Gabon between the months of January and February 2017 will include the winners of each of the 13 groups.

The two best-placed runners-up in each group will also book a place at the tournament except the group which contains the host country, Gabon, whose matches will be considered friendlies and where only the winner will qualify.

The African Cup of Nations is held every two years. The defending champion is Cote D’Ivoire that won the competition in Equatorial Guinea in February this year.