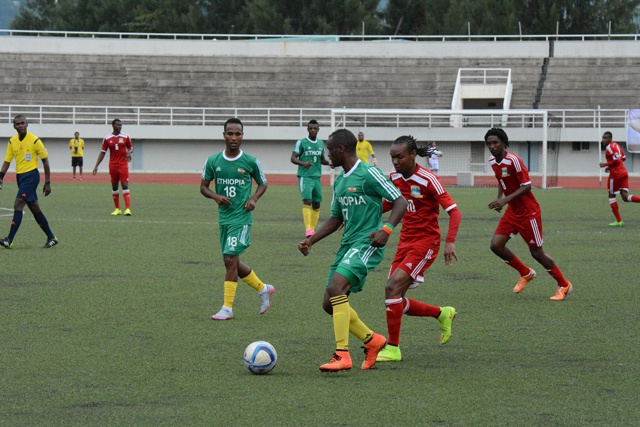 Seychelles and Ethiopia were each awarded one point following their 1-1 draw in the CAN 2017 qualifying match on Saturday. (Patrick Joubert, Seychelles News Agency)

(Seychelles News Agency) - Currently placed 192nd worldwide and 50th in Africa on the world’s football governing body, FIFA’s ranking table and having lost its first qualifying match 4-0 against Algeria in June, Seychelles was surely not the favourite going into its second 2017 African Cup of Nations (CAN 2017) qualifiers against Ethiopia, on Saturday.

Nevertheless, the Indian Ocean island team managed to hold Ethiopia, ranked 103rd worldwide and 29th in Africa to a 1-1 draw at the end of 90 minutes of play, picking up its first point at the end of two games played in the competition.

This was in spite of suffering a significant setback early in the second half to finish the game with ten men, after midfield player Trevor Vidot was given his marching orders after being shown a second yellow card in the match.

The home team took the lead through a penalty kick, halfway through the first half when Seychelles played some of its best football in recent times, placing the visitors under intense pressure in the first 45 minutes.

The shot was taken by Nelson Laurence, who plays for St Michel, a team based at Anse Aux Pins on the eastern coast of mainland Mahé.

Although Seychelles maintained the 1 goal lead in the first half, the encounter can be viewed as a missed opportunity for the team to record a first win in formal competition in over four years, as the players produced no less than three clear-cut opportunities to take the lead in the first 45 minutes.

Two of those chances were given to one of the seven new players added to the squad for the Saturday’s game, Bertrand Lablache, who plays for Lightstars based on the archipelago’s second most populated island of Praslin, but due to a lack of composure his shots ended up well over the bar.

The game was one which left supporters of both sides on the edge of their seats for the duration of the match.

400 Ethiopian supporters arrived in Seychelles on Friday for yesterday’s match and the Seychelles fans had also responded to calls to come down and support the island nation’s national team.

The 'Walias' as the Ethiopian side is best known scored the equalizing goal 20 minutes ahead of full-time, with the team making good use of their numerical advantage and becoming a bit more dominating in the second half, after Seychelles' Vidot was shown the red card.

The Seychelles goalkeeper Kitson Cecile had to be at his best to keep the visitors at bay, and he was called on to produce at least three top drawer saves in the final moments to stop his team from going down.

Finally the two teams had to accept one point each with the game ending on a 1-1 draw.

The Ethiopian coach Yohanes Sahle was more than upset that his players were not able to grab the all important goal and even criticized their opponents of “playing exclusively defensive.”

The caretaker coach of the Seychelles national team Bruno Saindini on the other hand said he was satisfied with the draw.

Saindini who is of Madagascan origin but residing and playing football in Seychelles for many years was full of praise for his players, noting that “they had done well against good opposition.”

Responding to SNA about how he got the players to play with such confidence with him being on the job of coaching the team for only a week ahead of the game, Saindini said it was matter of stimulating self-belief and getting them to play as a group.

The draw against Ethiopia places Seychelles third in the Group J standing on one point, while Ethiopia occupies first place on four points.

Should Algeria beat Lesotho in its match on Sunday, it will move to the top spot with maximum points after two games.

Seychelles' next match in its bid to attempt qualifying the CAN 2017 competition will be in March next year when it will match up with Lesotho.

52 of the 54 member countries of the Confederation of African Football (CAF) have been divided into 13 different group for the CAN 2017 qualifiers.

The teams that will qualify for the next African Cup of Nations which will be played in Gabon between the months of January and February 2017 will include the winners of each of the 13 groups.

The two best-placed runners-up in each group will also book a place at the tournament except the group which contains the host country, Gabon, whose matches will be considered friendlies and where only the winner will qualify.

The African Cup of Nations is held every two years. The defending champion is Cote D’Ivoire that won the competition in Equatorial Guinea in February this year.

Sport » Be a reporter: Write and send your article » Subscribe for news alert
Tags: football, CAN 2017, Ethiopia