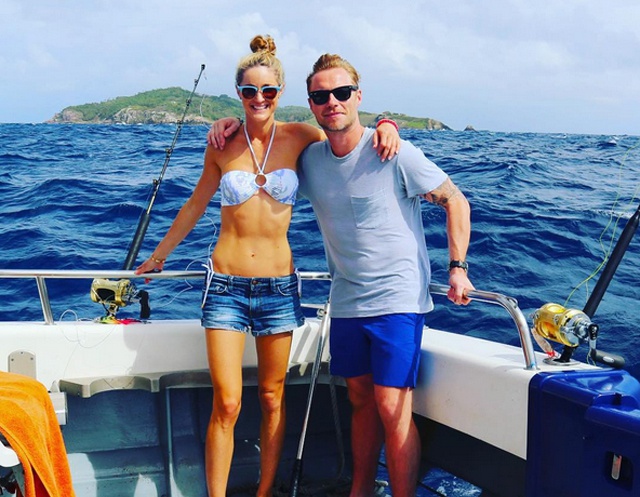 Honeymooners Ronan Keating and Australian model Storm Uechtritz, who has already proudly adopted the Keating surname on her Instagram account, caught eleven fish on their fishing trip while staying on the Seychelles private island resort of Fregate. (Ronan Keating/Instagram)

(Seychelles News Agency) - Of all the romantic activities one could imagine getting up to in a destination like the Seychelles, deep sea fishing would probably not make the top of most people’s list – that is, unless you were Irish crooner Ronan Keating and his new wife, Storm Uechtritz.

Most newlyweds would prefer sipping a glass of champagne at sunset, soaking up the sun on a tropical beach or having a romantic dinner by candlelight, but it seems the former Boyzone singer and his Australian love were far more excited at the prospect of getting their hooks in the water.

Ronan and Storm, who tied the knot in Scotland on August 17, first jetted off to South Africa to spend some time on safari at the exclusive Ulusaba lodge owned by Sir Richard Branson in the Sabi Sand private game reserve.

The couple then rounded off their walk on the wild side with a getaway to the private resort island of Fregate, located in the 115-island Seychelles archipelago off the eastern coast of Africa.

The loved-up newlyweds posted a number of Instagram snaps of their honeymoon adventures on their respective profiles.

Keating, who found fame in the 90s with Irish boy-band Boyzone and went on to enjoy a successful career as a solo artist, including the hit song “When You Say Nothing At All”, made tabloid headlines in 2010 when he separated from his wife of 12 years, Yvonne Connolly, after allegations of an affair with a Boyzone backing dancer surfaced.

Keating’s divorce was finalised in March this year, after which he announced his engagement to Australian model and television producer Storm Uechtritz. Keating’s three children with his ex-wife were present at the wedding ceremony, along with a slew of celebrities such as his fellow X-Factor Australia judge Dannii Minogue and former Westlife star Brian McFadden.

The Seychelles has long been famed as a romantic honeymoon hotspot, particularly since it was revealed that Prince William, Duke of Cambridge, and Catherine, Duchess of Cambridge, known as ‘Kate’ in less formal references, honeymooned on the private resort of North Island after their wedding in 2011.

Located 55 kilometres east of the main island of Mahé, Fregate is the easternmost island of the archipelago’s inner granitic islands. The island is home to endangered endemic species of birds such as the Seychelles Magpie Robin and the Seychelles warbler, which were translocated to Fregate as part of a conservation programme. Fregate also has 2,200 free-roaming Aldabra giant tortoises, which are endemic to the Seychelles.

Aside from the island’s eco-tourism drawcard, it is the tranquility and privacy which makes private resort islands such as these attractive to celebrities and the super-rich.

Besides relaxing by their villa’s infinity pool, having romantic dinners on the beach and having their every whim catered to, the couple wanted to get out on the ocean and experience the excitement of deep sea fishing.

“Making the most of our last hours in paradise with some deep sea fishing. Such a tomboy I know... but I've always loved fishing #GrowingUpWithBrothers #CountryGirl #CaughtElevenFish #FunTimes with my baba @rokeating #Honeymoon #MrAndMrsKeating #Seychelles #FregateIslandPrivate,” Storm wrote on Instagram.

“It's a self-sufficient & sustainable island that harvest all their own food. The fish we caught helped feed not only guests staying on the island, but also the staff too. Have a read up on the island and you'll understand just how respectful it is to the wildlife and environment,” wrote Storm in response to a fan’s comment.

Ronan shared an Instagram photo of himself and Storm in an Etihad Airways luxury “apartment” cabin snuggled up together in front of a delicious-looking dinner on their way back home, looking tired but happy.

The couple arrived back at their London home over the weekend.