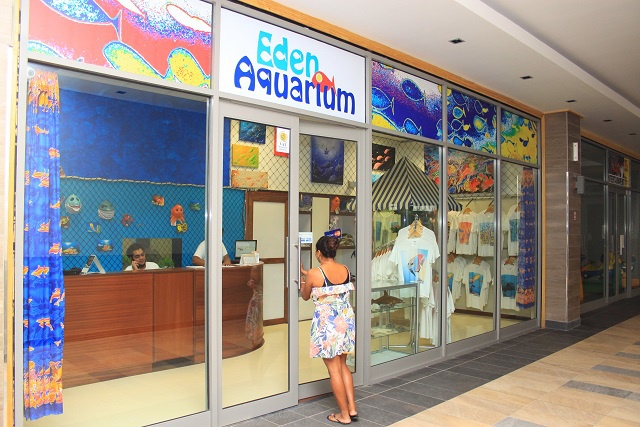 A fun place for kids to come - the new Eden Aquarium represents another attraction that can be enjoyed by the whole family (Joe Laurence, Seychelles News Agency)

(Seychelles News Agency) - A new aquarium in the Seychelles archipelago of 115 islands offers tourists and locals alike the opportunity to discover the amazing secrets of the underwater world without even getting their feet wet.

Eden Aquarium, which is situated in the Eden Plaza mall on the reclaimed island development of Eden Island just off the eastern coastline of the Seychelles’ main island of Mahé, opened last week, with an official launch ceremony, on Thursday.

For seasoned diver and boat charter businessman Charles Savy, who is the owner of Eden Aquarium, it is of paramount importance to educate children while they are still very young about the importance of protecting the treasures beneath the ocean waves, and it seems his establishment is in a prime position to try and accomplish that goal.

“For me, this project is about human endeavour… it was a big challenge. We didn’t realise when we started how much the challenge would be,” Savy told SNA in an interview.

On Saturday and Sunday, the first weekend that the attraction was opened to the public, parents ushered their excited children through the premises, helped along the way by Valerie MacGaw and Henry Diaz, two friendly and knowledgeable guides who were always on hand to help the visitors discover every gem hidden within the aquarium’s 33 tanks.

The tanks display rare and brightly-coloured marine fish taken from the natural reef surroundings of the Seychelles archipelago of 115 islands.

The aquarium’s star attractions were a number of large Moray eels, including geometric eels, grey-spotted and one very curious and flamboyant honeycomb Moray eel, proudly displaying his leopard-like markings.

But perhaps king of the hill was the octopus, whose stern, no-nonsense attitude towards being disturbed from his slumber on the walls of his tank was reminiscent of Captain Davy Jones from the Pirates of the Caribbean.

Another distinctive feature of the aquarium which makes it more similar to its large overseas counterparts was the tanks dedicated to particular types of marine environments – there was a tank displaying the distinctively round rocks with corals perched on top of them from the reefs around Ile aux Recifs (Recif Island) and another two featuring some rare fish and corals from Fregate Island and Bird Island.

Another notable display was the coastal mangrove wetland, a tank with a functioning mangrove system in the water, which was populated by some species typically inhabiting such environments, such as the common mullet and the wolffish, which Valerie explained can actually bury itself into the mud during times of drought and survive by breathing through specially adapted bronchial tubes on the top of its head for up to 30 days.

The staff members continually spray the leaves and branches of the mangrove trees with fresh water to keep them moist and simulate their natural environment as much as possible.

The team is waiting for the weather conditions at sea to improve before going out on more fish-finding expeditions.

“We have some space available, we are planning to fill up the tanks as well, and when the north-east monsoon begins we will be able to go back to the outer islands and get more fish,” said Valerie.

Savy has a deep and personal connection with the sea, having spent the past 19 years diving and running his boat charter business, and unlike most other aquarium owners, who buy their stock from breeders in Europe, he believes in sustainably sourcing his fish from the wild, and has even successfully rehabilitated fish back into the ocean after keeping them in captivity.

“Most of the international aquariums all buy their fish from the same places, bred in Holland. It’s true that to display animals in captivity is not a very easy thing… it takes time for them to adapt, some of them never adapt. Most of the large breeders will rear the fish from the time they are very small so that they are successful for display.

Savy added that as time goes on, the opportunity will present itself to catch more juvenile fish from the wild, which will then be grown in the aquarium environment to minimise the shock of capturing and translocating adult fish.

“I’m not going to say that we are completely 100 percent clean… sometimes we try and catch a fish and we end up with the wrong fish or we end up inadvertently with a little bit of damage. There is a cost in what we are trying to do,” he acknowledged.

“I think – and I would like to suggest this to the Ministry of Environment - that anyone trying to capture marine fish from the wild and keep them in a tank, I think they should have a permit in the same way that we have to have a permit. We are not allowed to sell these fish,” he added.

With degrees in mechanical engineering and applied mechanics, Savy was the right man for the job when it came to building the array of display tanks and the machinery that runs them behind the scenes. In fact, the machinery is so extensive that it is housed in the walls and all the tanks are connected to a downstairs level where the purpose-built pumps and filtration systems are housed.

“Downstairs we have a pumping system… the water pumps downstairs and back upstairs continually, 24 hours a day,” he told SNA.

Savy even had to make some careful calculations regarding the maximum floor loading for his section of the mall due to the extra weight of the water, glass and additional machinery.

A hit with visitors, big and small

After passing through the aquarium section, visitors exit through a door which brings them back to the main reception, also the site of the gift shop, which exhibits plenty of sea-themed treasures for young and old, including plush toys for children and t-shirts with beautiful marine art designed by both Savy and another staff member, accomplished artist Evelyn Fanchette, who is well-known in Seychelles for her paintings of fish.

Both Valerie and her brother Henry are great with kids, and have a fantastic way of educating them and challenging their pre-conceived ideas about the wonders of the marine world.

“Yesterday we had a little boy, maybe about 8, and you know what this little boy told me? He doesn’t like to go to the ocean because it’s like a massive toilet… I said but why? He said the fish pee in there! So I said come on, look at it – if you get cut, what do you do? You put salt or salt water on it, which is antiseptic. So that means the ocean is antiseptic… he said ‘oh! I didn’t look at it that way’,” she laughed.

A patron named Erica told SNA that her nephew, 5-year-old Sam, was ‘ecstatic’ to see the aquarium.

“He seems pretty excited. It’s nice to have something to bring children to,” she said. “There used to be one, I believe, years and years ago that closed down, I can remember being here when I was about 16… but it only had a few tanks and then it disappeared by the next time I came back. I think it’s good, it just gives children an appreciation of the ocean… most kids don’t have access to boats.”

Changing a mindset to encourage education

For the moment, the only tickets available are annual tickets, which sell at 230 Seychellois rupees, or around $18. The reason this was so was because Savy wishes parents to bring their children on a regular basis to develop a better understanding of marine life.

“I think it’s a question of getting people adapted to number one the way that we are selling the ticket,” he told SNA. “People are used to coming in and buying a ticket, but because of the importance of the educational aspect, we don’t want people coming in once and thinking they’ve ‘seen it’… people need to come many, many times. So then for people to get value for money, when they come often they will get really good value for money – it becomes the cheapest thing to do in Seychelles!”

“We will do special exhibits from time to time… for instance for one month we might do an exhibit on a certain aspect of a marine environment, and look at different things.”

Savy is already working with the relevant authorities to register as a beneficiary for Corporate Social Responsibility (CSR) tax in order to run school education programmes to educate the children of Seychelles.

“Of course if we are going to bring groups of schoolchildren in we will have to close our doors to the public for that period of time, but it’s important to educate all Seychellois,” he told SNA.

“We are not going to change the habits of [the older Seychellois] too easily, but if anyone is going to change their habits it will be their kids, as long as we can get the kids educated early – if we start too late, they have already got the habits of the parents,” he explained. “We’ve got to get these kids in here early, about 5, 6 or 7 years old, and then they are going to put the pressure on their parents and they are going to develop this passion that I got when I was that age.”