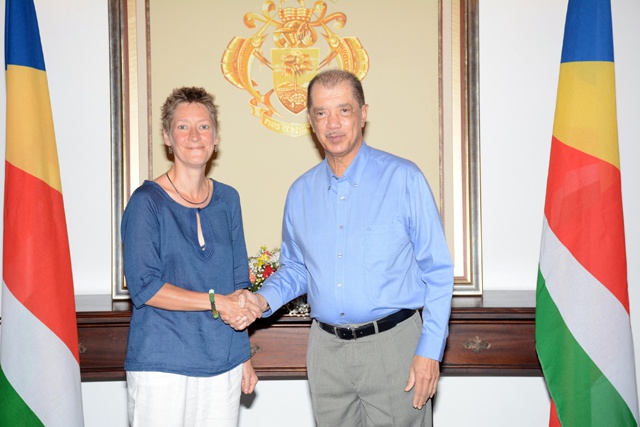 Rӧhsler said this in an interview with the local press at State House, in the Seychelles capital of Victoria, this morning.

This was after the diplomat, who has been in the island nation for the past two weeks already, presented her credentials to the Seychelles President James Michel.

While piracy and maritime security was among issues Rӧhsler said she discussed with Michel, including the need to move from prevention to tackling the root causes of piracy; opportunities for the two countries to collaborate in new areas including the blue economy concept Seychelles is promoting was also highlighted.

“I think it is a really interesting new area. It is one the UK is working closely with the Seychelles government,” she said.

“I hope that over the course of my time here, we will see perhaps a shift in focus from working on security issues together, which remains very important, to greater ties to ensure prosperity and to see more British businesses investing here in Seychelles.”

According to a press statement issued this afternoon by State House, apart from maritime security and the blue economy the Seychellois Head of State and the British High Commissioner also discussed other fields of cooperation namely education, capacity-building, environmental conservation and climate change.

On the issue of climate change, Seychelles' leadership role as a small island nation in the fight against the global concern and the upcoming UN climate change conference in Paris in December was also touched on.

Rohsler replaces the former British High Commissioner Lindsay Skoll who left in August at the end of her mandate.

The new British High commissioner to Seychelles, will be based in the Indian Ocean archipelago for the next three years.

Seychelles officially gained its independence from being a British colony in 1976.