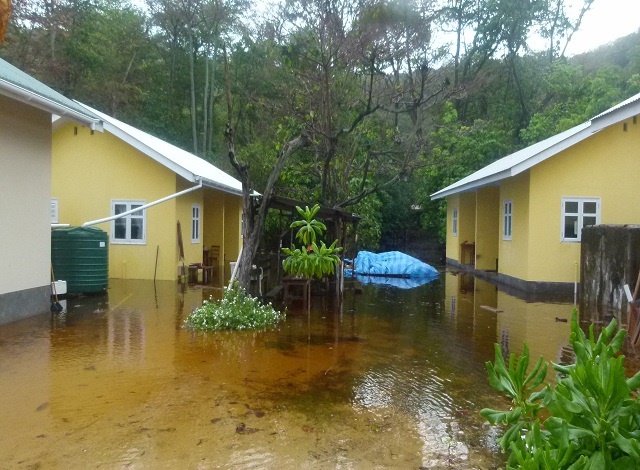 It took days before the rain and accumulated water receded on Aride as the nature reserve recorded it's highest amount of rainfall in years. Stranded in their houses and on their island, the rangers and volunteers living permanently on the island relied on their storage of food and supplies waiting for the rain to stop. (ICS)

(Seychelles News Agency) - Three times a week, a bright orange dinghy comes to Praslin, the second most populated island of the Seychelles, bringing rangers and conservation officers from Aride island located thirty minutes away by boat.

The northernmost granitic island of the Seychelles archipelago of 115 granitic and coral islands, located just ten kilometres north of Praslin is entirely protected as a nature reserve, hence inhabited by only a handful of conservation officers.

But for the past two weeks, the unmistakable dinghy was not seen accosted at Grand Anse, one of the two districts on Praslin where the rangers and volunteers are often seen buying food and other provisions.

According to Melinda Curran, the Assistant Conservation Officer working for the Island Conservation Society of Seychelles (ICS), which manages Aride, the eight inhabitants in total were unable to leave the island as the sea was too rough.

It is quite common for the only disembarkation area located on the island to be eroded during the South East monsoon season, which lasts from May to around October, often resulting in high winds and rough seas.

However, what the rangers were not expecting was the storm that brewed up the last week of August, leaving them stranded on the island for days.

“The sand on the beach has shifted from east to west…,” Curran explained to SNA in an e-mail interview adding that their only way out from the island between the reefs was too “rocky and dangerous to launch the boat.”

Prior to the stormy weather, Aride had been closed to visitors for several days as the sea was already a bit too rough accompanied by strong winds that can test any seafarer’s ability especially in the shallow channel to land on the island.

“The island was already flooded by Friday [August 28] morning and the ground saturated, but the extra heavy rain on Sunday made the plateau practically underwater with large rivers coming down the hills for several days.”

At the mercy of the rising waters, the eight rangers and volunteers living on the island watched helplessly as the rain continued to pound on their small adjoining houses during the first few days of September.

Aride is one of the granitic islands of Seychelles made up of only 68 hectares of rocks and land. With limited plateau, the village of two blocks of four houses facing each other has been built on the low-lying area overlooking the disembarkation area, in order to facilitate the collection of water from a well.

Unfortunately, during heavy rainfall, the co-habitation does not work so well for the small team as the marshes and well overflows the plateau.

“We have a system to let the water out, which is by digging a large trench to the sea running from the marsh, once this was done the water rushed out like a river which eased the situation,” explained Curran.

“It took most of the next week until the paths were clear of water but the small marsh area is still a large lake, and the paths very full of debris which floated away and several fallen trees which will all take some time to clean up.”

However, the heavy rains and flooding also caused some damages to infrastructures in the nature reserve.

“A small bridge and the top of the well floated away and the water pump were underwater which ironically meant we couldn’t pump water to the tank which feeds our taps giving us a water shortage.”

Lying in wait for the stormy condition to pass, the human population however learnt to cope on limited food and running water although electricity was not an issue.

In its quest to be self-sustainable when it comes to energy production and consumption, recently the island opted for photovoltaic panels in order to harvest solar energy.

The system which has a back-up system for rainy days has helped to outline the island’s status as an important conservation site in the Indian Ocean and amongst the granitic islands of Seychelles.

Aride Island is considered as the fortress of seabirds in the Indian Ocean – it is estimated that millions of seabirds breed on the 68-hectare island and its colonies of lesser noddies, roseate terns and tropical shearwaters are the largest in the world.

Sadly, the island’s dense population of the various seabirds including sooty terns, which has only recently went there to breed, also felt some of the effects of recent adverse weather conditions.

“A lot of birds nest were on the ground namely the White Tailed Tropicbirds, Shearwaters and Brown noddy and the flooded plateau caused several fatalities…” says Curran, adding that other species such as the hermit crabs and lizards were seen desperately clinging to trees during the storm.

Renowned for having one of the most beautiful endemic flower of the Seychelles, the Wright’s Gardenia, which is a small plant with white speckled flowers, it is uncertain how the endemic species have been affected by the flooding as the plants tends to concentrate on the plateau as well.

Interestingly it’s not been all bad as the heavy rainfall means the island’s drinking water, which is collected by means of rain water harvesting from the gutters of the houses to holding tanks, has been replenish and will last for several months.

According to the Seychelles Meteorological Office the rain experienced by Aride as well as the other inner islands of the archipelago particularly the main island of mahe and those situated in the north is not normal.

Aride is among the places that have recorded above 500 millimetres of rain in August, which is normally the peak dry month during the dry season in Seychelles, which lasts from May to October.

“In general the amount of rainfall recorded in August has more than tripled compared to what we normally have,” the Director of the Meteorological Services in Seychelles, Vincent Amelie told SNA in an interview.

“Normally we have an average 114 millimetres of rain but almost everywhere we recorded rainfall it’s been above 300 millimetres and in some places we even recorded 500 millimetres with the most rain recorded at Mont Plaisir on Praslin, 572 millimetres.”

According to Amelie Seychelles is currently experiencing the El Niño weather phenomenon, which he says latest information indicate is manifesting its presence in the Indian Ocean region.

El Niño is a periodic shift of the ocean’s atmospheric conditions in the tropical Pacific that has an impact on weather patterns all over the world. As the sea temperature gets warmer in the Pacific, the connection between the sea and atmosphere, this affects the wind circulation giving rise to more active clouds which leads to rainfall.

For the remaining months the Seychelles Meteorological office is predicting the wet condition with the rain becoming more intense on some days will persist until December before the El Niño will start to fade away.

The Seychelles archipelago of 115 islands, situated in the western Indian Ocean off the eastern coastline of Africa, experienced a mass coral bleaching event in 1998 brought about by the El Niño phenomenon. Several studies and assessment of the Seychelles Ocean have revealed that the island nation's corals are healthy and recovering.

Referring to the current situation Amelie explained to SNA that there would have to be monitoring by experts in the field to see if the sea temperature is worrying enough to fear coral bleaching.

“El Niño peaks around November to December, so if there will be any chance of coral bleaching it will happen when we are reaching the end of the year as this takes longer to happen.”