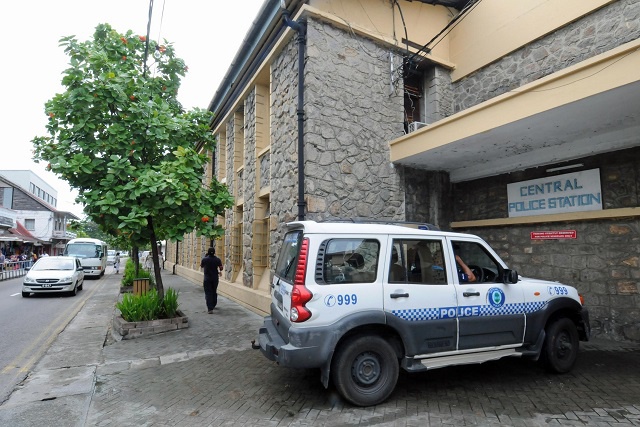 A view of the Central police station in the Seychelles capital of Victoria. The police has made three arrests in recent weeks related to fraudulent activities targeting ATM cards. (Patrick Joubert, Seychelles News Agency)

(Seychelles News Agency) - The Seychelles police and other law enforcement authorities are on high alert and remain vigilant to detect fraudulent activities following the arrest of a third group of foreign nationals.

Two men with US passports, one of whom also holds a Greek passport according to the police, were arrested on Monday and are being investigated after they were found to be in possession of what the police suspect to be counterfeit ATM cards.

In a press conference this morning, the police spokesperson Jean Toussaint said the two men are brothers aged 39 and 46.

One of the two men had arrived in the Indian Ocean archipelago on Thursday, September 3 and was meeting his brother at the airport on Monday this week, when they were arrested by the police.

“The Immigration [officials] picked up on certain things with regards to the one coming in at the airport and following investigation by the police who had been called in to intervene, the sum of $10,000 was also found in the boot of the car that was being used by the other [brother] who was already in the country, which had not been declared when passing through immigration.  This leads to believe that there is something suspicious going on,” said Toussaint.

“They also had some tools that can be used to possibly temper with ATM machines.”

The two US nationals appeared before the Courts yesterday and have been remanded in police custody for 14 days while the investigation is ongoing.

The incident comes only a week after two Russian nationals and three weeks after three Bulgarians were arrested as suspects involved in similar fraudulent activities. Both groups are being remanded after their appearance before the courts.

According to Toussaint, the two female and one male suspects carrying Bulgarian passports are due to appear before the courts once again tomorrow when they are expected to be charged while the two Russians, whom he says has been confirmed to have been in possession of some 67 counterfeit cards will eventually be charged as well.

Authorities on high alert and collaboration to detect fraudulent activities

“What the investigation is showing is that the groups of people are part of larger syndicates engaged in criminal activities worldwide…we saw with the three Bulgarians [for example] they have travelled several countries on several continents during a period of time,” he added.

The Seychelles police has indicated that there is a joint collaboration between the various law enforcement authorities and other agencies like the Immigration, Seychelles bankers association, the National Drugs Enforcement Agency, NDEA, which has led to the detection and arrests of the three groups of individuals. The collaboration is also involving international partners including Interpol.

“It’s possible that there is a perception that Seychelles is lagging behind, is not on its guard so it is vulnerable, it’s a small country with no expertise and the right competencies…but it’s clear the perception is wrong...with three different cases reported on so far, for more individuals to risk coming here…the police and other agencies are not sitting back instead the effort is being intensified,” said Toussaint.

“Seychelles’ intention together with its partners involved in law enforcement work is to send a clear message in respect to such transnational crimes…and we hope that people engaged in such criminal activities with the belief that they can come to Seychelles to do whatever they want are made aware that they need to be very wary because the authorities know what is happening and will do all that is necessary to prevent such activities from taking place in Seychelles.”

The police is also calling on members of the public to be more vigilant and to be careful when handling their personal ATM card information or when giving out personal information when it comes to business activities and to report any suspicious activities detected at any banks or ATM machines in the country.