Getting rid of your old mobile? ‘Sustainability for Seychelles’ is collecting e-waste in special bins 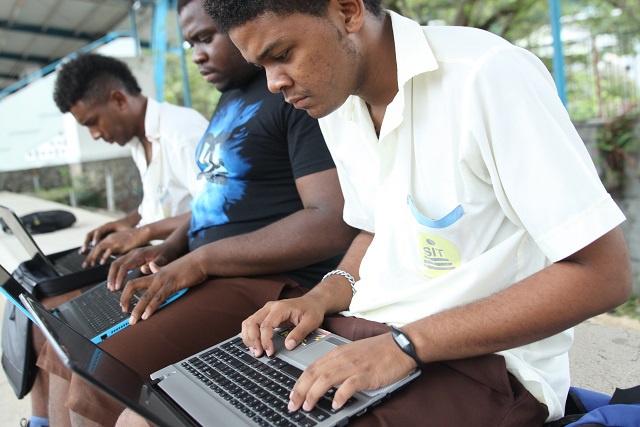 (Seychelles News Agency) - Embracing the information technology age can be considered an achievement for a small island developing state like Seychelles in the Indian Ocean, where its 90,000 population has avid users of mobile phones, laptops and PCs.

However this IT consumption also produces large amounts of waste, and as a consequence technological devices account for 6 percent of the islands’ electronic waste materials, according to a household survey on e-waste by Sustainability for Seychelles (S4S), a local non-governmental (NGO) organization which is helping to educate the islanders on the proper management and disposal of ‘e-waste.’

In an interview with SNA, the S4S executive director, Michele Martin explained that the need to start educating the local community on how to properly dispose of broken, old or unused electronic devices, especially mobile phones, was evident, after the results of the household survey on e-waste was published in 2012.

The survey was carried in 103 households by S4S members of the Seychelles Wildlife Clubs and its partners. The data collected was extrapolated with the total number of households 24,142 according to the 2010 national population census and average weights of some items.

Results show that communication devices which includes, mobile phones, landline phones, fax machine and others accounted for 6 percent of total e-waste materials with computer equipment being the most common, reaching 31 percent.

“Seychelles is becoming more and more like industrialized countries, we are producing a lot of electronic waste so we need a plan to get rid of it…a lot of these metals can be reused…however we do not expect to have industries in Seychelles for the recycling or disposing of hazardous waste…but with the implementation of the waste policy by the government in 2013, we hope to have at least a plan,” said Martin.

Until a national plan specifically targeting e-waste is implemented, S4S has taken steps to drive the e-waste collection with its own project, having partnered with telecommunication companies and others mainly in the phone industry to encourage people to handover all unused or broken mobile phones and smart devices.

Special bins have been placed at the premises of companies including phone repair shops and showrooms that have agreed to support such an initiative.

The project is part of a larger endeavor aimed at addressing waste management in Seychelles dubbed ‘Engaging Civil Society in sustainable waste management’. Electronic waste disposed of by the public will be recycled, scrapped for parts or shipped overseas for proper disposal.

“We are targeting two main groups…the consumers who generate waste and the private sector who might be able to make some money from waste in different ways…so we chose mobile phones because young or old everybody has one, and the survey showed that some people have a few old phones lying around…it is the kind of electronic waste that everybody can relate to,” explained Martin.

Some IT consumers that spoke to SNA seemed reluctant to part with their old devices.

24 year-old Catherina has in her collection two smart phones, one iPad, two laptops and other electronic devices such as cameras, external hard drives, just to name a few.

“I do not use all of these devices…I use my phones on a daily basis and I’m supposed to get the latest Samsung soon. I do not throw my devices away when they break or when I get new ones. Most of my devices are gifts from family and friends so I like to keep it at home as souvenirs,” said Catherina.

Same goes for Jude, a 24 year-old photographer and graphics designer who also has a passion for the latest gadgets. Jude says he has a collection of about 28 electronic devices lying around the house which includes desktop, laptops, tablets, his cameras,  printer and games.

“…half the devices I own are broken, some are outdated and the others are still in use. I never throw any of my devices away because it is like throwing away money…broken or old they still have value,” said Jude.

S4S will be working to convince more people to handover their old devices. The NGO was established in 2007, with a mission to promote ‘green’ living in Seychelles. It hopes that someday all electronic waste is properly managed and disposed in the country and the public also has a broad knowledge on this issue.

“Cell phones might have a higher value when exported overseas to be scrapped or recycled, so maybe local companies can make some money out of it… but to sustain the business, definitely other e-waste should be included that can fetch money,” said the S4S executive director.

Seychellois love to talk on the phone

According to 2014 statistics available from the International Telecommunications Union (ITU) there were 151,336 mobile subscribers in Seychelles, around 1.6 devices per person.

These figures indicate that Seychelles is among developing countries that have witnessed a surge in the purchase and use of modern technologies such as mobile phones especially smart phones, other smart devices such as iPad and tablets, as well as laptops, desktop computers and flat screen television.

Broader waste challenges for the islands

The load of electronic waste continues to increase in homes, and in the end accumulate on the three main dumping sites found on Mahé and Praslin, Seychelles’ main and second most populated islands.

The Seychelles’ Land Waste Management Agency (LWMA), which is responsible for the disposal of waste in the archipelago, told SNA that all municipal, commercial and other types of waste are mixed up together due to the fact that the islanders do not sort their waste in different categories.

This means biodegradables as well as non-biodegradable items such as plastics, glass as well as e-waste, which include everything that runs on electricity, batteries and other forms of energy, are dumped on the same waste sites, and this is harmful to the environment.

Approximately 70, 000 tons of waste is deposited on all three landfills in Seychelles per year.

There are a number of companies in Seychelles that collect PET bottles, metallic cans, glass products and even metals and used batteries for recycling purposes in a bid to reduce the amount the amount waste piling up on the landfills or polluting the environment.

The Seychelles government has also subsided the recycling of plastic PET bottles to get the businesses running and help reduce plastic pollution in the country.