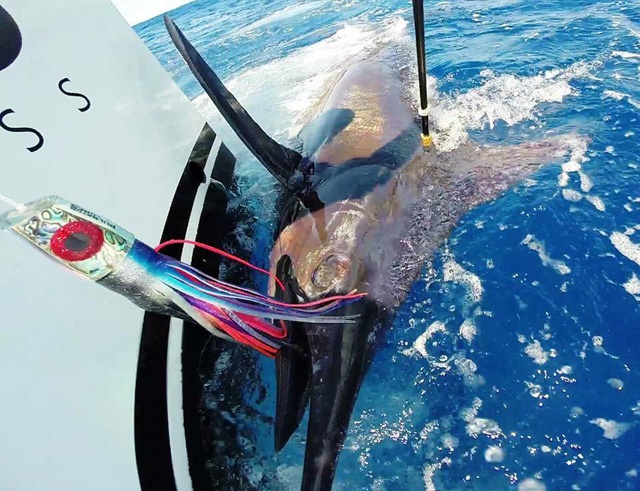 Black Marlin and a Tag going in! (A1 Fishing)

Sadly, there isn’t much data when it comes to the stock level, movement and vulnerability of the various marlin species worldwide, including in the Indian Ocean region, although in recent years, anglers in the tiny Indian Ocean archipelago of 115 islands have become more conscious of the need to contribute towards efforts to monitor the species, to ensure its conservation and sustainability.

The Seychelles Sports Fishing Club, SSFC, which organizes several competitions annually, targeting various fish species, is one organization that has been promoting the tagging and release of marlins and other billfish (such as sailfish and swordfish) and associated species over the last two years.

This has been done in collaboration with several international partners including the World Wide Fund for Nature, the Billfish Foundation, the Bisbee's Fish & Wildlife Conservation Fund and the International Game Fish Association.

SSFC has now formalized collaboration with a local partner, the Seychelles Fishing Authority, SFA, to contribute towards scientific research on billfish species in the region, after around 3 to 4 years of partnering, where SFA staff have been present during SSFC’s various competitions to collect data on various fish species as part of their stock assessment efforts.

The agreement signed last Friday between the two parties, has brought the collaboration to another level as it will cater for the implementation of a biopsy programme, where DNA samples will be taken from billfish caught in Seychelles waters before they are tagged and released to allow for research on their genetics, reproduction and breeding. Training of anglers taking part in such activities is another component of this collaboration.

“The biopsies will help us in genetic researches that we want to do, for example varieties of stock in the Indian Ocean and how they are dispersed....Training would be part of our future programmes, like for example SFA is planning to conduct training in Fish Aggregating Devices but for now our focus is on the billfish tagging project,” the Chief Executive of SFA, Vincent Lucas, told journalists on Friday.

With regards to tagging, SFA has also donated pop up satellite tags to be used specifically to gather data on marlins.

“It will allow us to obtain more information on the ecology and biology of marlin species. Based on the assessment that has been conducted by the IOTC [Indian Ocean Tuna Commission], they are vulnerable and some of them are over exploited. This information will be very useful for decision makers,” said Lucas.

“The pop up satellite tag is programmed and attached to the fish [above the lateral line below the dorsal fin]. After they are released we can start collecting data on their movement. With this tag we do not need to capture the fish again to retrieve the data..."

The way the tag works is that after approximately 240 days a bolt designed to degrade when in contact with salt water detaches and the satellite tag transmitter comes afloat and start transmitting the data via satellite.

Four such tags have already been deployed by Seychelles anglers.

“We’ve had results back from three, one popped up of the coast of Oman, another at the Somalia-Kenya border and another in the south of Mahé,” said SSFC’s Secretary Grant Heyer.

According to Heyer, the additional satellite tags received from SFA will allow Seychelles to continue participating and become a firm anchor of the IGFA Great Marlin Race in the Indian Ocean.

“It builds our stock so that we can continue to build the Seychelles notoriety in sports fishing department,

“With the SFA we are involved in trying to bring many programmes to learn more about fish in Seychelles. There are a lot of researchers around the world who want to learn more about the Indian Ocean…. The data will be later evaluated by the top billfish researchers in the world at the Stanford University [in California]. We will later get their results and final feedbacks that will also go into global data base.”

The results are expected to benefit other interested parties from scientists, conservation groups and also students in Seychelles.

“It is a great step forward for Seychelles and the rest of the world in terms of conservation and education of the movement and science of the billfish….The data that will be obtained will be shared openly with the SFA from Stanford University and with the Seychelles University in the marine fisheries management programme,” said SSFC’s Chairman Tarak Patel.

Although the hype about conserving billfish in Seychelles has intensified over the last two years or so, it’s been around 6 years since anglers in the Indian Ocean island started feeding data to the Billfish Foundation by joining the Florida based organisation’s tag and release programme.

According to SSFC while the deployment of satellite tags is important and it yields the most data, not all fish can be tagged with a satellite tag because of the cost, hence the reason anglers are also being encouraging to use standard tags on the majority of billfish tagged and released in the Indian Ocean archipelago.

Mike Mason is one of Seychelles anglers that has been practicing catch and release for the last 2 years as a sports fishing enthusiast as well as through his fishing charter company.

“I've wanted to learn different technics in catching sailfish and Marlin over the years. Traveling to various destinations such as Kenya, Cape Verde, etc... has encouraged me to practice catch and release. It was awkward to change from killing to releasing a fish but I quickly adapted to this,” Mason told SNA.

“We have to protect our stocks if we want to keep on fishing as a sport and for future generations to come. As a fishing charter company "A1 Fishing" we have been practicing for the last 18 months. I have personally caught, released and tagged over 50 fish this year. As a company more than 200 billfish.”

Recently the Indian Ocean archipelago of 115 islands with a total land area of 455 km² spread over an Exclusive Economic Zone of 1.3 million square km, recorded an all-time 300 billfish tagged and released since 2009, according to the Billfish Foundation’s record.

This year however, has seen the amount of standard tag deployed in Seychelles risen by 142 percent with almost 150 billfish tagged and released to date since December 6, last year.

According to SSFC, approximately 1 billfish is being tagged and released in Seychelles every 1.8 days adding that both sports fishing anglers and recreational anglers are getting involved in such conservation efforts.

“Our long term target is to try an overtake Australia in terms of tags deployed.  Australia leads the Indian Ocean in deployment of The Billfish Foundation tags,” concludes Heyer.