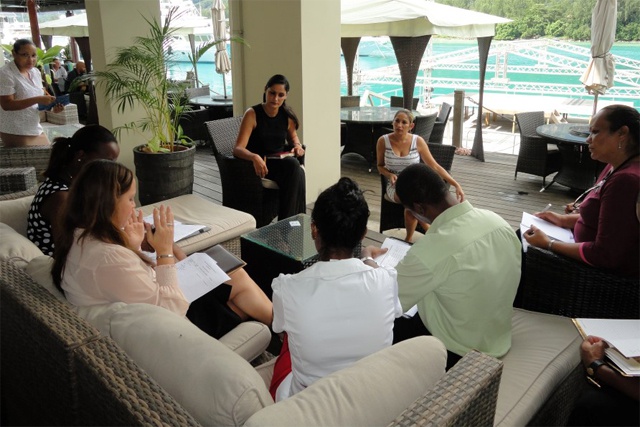 Labour and Human Resources Development Minister Idith Alexander and other officials meeting with management of the Boardwalk Bar and Grill at Eden Island Seychelles to talk about staff welfare and employment, February 28,2014 (Seychelles News Agency)

(Seychelles News Agency) - Seychelles has laid out strategies to help its citizens get more jobs with a new quota system for expatriate workers introduced, as figures show 24 percent of the country’s 55,083 labour force is made up of foreign workers.

There are 13,413 expatriates who work mainly in the Indian Ocean archipelago’s construction and tourism industries, compared to the 41,670 Seychellois in the nation’s labour force, according to statistics released to SNA by the Seychelles’ Ministry of Labour and Human Resources Development ahead of events to mark Labour Day which falls today, May 01.

The new strategies are outlined in a new policy aimed at creating decent work for all, which was launched Monday April 28 by the Seychelles Minister for Labour and Human Resources Development Idith Alexander.

Explaining the strategies, Principal Secretary in the ministry, Veronique Bresson, said the new guidelines seek to introduce a new quota system for employment of non-Seychellois, and list occupations reserved for the island nation’s citizens. Details of the system were not revealed.

“The strategies seeks to promote equal pay for work of equal value,” she said, adding that the government will consider introducing sectoral wage schemes in areas of demand through collective bargaining, and also develop a standard format for the publication of vacancies

Seychelles has a low unemployment rate which stands at 2.22 percent, representing 1,155 registered jobseekers as at March 2014, according the Seychelles ministry responsible for labour.

There were also 766 vacancies registered with private employment agencies between January and March 2014.

“About 25 percent of employees work in government jobs while the private sector employs 57 percent. The other 17.9 percent are either in the parastatal sector, private homes or unstated sectors,” said the ministry in a statement.