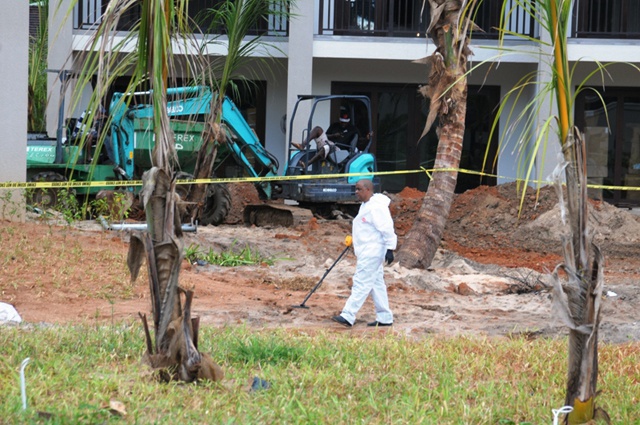 File Photo taken in May this year showing the site where the skull was discovered at Belombre in the north of the Seychelles main island of Mahe. (Seychelles Nation)

(Seychelles News Agency) - The identity of the person whose skull was discovered at a hotel construction site on the Seychelles main island of Mahe in May this year is still unknown.

The Seychelles Police issued a press statement yesterday after they received the report on the DNA testing from the Mauritius Forensic Science Laboratory, saying “nothing conclusive has come out of the test done on the skull.”

According to the statement, the Seychelles Commissioner of Police, Ernest Quatre, received a report from the laboratory which indicated that there was ‘insufficient DNA’ was obtained from the teeth sample for them to obtain a DNA profile.

“ ... analysis was done using routine processing procedures and now it is required that the samples be further processed using more specific methods in order to maximize the chance of generating a DNA profile,” reads the statement.

The laboratory has indicated that it will take another month to do the required DNA profiling tests.

The skull was found by employees of a company contracted to landscape the grounds around a hotel being built, the H Hotel at Bel Ombre, a village on the north-eastern coast of Mahe. The workers later re-buried the skull in a different location, but pictures of the original find taken by the workers surfaced through the popular social networking site Facebook , on Friday 15 May.

Three families of persons who have gone missing have already come forward to find out if the skull could be that of their family members.