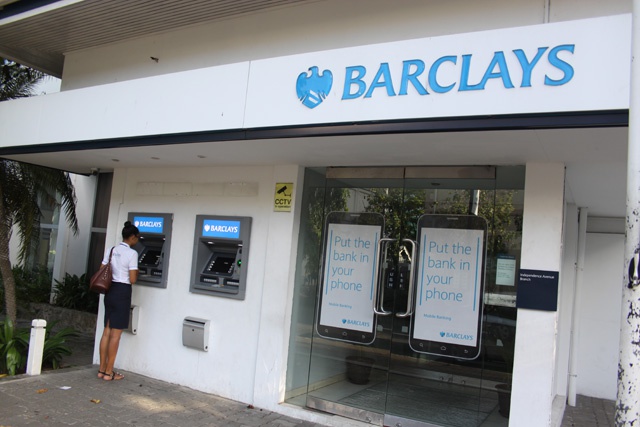 (Seychelles News Agency) - The Central Bank of Seychelles (CBS) says it is engaging with Barclays Bank Seychelles to ensure that clients have sufficient time to shift their deposits in their offshore bank accounts, following a recent decision by Barclays to discontinue its banking services for non-residents in foreign currencies.

While Barclays refused to comment on the decision to SNA, the CBS issued a press statement jointly with the Seychelles Ministry of Finance, Trade and the Blue Economy, Financial Services Authority (FSA) and Financial Intelligence Unit (FIU) on Friday last week.

“Following a remediation exercise, Barclays determined that the level of risk arising from its offshore banking activities is not in line with its risk appetite, which refers to the level of risk that the bank is prepared to take," read the statement. "However, as a result of global tightening in the regulatory environment and large fines imposed on international banks, financial institutions are increasingly restricting business relationships with high risk clients or categories of clients to avoid the risk of sanction."

The financial authorities acknowledged the difficulties faced by the clients given Barclays’ decision. According to information provided to SNA by CBS, all of Barclays’ offshore clients were informed about the decision and the date of the service closure is October 31, 2015.

“International standards for risk management in financial services identify offshore banking as a higher category of risk in view that most of the customers do not have a presence in the jurisdiction in which the bank operates which makes it more difficult to apply Know Your Customer procedures and consistent monitoring,” said the joint statement.

Closure has 'shaken the industry'

Barclays, which was the first commercial bank to set up operations in Seychelles in 1959, ventured into offshore banking in 2004, and together with the Bank of Muscat International Offshore (BMIO) were until now the main institutions providing offshore banking facilities in the Indian Ocean archipelago.

SNA contacted some companies offering services to offshore clients in Seychelles to find out how the industry is being affected with Barclays’ decision to cancel its offshore banking facilities.

One company that responded, although it preferred not to be named, said that the industry was aware of Barclays reviewing its policies although it acknowledged that the decision has indeed shaken the industry with less banking options left for clients.

The company’s representative added that many clients were however already looking for alternate solutions outside Seychelles including in the neigbouring island of Mauritius “due to various factors not only with more stringent or complex solutions coming from the available offshore banks.”

“For a country that is thriving to push its financial services sector it might be a struggle for us to offer a one stop shop solution to our clients if they don’t have any banking options in the country,” the company’s representative told SNA.

For another company the development is being viewed as one that has not helped "an already fragile sector," adding that affected customers having to find another banking option mainly outside Seychelles, would certainly mean an exit of bank deposits formerly held in the Barclays offshore banking unit to foreign banks.

"In more general terms, without having quality banking options to support the 'high value' products that the Government, regulators and Corporate Service Providers desire to move toward, it will be exceedingly difficult for the industry to move forward and beyond the current back office, wholesale IBC model which is not sustainable long term."

Too early to tell if offshore clients will jump ship, says FSA

The Seychelles Association of Offshore Practitioners and Registered Agents (SAOPRA) is of the view that with clients often preferring to have their company’s bank account in the country of incorporation “the lack of a reputable brand may cause clients to lose confidence in our jurisdiction.”

“Those clients with offshore accounts will have to make provisions to open their account with other banks, other than Barclays. As an Association, the SAOPRA has expressed concerns that existing high valued products are not being given priority. This is of paramount importance as one of the product will bring a 1.5% tax in our economy. Also these products are transparent as it has to produce annual returns with the tax authorities,” SAOPRA’s Vice Chairperson Ina Laporte told SNA in an emailed response.

It has not been possible to find out what percentage of offshore bank accounts were registered with Barclays and according to the Financial Services Authority, FSA, it is too early to predict if this will mean a flight of money away from Seychelles.

“Having offshore banking facilities in the Seychelles facilitates activities and would provide an attraction to individuals wishing to have certain structures in Seychelles. However with the inability to open such accounts clients will seek for alternatives abroad, something which was being done even BBS had been offering the service….At this juncture it will be difficult to say given Barclays formally announced its decision recently following their remediation exercise. The FSA cannot at this juncture comment on the issue of capital flight from the Seychelles owing to the business decision made by the bank to discontinue its services,” FSA told SNA.

The high risk factor of offshore banking also impacted BMIO last year. In November 2014, CBS took control of BMIO after the latter’s banking relationship with its foreign correspondent broke down. The foreign transactions became operational again in December and the bank continues to offer offshore banking services while a reorganization plan is being implemented.

Amendments to the Financial Institutions Act 2004 in December 2011, allowed for the introduction of a single licensing regime, which allows for one licence to be issued under which both domestic and banking business that gives rise to foreign sourced income may be conducted.

Seychelles has around 140,000 international business companies (IBC) in its offshore sector compared to the 650 when it started in 1996.

Concerns were raised in 2013 by the Organisation for Economic Co-operation and Development (OECD) over Seychelles jurisdiction with regards to tax transparency rules which resulted in amendments made to its 1996 International Business Companies Act to bring it in line with international standards.

According to the CBS joint statement, Seychelles has also addressed its non-compliant status through other channels, adding the country has a “commitment to the OECD’s Automatic Exchange of Information; and Seychelles entering into the Inter-Governmental Agreement for the Foreign Accounts Tax Compliance Act (FATCA).”

Seychelles authorities say they are receiving assistance from external partners such as the International Monetary Fund, US Treasury and the World Bank, in order to ‘build capacity within the financial services sector.’