Sharks on display at Seychelles’ museum 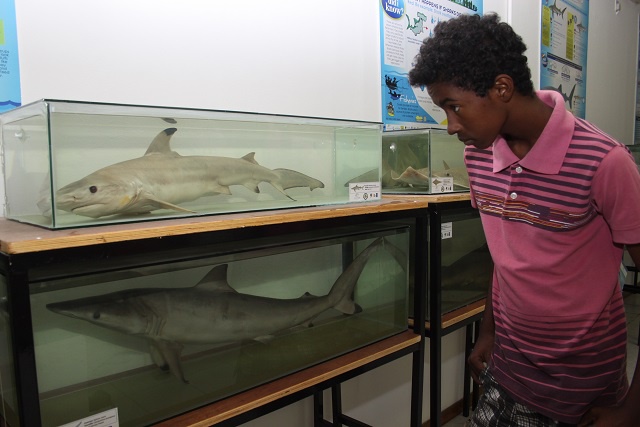 A local visitor up close with a shark on exhibit (Joe Laurence, Seychelles News Agency)

(Seychelles News Agency) - Interested in getting a close-up view of sharks? A new exhibit at the Seychelles National History Museum opening Monday is the place to be.

No reason to be afraid, though. Whether the sharks are found in a museum or in the ocean, you’re more likely to die falling out of bed than from a shark attack, one expert said Friday.

Arjan De Groene – the head of the Green Island Foundation, which is hosting the exhibit, said that sharks are the most misunderstood creature in the ocean. De Groene hopes the exhibit can help inform people about the importance of a healthy shark population.

Regions of the world that fished out all their sharks saw whole fisheries collapse afterward, De Groene said. Sharks keep the ocean ecosystem balanced, he said.

“There is no reason to be scared of sharks. They do not target people, most of them are too small to do any harm and some of them don’t even have teeth!” De Groene said. “You are more likely to die from falling out of your bed while sleeping than from being attacked by a shark.”

Twenty-one types of shark will be on display at the museum. The exhibit was to open earlier, but the opening had to be postponed while renovations were carried out.

Museum Curator Beryl Ondiek said the opening couldn’t be delayed any longer. “Even if we still have some works to do we have to open because there are too many clients asking to see the sharks,” she said.

Given the nearly endless coastlines and beaches found on the 115-island western Indian Ocean archipelago of Seychelles, one would think shark scares would be common. But they are rare.

The last fatal shark attacks in Seychelles happened in 2011, off the second-most populated island of Praslin. The attacks – which killed two tourists from Britain and France – were the first in decades.

Captain Joachim Valmont, director-general of the Seychelles Maritime Safety Administration, said in an interview Friday that moored yachts that threw fish parts into the ocean likely contributed to the 2011 attacks, which he called a one-off incident.

“Since then we have put in place measures like nets where necessary and lifeguards at Anse Lazio and other areas to ensure safety of swimmers. We also keep a close eyes on the moored yachts,” Valmont said.

Shark fishing has been practised in the Seychelles’ islands for centuries. The sharks are not only exploited for their fins, which are used for export, but also as a delicacy in the local cuisine in dishes like ‘satini reken’ (shark chutney)  and the ‘kari koko lapo latet reken’ (curry with coconut milk of the shark head flesh).

De Groene acknowledged that shark is part of the Seychellois diet. He advocated for targeting sharks that come from an abundant species. He warns against killing young ones.

“Slaughtering young sharks is borderline negligent, given that there is no record available presently to make known which shark species is dying out, or how many of a particular species exist in Seychelles waters,” said De Groene. “It could be that the population is healthy and that it is safe to exploit the sharks, but it could also be that they are in danger of extinction.”

De Groene explained that it is easy to catch small sharks in great numbers at a certain period during the year because the species frequent areas where fresh water mixes with sea water during breeding time.

Sharks can sometimes be seen at Port Launay, a coastal village on the west side of the main island of Mahe), said De Groene.

The Green Island Foundation is working with major stakeholders in the field in Seychelles to compile data about sharks.