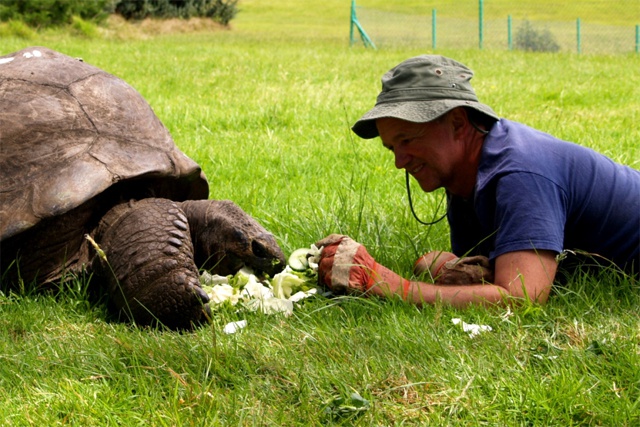 (Seychelles News Agency) - The population of Seychellois living around the world may number into the thousands, but one very unique Seychellois in the diaspora may one day be celebrating his second century. He’s not the talkative type, but one wonders what stories Jonathan the giant tortoise would tell us - if only he could - about his journey from the Seychelles islands to one of the most isolated and remote locations on earth.

Jonathan, a rare Seychelles Giant Tortoise is thought to be the oldest living animal on the planet, and at an estimated age of 182, he is taking the distinction in his stride while spending his days in the British overseas territory of St Helena accompanied by David, Emma, Frederika and Myrtle that have been identified using Dr Justin Gerlach’s tables (Seychelles Nature Protection Trust) as Aldabra Giant Tortoises.

Still active and healthy, the elderly but spry gentleman regularly cavorts with his three female companions and genially poses for photographs with guests to the governor’s residence, where he is one of the celebrated main attractions.

Jonathan has seen a total of 28 British governors come and go at Plantation House since he was brought fully-grown from the Seychelles, a small African island state in the Indian Ocean, to the mysterious island of St Helena in 1882 at the approximate age of 50, possibly as an exotic gift for then-governor Hudson Ralph Janisch (in office from 1873 to 1890).

Since its discovery by Portuguese sailors in the 1500's, the island had been strategically important as a stopping-point for ships making the perilous journey round the Cape of Good Hope to reach the Indian Ocean and South China Seas in a race for European colonisers to claim valuable spices and territories. It also later served as the ideal solitary confinement zone for political prisoners hostile to the British, most notably Napoleon Bonaparte until his death in 1821 as well as over five thousand Boer War prisoners.

When the Suez Canal was completed in 1869, St Helena once more became an isolated volcanic dot in the middle of the unforgiving South Atlantic Ocean, and her hillside fortresses, once guarding against bombardment by enemy cannon, now lie crumbling with the passage of time.

Time, however, has never been of particular concern to Jonathan, who is one of only a handful of remaining Seychelles giant tortoises on earth. His longevity seems to fit in perfectly with St Helena’s isolation and apparent timelessness. With a population of just over four thousand, St Helena is currently accessible only by sea, although a long-awaited airport is planned for opening in 2016.

According to the only full-time veterinarian on the island, Joe Hollins whose real name is actually Jonathan, tortoise Jonathan was not always in such great shape. In an interview with SNA, Hollins said that Jonathan, who is almost completely blind due to cataracts, had trouble foraging for his own food, leaving his keratin-based beak to deteriorate and grow soft.

“The result was that he was quite thin,” said Hollins, explaining that the weight of a tortoise can be assessed by feeling under the shell around the legs. “He also had trouble grazing, often grabbing dirt and leaves, but also having to pull at grass instead of cutting it. Because of this, about two years ago I started feeding him a bowl of nutritious food every Sunday in my own time.”

The results were better than Hollins could have hoped for. The additional nutrition has hardened Jonathan’s beak into a sharp-edged grass-mowing instrument, leaving Hollins with one or two injuries from hand-feeding a visually-impaired hungry tortoise. The vet continues to feed Jonathan, albeit with leather gloves now. He has also become more active and has put on weight – which means better nutritional reserve in the winter and better insulation against the cold.

Hollins says that Jonathan has exceeded the normal lifespan of giant tortoises, which is about 150 years.
“He is doing well, and we hope that he will see us all off! Realistically, he could die tomorrow, but it would be great if he soldiered on for another 30 years,” added Hollins.

When he does go to the big green paddock in the sky, the government of St Helena will be well-prepared. His send-off, dubbed “Operation Go Slow” is designed to make his legacy last longer than even he did.

“Like a celebrity, we have written his obituary for a worldwide press release,” explained Hollins. “We will preserve his shell and have a plan in place with the help of the Natural History Museum of London. They in exchange will want DNA samples. His other remains will be buried at Plantation House.”

Plans are also being put into place for a life-size bronze statue to be built in the capital city, Jamestown, to immortalise the famous giant tortoise. It is hoped that tourists will view the statue as a symbol of longevity, just as the residents hope for increased tourism from the new airport to sustain the longevity of the island’s future.

Despite Jonathan’s carnal activities lasting well into his golden years, he has never produced any progeny, most likely because his three female companions, Emma, Frederika and Myrtle, although also originating from the Seychelles archipelago, belong to the Aldabra giant tortoise genus, rendering them incompatible for mating purposes.

It is not known if any Seychellois tourists to St Helena have ever been to visit their ancient countryman, but the completion of the airport might serve as a greater encouragement to make the trip and discover first-hand the incredible link between the two island nations before Jonathan’s time runs out.