Air France plane lands in Seychelles due to medical emergency 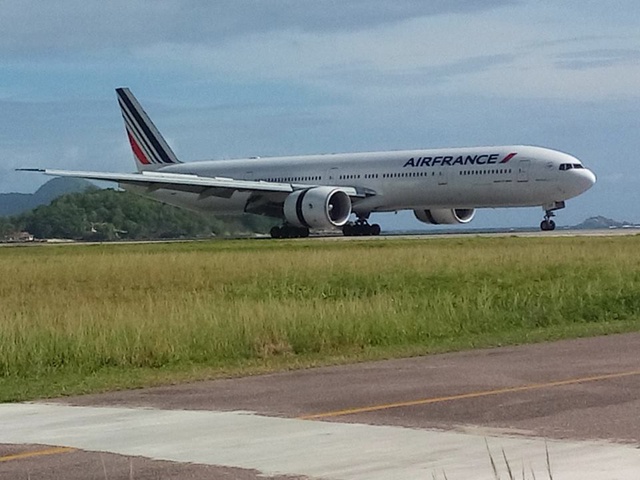 The Air France Boeing 777 pictured when landing at the Seychelles International Airport at Pointe Larue. (Facebook)

(Seychelles News Agency) - An Air France plane requested permission to land at the Seychelles International airport this morning after one of its passengers reportedly encountered a medical emergency.

The Air France plane, a Boeing 777 travelling from Paris with 491 passengers onboard, was bound for Reunion island, a French overseas department in the Indian Ocean.

“We were informed that there was a person suffering from epilepsy onboard... as soon as the Air France plane requested permission to land we contacted all the relevant local authorities," the Chief Executive Officer of the Seychelles Civil Aviation Authority (SCAA), Gilbert Faure told SNA.

SCAA confirmed that the passenger in question is a 5-year-old girl, who was subsequently transported to the Seychelles hospital for treatment after the plane landed.

According to the Seychelles Immigration services, two French nationals [a little girl accompanied by a woman] disembarked from the plane to go to the hospital.

The plane landed at the airport at Pointe Larue on the eastern coast of the main Seychelles island of Mahé at 8.45am local time, departing almost 2 hours later at 10.30am, to continue its journey to Reunion island.

Contacted by SNA, the Seychelles Hospital confirmed that a patient from the Air France flight had been admitted to the Intensive Care Unit.

No further information has been released about the patient's condition.