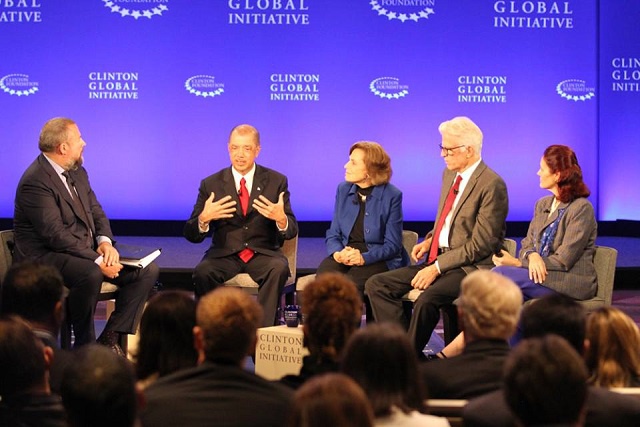 (Seychelles News Agency) - The urgent need for unified action against climate change and its impact on the world’s oceans was the core of Seychelles President James Michel’s intervention, while attending a special session of the 2015 Clinton Global Initiative and the launch of the Blue Guardians initiative in New York, on Monday.

The two events, to which Michel had been invited by the former US President Bill Clinton and the Clinton Foundation, was held on the sidelines of the United Nations General Assembly’s General Debate in New York.

“Climate change is hurting the sea which is the lifeblood of our Blue Planet... as such, non-action on the issue condemns humanity’s collective future to a dark fate,” said Michel in the statement.

“Seychelles has committed itself to be a Blue Economy pioneer. We have committed to empowering ourselves as Blue Guardians to not only empower island states, but to offer a new avenue for sustainable development and fighting climate change. And we know that many others share our aspirations,” he was also quoted as saying after the session.

The Seychellois Head of State then joined the Prime Minister of St Vincent and Grenadines, Ralph Gonsalves, to witness the launch of the Blue Guardians initiative.

This is a new initiative established by SIDS DOCK, which brings together member countries of the Alliance of Small Island States (AOSIS) as a collective body aiming to support SIDS to transform their national energy sectors into a catalyst for sustainable economic development and to generate financial resources to adapt to climate change.

Several international public and private organizations such leading private sector technology and data providers, the Clinton Climate Initiative, multi-lateral development organizations, including the World Bank; and conservation NGOs have also come on board to help facilitate this partnership.

The aim of the partners involved in the Blue Guardians initiative is to help develop sustainable island economies while increasing resilience to climate change to support coastal communities, marine and fisheries conservation, and clean renewable energy.

Michel has described climate change as the “single largest challenge” facing global leaders today while he called for individual actions to be geared towards achieving a comprehensive global approach to address the challenges.

“We aspire to empower ourselves as large ocean states- as 'blue guardians'. Our oceans are under threat as never before. But never before has the imperative of turning to oceans as true spaces of sustainable development been so pressing. Building on the Samoa Pathway, and on Sustainable Development Goal 14, we can build sustainable partnerships that focus on the strengths of islands and not their weaknesses.”

According to the State House statement, when announcing 'The Blue Guardians Commitment to Action, the former United States President Bill Clinton described President Michel as "an example of a leader helping to ensure resilient and sustainable oceans by protecting large areas of it."

And in the evening he also had the opportunity to engage with other Heads of States in a less formal manner during a reception organised by the US President Barack Obama at the New York Palace Hotel in New York.

The 70th session of the UN General Assembly has been dubbed ‘historic’ as it is welcoming the largest number of world leaders and also engaging them to commit to adopt and implement the new set of sustainable development goals aimed at ending extreme poverty, ensuring prosperity for all and tackling climate change over the next 15 years.

Michel is expected to address the assembly later today, during which State House has said he will be highlighting the Indian Ocean island nation’s motivations and ambitions in view of the post 2015 development agenda.

Seychelles has already highlighted the importance of goal 14 for SIDS, which sets out to conserve and sustainably use the oceans, seas and marine resources.

The Seychelles delegation in New York also include the Minister for Foreign Affairs and Transport, Joël Morgan, Seychelles Ambassador to the US and Permanent Representative to the United Nations, Marie-Louise Potter, Diplomatic Advisor to the President, Ambassador Callixte d’Offay and the Ambassador for Small Island Developing States and Climate Change, Ambassador Ronny Jumeau.