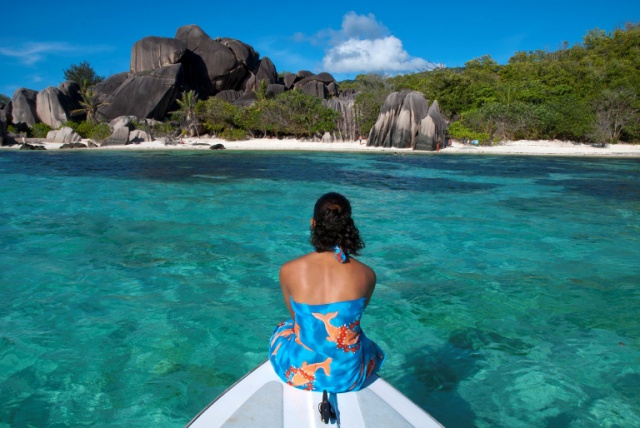 File photo: A boat approaching an island of the Seychelles, an archipelago of 115 islands in the Indian Ocean (Gerard Larose, Seychelles Tourism Board)

(Seychelles News Agency) - The owner of the sailboat Allegro, French sailing enthusiast David Mal spent three weeks drifting in Seychelles waters after the mast of his boat broke. He was rescued by a merchant ship and taken to Madagascar, SNA has learnt.

"The white and blue boat was found flying a South African flag, suggesting that it was based in South Africa, but after checking the registration number, it was found that the Allegro is registered in Dunkirk in France," Captain Joachim Valmont, director general of the Seychelles Maritime Safety Administration (SMSA), told SNA this morning.

"The boat owner called me and will provide us with the boat's ownership papers to confirm its identity," said Valmont .

He told me that it was almost three weeks he was adrift in the Indian Ocean, Valmont said .

Yesterday during the day Valmont told SNA  he had received a call from a person who would be called "Grégorie" from Nosy -be , an island northwest of Madagascar, one of the country’s largest tourist resorts, explaining that he was a friend of the owner of the boat .

" Mal decided to go sailing alone and experienced damage to the boat,  when the mast of the boat broke, near Saya de Mala , forcing him to abandon his ship," Grégorie told  Valmont, adding that Mal was rescued by a container ship which dropped him off at the port of Tamatave, also known as Toamasina, the second largest city of Madagascar.

The yacht was found drifting by the crew of the Seychellois fishing vessel Ti Lans , Tuesday, April 29 more than 150 kilometers south of Mahe, the main island of the Seychelles archipelago .

"A Seychelles Coast Guard vessel went to the location to verify the boat but did not enter it ," said Major John Attala, spokesperson for the Seyhelles People’s Defence Forces(SPDF) in a phone conversation with SNA

At the moment, the Seychellois fishing boat is still fishing in the southern area of the Seychelles 1.3 million sqaure kilometre exclusive economic zone in the Indian Ocean. It will tow the Allegro to the port of Victoria, expecting to arrive on May 6 .