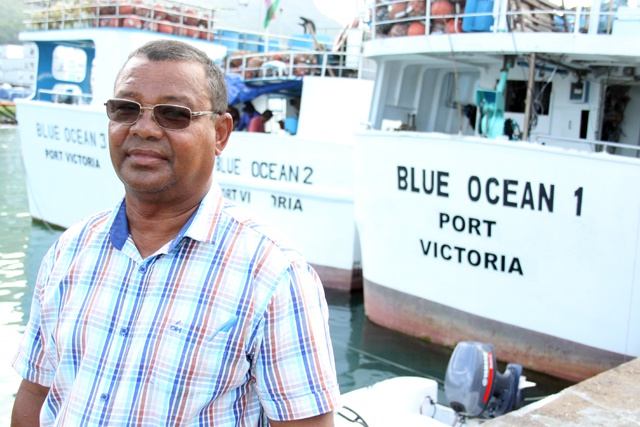 Benoiton who has teamed up with his son Dominic for this venture is expected to send out their fleet of three long line fishing vessels; Blue Ocean 1, Blue Ocean 2 and Blue Ocean 3 on their first fishing trip during the first week of October.

Currently, it’s Taiwanese, South Korean, Chinese and even Japanese flagged vessels as well as several Seychelles flagged but foreign owned vessels that are seen sailing the Seychelles waters targeting mainly tuna species. There is a Seychelles-based company, which is a partnership between a Russian and a Seychellois entrepreneur, Oceana Fisheries that also ventured into industrial long line fishing last year.

For Benoiton the arrival of his three vessels all second hand and bought from a Malaysian company, although they were originally built in Japan, is a culmination of a project conceived more than three years ago. The purchase of the three boats with a total capacity of 112 tons have cost some $2.7 million.

In an interview with SNA, Benoiton said that he had responded to the call for more Seychellois to help develop the blue economy, adding that he was happy to have realized his dream although he experienced some difficulty to obtain the necessary funding in the beginning.

The blue economy is a concept Seychelles is actively promoting locally as well as on the international scene, which not only encompasses fisheries but also tourism, trade, minerals and other related resources and ocean related activities.

“I am quite proud of it [being the first Seychellois to enter into industrial long line fishing] and I would encourage others to follow suit because it is our country and the resource is there, abundantly,” said Benoiton.

The new industrial fishing fleet is expected to be targeting tuna and tuna-like species. However, compared to the foreign owned vessels, which only transship their catch in the Seychelles Port of Victoria, before it is exported, Benoiton has indicated that the aim is to transform the fish into value added products for both the local market and for exportation.

Marine Investment Resources Seychelles Ltd, is therefore planning to build a factory to undertake all the value additions. The whole project, which Benoiton and son have funded partly through their own contribution in addition to loans given out by two commercial banks, will amount to over $7 million.

“The factory will be firstly to prepare the fish for the sashimi grade, loin etc…the loin will be mostly exported to Japan, China or Dubai that is where we hope the market will be,” Benoiton explained to SNA adding that negotiations are still ongoing to establish possible markets in those countries.

“We also want to obtain Japan's expertise to do other products…like burgers, sausages…”

Interestingly, Benoiton who is a resident of English River, a central district of the main Seychelles island of Mahé is not only into fisheries as he has been involved in the construction business for many years, owning the Benoiton Construction Company Ltd. (BCCL) which also imports various construction materials to help meet demands on the local market.

Fishing has however been close to his heart as his grand-parents were also involved in the fisheries business while he was growing up.

Although it is only now that the Seychellois entrepreneur has managed to acquire his own fleet of long liners, he has over 10 years of experience providing baits, mostly mackerel to long-liners fishing in the Seychelles waters, an activity he is now hoping to increase to benefit his own business.

Currently, Benoiton is employing a crew of 22 Indonesians, who sailed the vessels to Seychelles as he said they have quite a lot of experience and expertise, which he would like them to pass on to interested Seychellois. The idea is for the company to have an all-Seychellois crew manning the boats in five years' time. Increasing the number of boats in the fleet is also being considered.

“We intend to have two Maritime [Training Centre] students on each boats at all-time [to] be trained, and on our other fishing vessel there will be six of them so at all times we will be training twelve maritime students. At the end of the year at least we will [employ] two of them,” revealed Benoiton.

Together the vessels will require between 30 to 36 crew members to operate to their full capacity.

Port Victoria, the main port of the capital of the Seychelles islands, is one of the business tuna fishing ports in the world, where an average of 200,000 metric tonnes of fish are landed and transhipped every year.