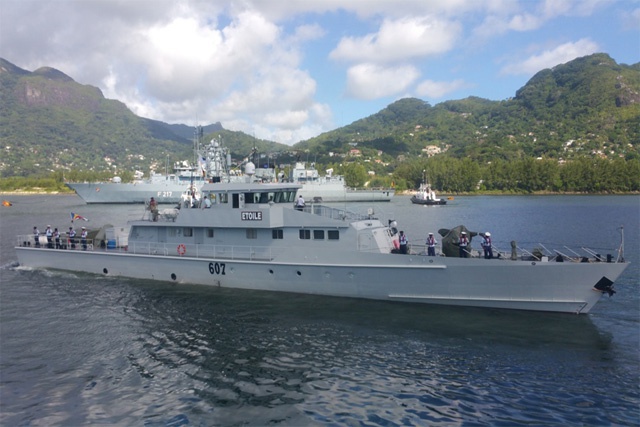 (Seychelles News Agency) - Two foreign fishing vessels will be escorted to the Seychelles Port of Victoria in the coming days, after they were intercepted by the island nation’s Coast Guard on suspicion of conducting unlicensed fishing activities within Seychelles waters.

According to a statement issued Thursday afternoon, the Seychelles Coast Guard (SCG) said the the two boats were spotted by one of its patrol vessels ‘Etoile’, late on Wednesday.

They were positioned some 561 nautical miles South-West of the main Seychelles island of Mahé, in the vicinity of the Cosmoledo Atoll.

“PS Etoile came across two vessels while on a routine patrol around the outer islands. A Coast Guard boarding team was subsequently sent on board to carry out a search and to question the crew,” adds the statement.

The two vessels reported to have sailed from Madagascar to Seychelles, are said to be carrying a combined crew of 29 Malagasy nationals.

The Public Relations Officer of the SPDF, Major Jean Attala told SNA that the authorities are waiting for the boats to be escorted to Port Victoria to confirm where exactly they are registered.

Officials of the Seychelles Fishing Authority (SFA) and the police have been dispatched to where the vessels are located to conduct more detailed search and collect necessary evidence.

The Seychelles archipelago consists of 115 widely-spread coral and granitic islands, and the nation’s Exclusive Economic Zone (EEZ) covers a vast 1.3 million square kilometres of ocean, an area which is often difficult to police for illegal fishing activities.