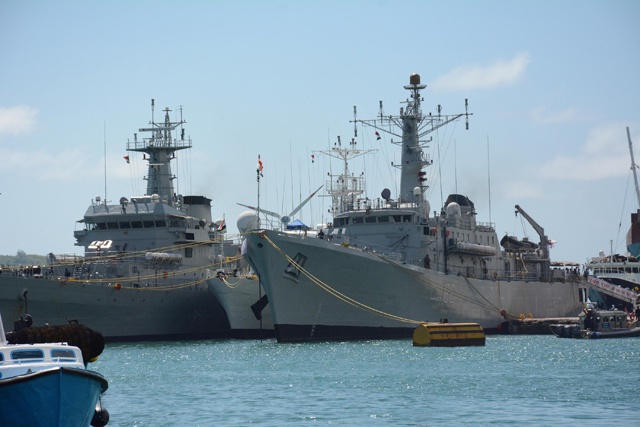 A view of the three Indian naval ships docked in the Seychelles Port of Victoria. (Joena Bonnelame, Seychelles News Agency)

(Seychelles News Agency) - The third annual Seychelles India Day celebrations extended by a day this year to fit what has been dubbed the 'IndiaFest 2015', is welcoming on top of over 100 musicians and singers to the Seychelles shores, at least 750 military personnel from India, for the four-day festivities.

Two Indian Naval Ships (INS) TIR and SUJATA as well as an Indian Coast Guard Ship (ICGS) VARUNA docked in the Seychelles Port of Victoria on Thursday, for a thirteen-day visit to the Indian Ocean archipelago of 115 islands.

Although the visit coincides with the Seychelles India Day celebrations, which is an opportunity to showcase various facets of the Seychelles-India culture and friendship, their deployment is also part of the scheduled bi-annual visits of Indian navy ships, to undertake surveillance of the island nations vast Exclusive Economic Zone (EEZ) covering 1.3 million square kilometres of ocean.

Members of the local press were given a brief walk around the three vessels on Thursday afternoon, which was an opportunity to interact with the officers on board.

The three vessels are in fact part of a fleet of six of the First Training Squadron, which forms part of the India’s Southern Naval Command in the port city of Kochi. As for the other three vessels, one is currently touring Europe and two are back in their home port.

The Squadron’s role is to provide 'at sea' training to trainee Naval and Coast Guard officers upon completion of their shore-based training. This includes seamanship, navigation, ship handling, boat work, engineering as well as exposure to life at sea.

The Commanding Officer of INS TIR, who is also the First Training Squadron’s Senior Officer Captain SR Ayyar told the local media that among the 750 uniformed personnel from the three vessels currently in Seychelles, there are 172 trainees, among which 4 officers from the neighbouring Indian Ocean island of Mauritius.

“The training period is for 6 months and every 6 months we have a new batch,” said Captain Ayyar.

“In the Indian naval academy two cadets [Seychellois] are training and they will be passing out in December, after which they will join the training squadron for this phase of training,” added Captain Ayyar.

Defence and maritime security is one of the major field of cooperation between India and Seychelles, which has been ongoing since the Indian Ocean island nation gained independence in 1976.

According to the Indian High Commissioner to Seychelles Sanjay Panda, over 500 personnel of the Seychelles People’s Defences Forces (SPDF) both existing and in the past have been trained in India as part of the Indian Technical and Economic Cooperation programme (ITEC).

“Today [Thursday] one young SPDF Officer has joined an MBBS Cource [Bachelor of Medicine and Bachelor of Surgery] at the Armed Forces Medical College, in Pune India. It’s a 4 year programme and he will come back [to Seychelles] as a medical doctor…,” said Panda.

Apart from participating in the Seychelles India Day which kicked off this afternoon with a fun and food fair, the contingent of Indian Naval officers will be engaging in other activities during their 13 day stop over in the Indian Ocean archipelago.

According to the Indian Advisor to Seychelles Coast Guard, Pradeep Singh Sethi they will be meeting SPDF and government officials to discuss bilateral relations in the field of defense.

They will also be conducting training for trainees at the Seychelles Defense Academy and Maritime Training Centre.

The three Indian Naval vessels will also be simultaneously undertaking surveillance of the Seychelles EEZ for about four days, where they will also be embarking Seychellois Coast Guard officers.

“In addition to EEZ surveillance they will also be imparting training to those officers in various aspects of firefighting, damage control and seamanship training,” Sethi told SNA.

Before leaving the Seychelles Port of Victoria the INS TIR and SUJATA and ICGS VARUNA will be open to the Seychellois public on Sunday October 11, from 10 am to 4pm.