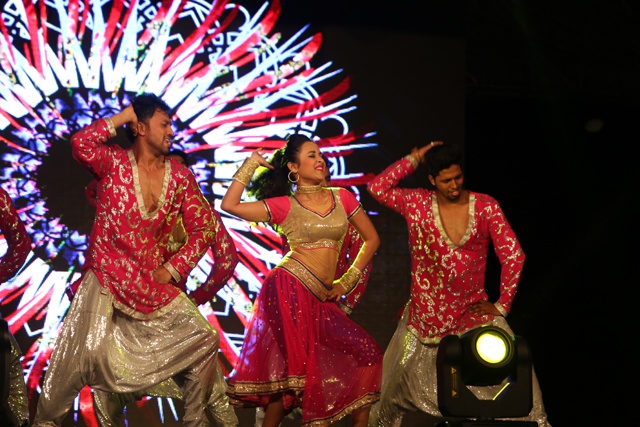 What a show - spectators to the Seychelles India Day musical spectacular on Saturday were thrilled by the quality of the singing, dancing and musical performances of the night (Joe Laurence, Seychelles News Agency)

(Seychelles News Agency) - For the past three years, the tiny Seychelles capital of Victoria every first few days of the month of October has been filled with glitter, sequins and the atmosphere of showbusiness.

Since the inception of the annual Seychelles India Day celebrations, a sizeable percentage of the Indian Ocean archipelago’s 93,000 inhabitants, both of Indian origin and of other demographical backgrounds, descend on the town’s small stadium for a musical gala night that celebrates Indian culture and heritage.

Saturday night was no different, and the stadium was packed to capacity with dignitaries, members of the local public and expatriate contract workers, all vying to get the best possible positions to see the spectacle on display.

And this year, as promised by the Seychelles India Day Committee, spectators were not disappointed with the star-studded lineup, featuring both Bollywood and South Indian dancers and musical talents, including Indian movie playback singers Haricharan Seshadri, Nakash Aziz, Andrea Jeremiah, sisters Prakriti and Sukriti Kakar, and Indian vocalist and songwriter Shakthisree Gopalan.

Nagarajan’s stellar performance was followed by the introduction of virtuouso guitarist Bennet Roland and his team of talented musicians, all together making up a group called ‘Bennet and the Band’, introduced with an amazing back-and-forth battle between the band and famed Indian violinist Balabhaskar.

Bennet and the Band’s skilful and energetic performance, which lasted for most of the evening, comfortably incorporated all the vastly different styles of the artists showcased during the event.

SNA sneaked a look backstage and interviewed some of the show’s stars, which included some of the dance troupes entertaining the packed audience.

Dancer Aayushi Bhave, who trained along with her troupe under three-time International Indian Filmfare Award winning choreographer Chinni Prakash, was herself star-struck from the experience of being in the beautiful Seychelles.

“I’ve been [dancing in this troupe] for about two years,” she told SNA. “It’s amazing, I just feel so good to be here, it’s one of the best places I’ve ever been to… and I’ve been to the United States, Muscat and Dubai.”

Praversen Yesambare, the choreographer of the ‘Ticket to Bollywood’ dance troupe, was equally enthusiastic about the show.

“This crowd is very nice, we are enjoying it because I have seen since yesterday, lots of South Indian songs are going but in between Bollywood is there, so the crowd is very energetic,” he told SNA. “Our production, Ticket to Bollywood, has travelled in more than 18 countries, and we performed at the Edinburgh Film Festival… today is the small version but tomorrow is the big cultural show.”

But perhaps one of the evening’s most technically outstanding performances was given by up-and-coming playback artist and compose Nakash Aziz. Originally from Mangalore, Karnataka, Aziz grew up in Mumbai and is currently enjoying significant recognition for his work on songs such as Gandi Baat, Sari Ke Fall Sa and his most recent, Afghan Jalebi, recorded for the Hindi film ‘Ya Baba’, starring Katrina Kaif and Saif Ali Khan.

He has also assisted Oscar-winning composer A.R. Rahman with the music for Hindi blockbusters such as ‘Highway’, ‘Raanjhanaa’, ‘Rockstar’, ‘Delhi 6’ and ‘I’.

But Aziz has revealed to SNA that the thing which has been uppermost on his mind since coming to the Seychelles has been finding his true love. He said he wishes to return to the Seychelles on a romantic honeymoon, but he didn’t know when that would be.

“I don’t know when… God-willing,” he told SNA jovially. “But I want to find a lady quick because I want to come back to Seychelles!”

Aziz also seemed happy to have a change of scenery from being cooped up in the recording studio in Mumbai.

“It’s always a good feeling to be performing in front of a live audience, and we take immense pleasure in attracting the audience firsthand, and especially coming to a place like Seychelles… we just want to be with the local people and Indians together.”

The twins, who are virtually indistinguishable from each other, were bubbly and fun, both on stage and off.

“I think until now we couldn’t wait to actually go up on stage and perform and I think a part of it is done; we have six more songs to go! And we love the crowd, I think they’ve been extremely receptive,” said Sukriti.

“Even the people in Seychelles are so nice; the hospitality is great, we are having like a ‘workation’ like they say – a working vacation!” laughed Prakriti. “It’s our first time in Seychelles, and if it wasn’t for this show we probably wouldn’t have known about it. I think I’m going to come back with my friends, because I’m seeing a lot of people with their friends and I’m like oh my god I miss my friends yaar! So that’s definitely on our bucket list.”

The sisters are also conscious of their responsibilities as Indian cultural ambassadors.

“And it’s a great honour to be here on India and being Indian, performing for an Indian audience as well as people from Seychelles it’s a great opportunity and we want to make the most of it, and represent our country,” Prakriti told SNA.

Even a few drops of rain at one point during the evening failed to dampen the spirits of the audience.

SNA spoke to Seychellois spectator Axelle Bodwell and her sister Anael, who were both dressed up in their glitziest Bollywood style.

Both sisters expressed their passion for Indian cultures and films.

“It was really beautiful, and it was really colourful,” Axelle said of the show. “I loved all the dancing and the singing.”

The celebrations continue on Sunday evening at the same venue with another musical gala featuring the talents of legendary composer A.R. Rahman.