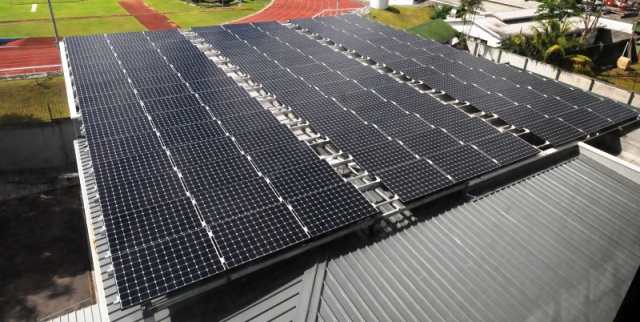 (Seychelles News Agency) - The Seychelles government is intensifying efforts to reduce the country’s dependency on fossil fuel by encouraging the use of renewable energy.

The island nation is seeking to make better use of the almost all year round sunshine with the launching of a new project to encourage more people to install photovoltaic systems to power their homes and businesses.

The Financial Rebate Scheme for grid connected rooftop photovoltaic systems launched Friday May 02, is a collaboration between the Seychelles government, the United Nations Development Programme (UNDP) and the Global Environment Facility (GEF) along with other local stakeholders.

The Financial Rebate Scheme will allow for anybody in Seychelles to have a 35 percent financial rebate on any PV system up to 3 kilowatt peak (kWp). Domestic and commercial entities alike, will be subsidized varying amounts (depending on sector and system size) when purchasing and installing solar PV systems.

The Global Environmental Facility and the Government of Seychelles, have created a fund of $1.4 million to be used under this component of the project.

The project will encourage the uptake of at least 1.3 Megawatt of installed PV capacity on the inner and outer islands of the Indian Ocean archipelago focussing on small businesses and domestic buildings.

“Achieving this target will reduce diesel oil consumption by approximately 390 metric tons every year. Collectively, the systems installed under the project will offset CO2 emissions by some 23,343 metric tons by their useful economic lives’ end,” said UNDP Programme manager for Mauritius and the Seychelles, Roland Alcindor.

A first group of people to be certified as installers will be trained this year, in the hope that there will be more capacity to meet the volume of installations which is expected go beyond the targeted 1.3 Megawatt.

Eventually to ensure that the grid can sustain even larger projects; a grid capacity analysis will be done to allow project partners, such as the Public Utilities Corporation and the Seychelles Energy Commission to better understand the extent to which they feed irregular sources into the grid.

The Seychelles Minister for Environment and Energy, Professor Rolph Payet, explained that in the last 10 years the main factor preventing people from investing in renewable energy project has been the cost, and even though all taxes were removed on PV equipment the Government has also had to adapt its legal and legislative framework to make it possible for households and businesses to generate their own electricity, which can now be fed into the national grid.

Earlier this year, the Ministry of Finance Trade and Investment, together with commercial banks and the Seychelles Energy Commission, launched the Seychelles Energy Efficiency and Renewable Energy Programme (SEEREP). This programme had started to address financing barriers by allowing consumers to secure loans at 5 percent interest rate.

“However interest rates alone do not drive the validity of PV. Capital cost is still the single most important factor, and to this end a financial rebate scheme has been envisaged as a means of cushioning initial investment,” said Payet.

Minister Payet added that Seychelles spends a significant proportion of its annual budget on generating electricity from diesel engines and since the systems under this scheme will be connected to the grid, it is expected that there will be a large reduction in diesel consumption which in turn will result in increased foreign reserves.

This project will set a precedent for other similar projects, and perhaps, in the near future, Seychelles will be able to make significant savings in the energy sector, avoiding important opportunity costs.

The island’s first large scale renewable energy project was officially inaugurated in June 2013. Consisting of eight wind turbines, the wind farm project is said to have been built to provide electricity to more than 2,000 homes.