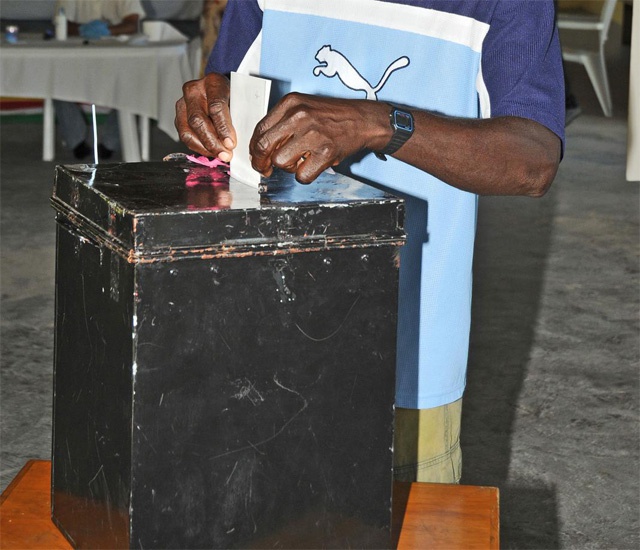 Presidential elections in Seychelles will be held in 6 weeks time from November 19 to 21, 2015. (Patrick Joubert, Seychelles News Agency)

(Seychelles News Agency) - Voters in Seychelles, an Indian Ocean archipelago of 115 islands with a population of around 93,000 people will be heading to the polls in 6 weeks’ time to choose a president among contenders in the upcoming presidential polls.

The elections will be held over three days from November 19 to 21 this year.

The Chairman of the Electoral Commission Hendrick Gappy announced the dates, which he said had been decided by the commission in accordance to Section 13 of the elections Act 1995, during a press conference in the Seychelles capital of Victoria, this morning.

This was in the presence of the four other members of the Electoral Commission and the Chief Registration Officer.

“The Commission was unanimous on working out the dates…we have foreseen should there be a second round we would have it done in the following 14 days,” said Gappy.

It was on Thursday last week that the incumbent president James Michel called for presidential elections highlighting that he will be seeking a third and final term of five years at the helm of the island nation’s government.

Now that the dates have been announced, the Electoral Commission will be accepting nomination of candidates on October 28. This is when the potential candidates will present their nomination papers, which will be made available as of next Tuesday – nomination of each candidates have to be endorsed by 500 people.

Aspiring candidates also have to secure 15 thousand Seychelles rupees [around $1,164] which has to be presented on the day before nomination day.

Aside of the ruling party, there are seven officially registered opposition parties in the Indian Ocean country with a population of around 93,000 inhabitants.

Although the opposition parties have not reached a consensus on proposals to form an alliance for the first round of voting, some of the parties have already indicated how they are planning to go into the elections, although most of them have not officially announced their presidential and vice presidential candidates.

Lawyer Alexia Amesbury, who is first ever female candidate to run for the post of President of Seychelles also leader of the ‘Seychelles Party for Social Justice and Democracy’ (SPSJD) confirmed to the SNA in May that she intended to participate alone in the upcoming election, same as Seychellois lawyer Philippe Boullé who has indicated that he will participate in his fourth consecutive Seychelles presidential election as an independent candidate.

Gappy has said that the Electoral Commission will be meeting with political parties ahead of nomination day to brief and guide them on the various recommendations that are provided for in the amended Elections Act of 2014 along with the amended Political (Registration and Regulation) Act 2014, both which came into effect in May this year, including campaign financing information which will have to be submitted to the Electoral Commission.

“The Commission has sufficient ample time to make itself ready…as time goes by we will evaluate our state of preparedness and definitely we will be ready for that occasion,” said Gappy.

“In terms of credible [election]…under the new law we produced a verification list every month. We will be amalgamating these list and produce what we call a revised register and that revised register have to be available for nomination day.”

Year-round voter registration and inspection of the electoral roll provided for by amendments to the Elections Act which came into effect in May this year, will be closed today, now that the dates the presidential elections will be held have been announced.

Several opposition parties have been contesting the credibility of the voters register, the main claim being there is a discrepancy in the number of voters and the statistics on population.

One of them, the Seychelles Party for Social Justice and Democracy led by Lawyer Alexia Amesbury and a registered voter Alexander Pierre, have brought the matter before the Constitutional Court.

According to an article in daily newspaper, Seychelles Nation, published this morning, three judges; Chief Justice Mathilda Twomey and Justices Bernadin Renaud and Crawford McKee  were unanimous in their decision to reject a request for an injunction prohibiting the Electoral Commission to announce the date of elections.

The Court is expected to hear the case on Wednesday next week when they will rule on the rest of the points of the petition.

Commenting on the issue of the voters register, Gappy noted the commission had given the public the opportunity to present their objections, which he said is the mode by which the register can be updated.

“We have not had much objections and that is one of the only ways we can update the register it’s not a question of just removing people on the register,” said Gappy adding that currently the law does not allow the commission to just remove a voter's name from the list.

In terms people who are overseas, according to Gappy, the amendments to the elections act which was passed on the 15th of May states that the diaspora who come to Seychelles and stay three months in the country are eligible to register as a voter.

“...If they leave tomorrow morning and go for a holiday or whatever, on the day of the election as long as their name is on the register they can come and vote,” he added.

Responding to a question about whether the Electoral Commission is considering undertaking a census of voters in the Indian Ocean archipelago in the near future Gappy agreed that there is a need to do so as there will also be a “National Assembly and possibly a Local Government election next year.”

This he said will not only help to update the voters register but will also help bring the electoral areas in alignment with the reality.

The Electoral Commission has indicated that the budget for the upcoming presidential elections is slightly over 8 million Seychelles rupees [over $620 thousand].

The commission has said that it will also be inviting both local and international organisations like the Commonwealth, L'Organisation de la Franchophonie and the Southern African Development Community to observe the election process.