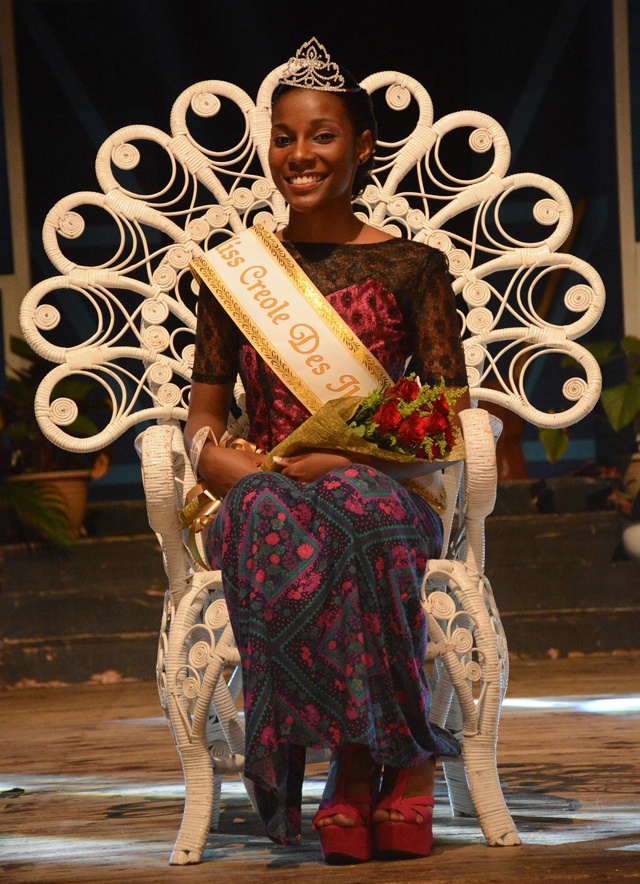 Eighteen year old Debbie Horsman says she is ready to embark on her journey as an ambassador of all creole-speaking countries. (Patrick Joubert, Seychelles News Agency)

(Seychelles News Agency) - Saturday evening saw the crowning of a young Seychellois woman who will now become an ambassador for all Creole speaking nations seeking to promote the creole culture and tradition.

Eighteen year old Debbie Horsman, was voted ‘Miss Creole des iles International’ by judges selected to choose among 9 contestants who had been courageous enough to join the pageant.

The first ‘Miss Creole des iles International’ beauty pageant had brought together a good crowd cheering the contestants as they paraded at the Seychelles International Conference Center in the capital, Victoria.

Initiated by a local modelling agency, Telly’s Modelling Agency, the pageant aims to revive the former 'Miss Kreol' pageant, which made its debut in 1994 as part of activities to mark the Festival Kreol, which takes place during the month of October each year.

Overwhelmed but obviously happy at the same time, Horsman shared her sentiment after being called the winner.

“I wasn't expecting it, but I am very happy to have won. [Now] I can start my journey to promote our culture and tradition,” said Horsman who is studying Office Management at the Seychelles Polytechnic.

The resident of North East Point, in the northern part of the Seychelles main island of Mahé has her eyes set on promoting the traditional dances of the Indian Ocean archipelago of 115 islands with a population of around 93,000 people.

In Seychelles, the Creole music includes the rhythmic ‘Sega’ and ‘Moutia’ of African origin as well other traditional dances of European origin - the “kanmtole”.

Horsman wants to get children in the schools to really enjoy dancing to the beats of the traditional music while she is keen on adding some modern elements to make it more interesting.

“I’m thinking of working [on the project] with the school of dance.”

Although some technical difficulties slightly delayed the start of the evening, the nine contestants were not deterred from giving their all in the pageant, which started off with an opening dance number on a beautifully decorated stage, portraying a traditional house of Seychelles in the backdrop.

The young ladies who had to be aged between 18 to 30 to be eligible to participate wowed the public in their beach, casual and finally evening wears, depicting Seychelles tradition and culture.

The evening also saw performances by popular Seychellois artist, while the determined contestants also showcased their talents, entertaining the crowd with two other traditional dance numbers.

Apart from the 'Miss Creole des iles International' title the judges also designated the winners of various awards, including Miss Personality, Miss Photogenic, Best Evening Wear and the Miss People’s Choice, chosen by the general public in the week before the big night via SMS text messages.

Miss Photogenic was attributed to Kimberly Joseph while Emma Denousse walked away with the prize for Best Evening wear.

Shanorah Laurence on the other hand walked away with the most votes as a result of the public voting.

All four award winners together with Horsman and Marie-Eve Joe were selected as the six finalists who had to face some tough questions put to them by the the judges, which included Maria Payet-Marie who won the first Miss Kreol held 21 years ago in 1994.

The audience was left to utter suspense as the judges then left to deliberate before eventually coming back to announce the grand winners.

Debbie Horsman, was crowned the winner by Alain St Ange, the Seychelles Minister for Culture and Tourism. The ‘Second Princess’ title was handed to Emma Denousse while Marie-Antoinette Robert was awarded the First Princess title.

To kickstart her mission as the new Miss Creole des iles International, Horsman will be taking part in various activities during the Creole month this October as Seychelles celebrates the 30th Festival Kreol.

According to the organizer of the pageant, Terry Carolla, also the Director of Telly’s Modelling Agency, when the month-long activities are over they will sit down with the Ministry of Tourism and Culture to discuss further plans.

“With regards to putting the show together, I would say that I am satisfied taking into consideration that it is the first time that we are doing it [and] the amount of work that we that was needed to get it done,” a proud and satisfied Carolla told SNA in an interview after the contest.

The contestants were groomed and trained intensely for two weeks to make the 3-hour-long pageant a success.

While the first Miss Creole des iles International was open solely for Seychellois nationals, Coralla and his team had already announced that they have their eyes set on attracting young women from other Creole-speaking countries, as of next year, turning the beauty pageant into an international event.

Carolla has confirmed that the next pageant, which is expected to see the participation of other creole speaking countries will also be held in Seychelles, after which the idea of rotating the venue for future pageants allowing each participating countries the chance to host the event, will also being considered.