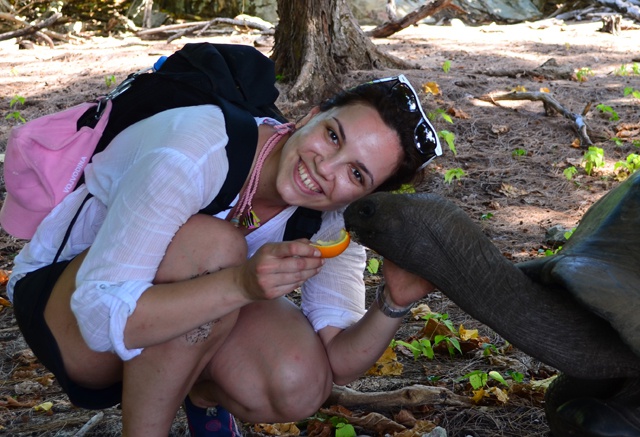 (Seychelles News Agency) - 32 year-old Nina Bogosavljev, a costume designer from Belgrade, Serbia, spent a month on Curieuse island in the Curieuse Marine National Park of the Seychelles, doing volunteer conservation work with other volunteers from the US and the UK with Global Vision International (GVI), which runs a volunteer programme on the island.

Nina got married to Stefan Bundalo, a Serbian actor, last year. They had met while they both worked at the National Theatre in Belgrade. She has also been an assistant costume designer on films shot in Serbia like Coriolanus (2011, leading actors Ralph Fiennes and Gerard Butler), but decided to change her career, and now with the experience on Curieuse island she plans to start a new life in environmental conservation.

SNA: From costume design in Belgrade, how did you end up on the GVI programme in Seychelles?

NB: I worked before as an assistant costume designer and after that I worked for Etihad as cabin crew for almost 2 years and I got the travel bug definitely. I was searching for a while where in the world I could go to do conservation work. My husband's sister who lives in London, showed me the GVI website. I was impressed how much they do around the world. When I saw all the pictures of the different species they are working with, I applied to come to Seychelles with GVI as a volunteer working on conservation programmes on Curieuse island.

SNA: What was your impression of Curieuse island?

NB: I saw Curieuse first as we came by a small boat from Praslin island. I was amazed. It was a beautiful sunny day, and I saw around Curieuse all these beautiful beaches and turquoise sea. You just live in the nature there and you feel how it changes quickly and you also feel the power of the nature, I have never experienced such a power of nature. We were snorkelling almost every day, with these amazing Seychelles granite rocks everywhere around. We also climbed the hills of the island.

Life is very basic there. It is a protected island, so there are no tourists, no hotels, no urban life at all. Tourists can come only during the day until 5pm, to visit the island, to see the beaches, the tortoises and also one museum which used to be a hospital for a leper colony. What is really nice is that we have our own resources, we are collecting energy from the sun using solar panels so we have our own energy, and we are also collecting rain water, so we use it for our showering and cooking, but for drinking we have a supply of water bottles. We also have our own garden where we can grow our own vegetables.. there are also mango trees.

SNA: What did you do there?

NB: We were doing different conservation work. GVI works closely with SNPA [Seychelles National Parks Authority]. We were collecting a lot of information about sea turtles, tortoises, coco de mer palms, birds and mangroves. The island is not too big but is very interesting and wild. There is a mangrove area on the island and a lot of coco de mer trees, and we surveyed them to find out how many there are and trying to find with GPS their position and making a map showing how many there, male trees, female trees, juveniles. During our walks we would often meet giant tortoises walking around, and we would mark them, in order to keep a track of their numbers and their way of life and adaptation to the habitat, as they were brought to the island from Aldabra.

SNA: The island does not have internet or phone connection, how did you cope?

NB: I was fine with it. At the beginning it was a bit weird but then you start respecting things that you have in everyday life which you don't have there, which is really good. You can realise how you don't need very much on a daily basis. We did not have a constant power source, we could only turn on the fridge two hours daily, and you take a shower two times every second day so you can save water as we were collecting rain water. But all these things are very adventurous and very interesting and you get used to it very quickly. I can just say it was really the best and I enjoyed it. Once a week we went to Praslin island to use the internet there, so I could keep in touch with my husband.

SNA: Did your husband mind that you flew off to the Seychelles for this programme, leaving him at home?

NB: No he didn't mind! He is busy rehearsing for a play, so he has a lot of work. He was not surprised as he knows me well. It's my nature. He has an amazing heart, and we love each other very much and trust each other very much. He understands I really wanted to do this.

SNA: What are your plans for the future?

I definitely want to be involved in nature conservation. I want to learn as much as I can about nature and spread awareness of it, which is very important at the moment for the future of our planet. Working with GVI was the best experience ever, which is something that I would like to continue doing in my life.

Nina left Seychelles over the weekend, but plans to come back for more conservation work.

More from Views on Seychelles →

A glimpse of the latest 5 star hotel in Seychelles: Savoy Resort & Spa

Hired to Fight Pirates, but Doomed by Boredom