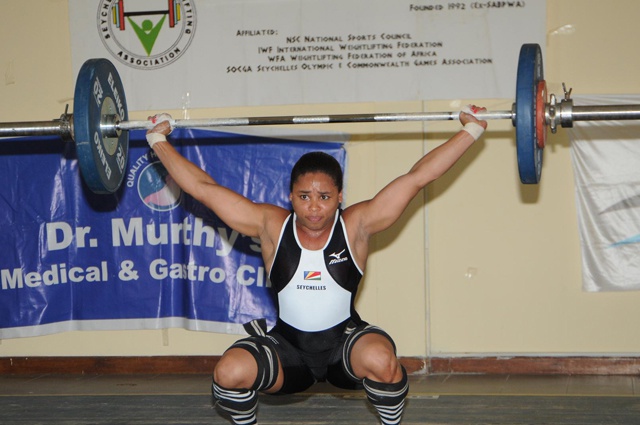 (Seychelles News Agency) - The year 2015 is proving to be a good one for Seychellois weightlifter Ruby Malvina who has achieved impressive results in three consecutive competitions.

After winning triple gold at the Indian Ocean island Games, in Reunion in August, followed by two gold and one silver medals at the All Africa Games in Brazzaville in September, Malvina has added another gold to her collection.

The 31-year-old achieved the feat on Tuesday at the 2015 Commonwealth Youth, Junior and Senior Weightlifting Championship taking place in Pune, India

Malvina proved tougher than her opponents competing in the 58 kg category lifting a total of 197 kg being 85 kg in snatch and 112 kg in clean and jerk.

The results placed her in first position ahead of Jenlyn Tegu Wini from the Solomon islands and Sethi Minati from India, in second and third position respectively.

“Malvina’s gold medal is another great achievement for Seychelles weightlifting, I was expecting a silver or gold and she did not disappoint us,” Coach William Dixie, told SNA in a short interview this afternoon.

Seychelles is among 22 countries participating in the 2015 Commonwealth Weightlifting Championship which started on Sunday and will be coming to an end tomorrow.

Apart from Malvina, Rick Confiance was Seychelles’ only other lifter at the competition, which has brought together some 181 lifters.

Competing in the men’s 62 kg category Confiance lifted a total of 235 kg which placed him in the 6th position.

Weightlifting is among sports disciplines in which the island nation is surely aiming to secure a qualification spot for the Olympic Games in Rio de Janeiro, Brazil in 2016, although Coach Dixie has remarked that this is not an easy task.

“Qualification [for weightlifting] is not like for other sports, and even if we qualify we only get one spot and will have to choose who will go.”

Another prominent female weightlifter of the Indian Ocean archipelago, Clementina Agricole is currently on a solidarity sponsorship training in the United States.

Agricole, who is Seychelles' Sportswoman of the year 2014 also won triple gold at the Indian Ocean island Games in August and one silver and two bronze medals at the All-Africa Games.

Her quest while training in the US is to aim for an individual qualification for the World Championship.

The World Weightlifting Championship will take place in Houston, USA, from November 19 to 28, 2015.