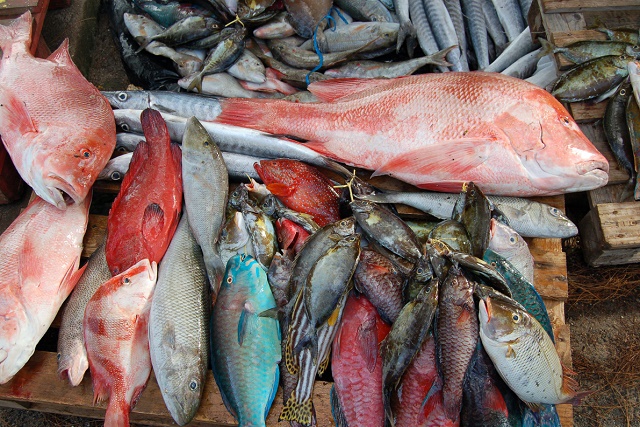 The prized 'Bourzwa' (red snapper) and other fish caught by artisanal fishermen in Seychelles for the everyday consumption of the local population. (Gerard Larose, Seychelles Tourism Board)

(Seychelles News Agency) - Artisanal fishing has long been the main mode adopted by fishermen from the islands of the Indian Ocean including Seychelles, to provide fellow inhabitants with their daily source of protein.

According to statistics published by the Seychelles Fishing Authority, SFA, the total catch by artisanal boats in Seychelles, an Indian Ocean archipelago of 115 islands with a population of around 93,000 remained more or less constant between 2004 to 2008 averaging to 4,285 metric tons per year.

In 2009, the artisanal catch is said to have dropped by 37% and remained more or less the same for the 3 years that followed up to 2012 with an average of 2658 metric tons per year.

During 2013, the artisanal total catch returned to the pre-2009 level after recording a considerable increase of 65%.

In view of the importance of fish to the diet of the islanders, artisanal fishermen are becoming increasingly conscious of the sustainability of fish stocks and other factors that may affect their livelihood.

The desire to work together to address these growing concerns have led to the creation of 'La Fédération des Pêcheurs Artisans de l'Océan Indien' (FPAOI) [Indian Ocean Federation of Artisanal Fishermen].

The Federation composed of the five member countries of the Indian Ocean Commission, Mauritius, Reunion, the Comoros, Madagascar and Seychelles was officially launched in Seychelles last week.

Seychellois Keith Andre, Chairman of the local fishing boat owners association was elected president of the FPAOI at the first meeting.

"We wanted to have an organization that will help protect the cultural values and the lifestyle of artisanal fishermen so that they can still find their place in a world that is increasingly ignoring these values," said Andre, in an interview with SNA.

The group is therefore aiming to strengthen fishing associations and communities across the Indian Ocean region by allowing all members to attain the same level and to provide for the opportunity for them to exchange expertise and best practices.

This will surely build on initiatives such as the visit undertaken by a group of Seychellois fishermen to Rodrigues, which forms part of the territory of the neighbouring Indian Ocean island of Mauritius, last year.

The aim of the visit was to see the implementation of a management plan targeting octopus fishing as over-exploitation of species in the island’s lagoon has resulted in a drastic decline of its stocks.

Such attention to marine species that are constantly being exploited also exist in Seychelles.

Fishermen from Praslin, the second most populated island of the Seychelles archipelago together with the Seychelles fisheries authorities for example have also proposed a coastal fishery management plan for the island.

Seychelles also has an ambitious plan to implement the world’s first country-wide Marine Spatial Plan (MSP). Currently, only around one percent of the almost 1.4 million square kilometres of the archipelago’s Exclusive Economic Zone (EEZ) is protected as marine reserves, leaving the country’s amazing variety of tropical marine wildlife at risk from overfishing and exploitation, but the marine protected areas are soon set to increase to 30 percent under the MSP.

One of the main priorities of the federation is to establish a common mode of communication as the federation is currently headquartered in Reunion Island, a French department in the Indian Ocean, although Seychelles holds the presidency.

The secretariat is however expected to relocate permanently to Seychelles, after the first two years.

Andre explained that the federation will be a mechanism that will allow artisanal fishermen in the region to play a more active role in the management of their marine resources.

"The conservation of marine resources is one of the main reasons why the islands have decided to come together to create the federation. This will allow us to speak with one voice."

Port Victoria, the main port of the capital of the Seychelles, an Indian Ocean archipelago of 115 islands, is one of the busiest tuna fishing ports in the world, where an average of 200,000 metric tonnes of fish are landed and transshipped every year.

Fisheries which is considered the second pillar of the economy after tourism, account for an income of $370 million yearly into the Seychelles economy, according to statistics from the Seychelles Fishing Authority.

The Indian Ocean Federation for Artisanal Fishermen will also be addressing issues such as the increasing demand for fish and fish prices, which is a concern not only for Seychelles but for other Indian Ocean island as well.

The most important project planned for 2016 is expected to see the opening of a fish centre, funded by the European Union that will allow fishermen to generate a better income from their catch.

"We will launch a pilot project along with the SFA that will bring the fishermen closer to their customers. We want to open a fish center to eliminate “middlemen" who are the main culprits contributing to the increase in fish prices," added Andre.

The federation is hoping that other countries such as the Maldives, Sri Lanka and others in East Africa that are also part of the Indian Ocean, would also consider becoming members of the association in the future.