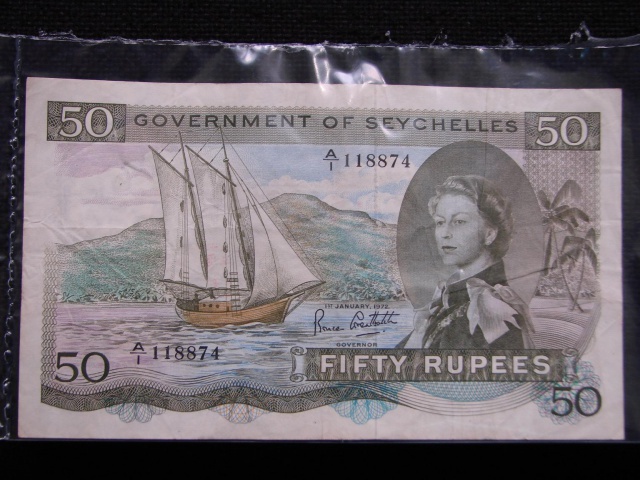 One of two 50 Seychelles rupee bank notes dating back to the 1970's that are in the possession of the Central Bank of Seychelles. (Patrick Joubert Seychelles News Agency)

(Seychelles News Agency) - What seems to be a much sought-after collector’s item, in the form of a 50 Seychelles rupee banknote, believed to feature the word “sex” secretly written behind a portrait of the Queen of England, has been auctioned, fetching a little over £100 more than the estimated winning bid.

According to an article published by the BBC on Friday, the note was sold to the highest bidder for £336, although the estimated winning bid had been set at £200.

The auction was organised by the Duke's of Dorchester's auction house in South West England.

“The 50 [Seychelles] Rupee [note], which dates back to between 1968 and 1973, was sold alongside other historic coins and notes” reads the BBC article.

A representative of the auction house confirmed to SNA in an email, that the note had in fact been sold to an "internet bidder" without divulging any more information.

After news emerged that the note would be auctioned in England, the Central Bank of Seychelles confirmed in interview with SNA in August this year, that it also has two of the 50 rupee notes with the portrait of the Queen issued in the 1970s, in its possession.

The reserve bank noted that these notes are being kept in its archives and are not to be sold.

CBS' head of banking services Mike Tirant told SNA that through research conducted for the publication of a book on the history of Seychelles' money, which was published in 2007 and 2008, CBS had found an article dating back to 1972, which reported on what had been interpreted as the word "sex" secretly written in the palm trees featured behind the portrait of the Queen on the 50 rupee note.

It is to be noted that the issuing of the banknote with the portrait of Britain’s Queen Elizabeth II and some coconut trees in the background, dates back to the time Seychelles was still a British colony.

The Indian Ocean archipelago of 115 islands gained its independence in 1976, although the banknote of interest was withdrawn from circulation in 1973.