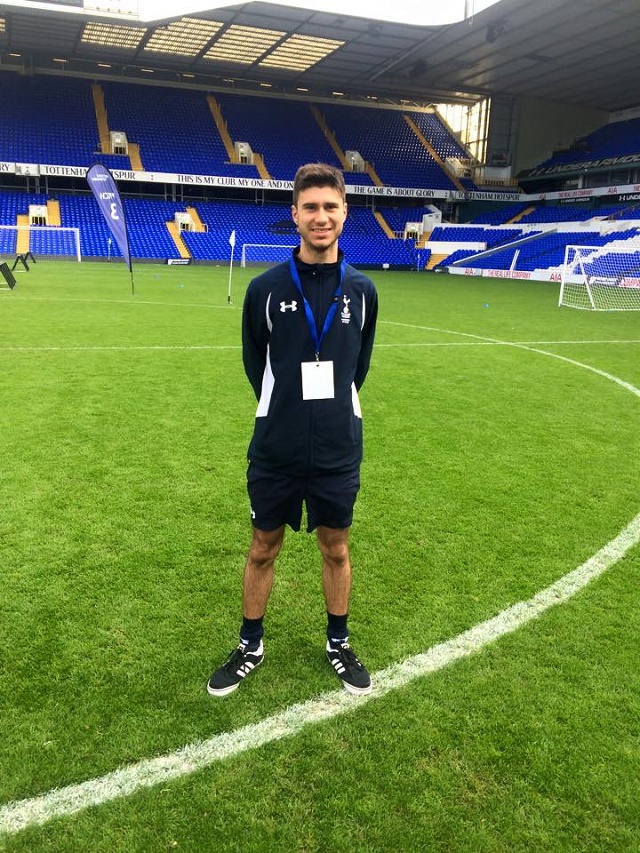 (Seychelles News Agency) - Football being one of the most popular sports among people in Seychelles, placing them among the estimated 3.5 billion football fans worldwide, getting the opportunity to get close to any big action or big names in the sport would leave any of the islander fans buzzing for days.

That is exactly what happened to Seychellois national, Reza Udwadia, when he walked onto the White Hart Lane pitch, the home turf of one of UK’s Premier League contender Tottenham Hotspur, in May this year.

For Udwadia though, who has been in Tottenham, London, since September last year, the dream is bigger than just being close to some big action.

The 20-year-old who developed a passion for football at the very start of his teenage years, has embarked on a mission to train as a professional football coach, at the Tottenham Hotspur Foundation, with financial support from this parents.

While sports is something which people practice for various reasons either for the thrills of the competition, to simply keep fit or even as a past-time, there are many instances where people who are gifted enough also choose to make a professional career out of their preferred game.

Seychelles, a small island nation in the Indian Ocean is no exception with many of its population of around 93,000 people being active sportsman or simply ardent fans.

Udwadia joins a handful of Seychellois who have dared to dream it big over the years when it comes to football, with a few of them being lucky enough to get a feel of what it means to play in big competitions like the UK’s Premier League and Germany’s Bundesliga.

SNA caught up with the coach in the making through an email interview to learn about his studies at the Tottenham Hotspur Foundation, his passion to pursue a career in football instead of pharmacy which seems to run in the family and also an interesting family origin.

SNA: Can you start off telling us a little bit about yourself and your family as it seems you come from an interesting background?

RU: I was born in Seychelles on April 22, 1995. When I’m in Seychelles for holiday, I live at La Misere with my mother, father and sister.

Subjects I took at A-levels were Geography, Biology and Business Studies.

From my father’s side, our ancestors emigrated from Persia [today known as Iran] to India and became known as Parsees. In the early 1900’s a small community of them settled in Seychelles, including my grandfather and grandmother which resulted in my father [Behram Udwadia owner of the Behram’s pharmacy] being born in Seychelles

On my mother’s side, things are a bit more complex but to simplify it, my grandmother was from Serbia but fled to Holland during the Second World War where she met my grandfather [a Dutchman] and had my mother.

My mother used to be a cabin crew on Martinair Holland, the airline flying for Air Seychelles in 1984/1985, which resulted in my parents meeting at Beau Vallon beach [one of the most popular beach in the northern part of the Seychelles main island of Mahé] and the start of their love story!

So in a nutshell I was born in Seychelles but my origins are from Persia, Serbia and Holland.

SNA: About football has it always been a passion of yours and how did the interest to study Applied Football Coaching and Performance?

RU: I have always been Sport orientated but it was not all about football until I turned 13. I used to do tennis, cricket, judo, swimming and sailing but eventually I found my passion in football.

The interest came about through the football camps I attended in my teenage years. From the age of 14-18 I attended football camps every summer in Holland (ProCamp), England (Manchester United Soccer Schools) and Spain (FCBESCOLA).

The coaches who taught me were very knowledgeable and took a huge interest in their job of developing players. So I thought to myself, I want to be like that. With all the knowledge I attained from the camps, why not further it and pursue a career in coaching, and that is exactly what I am doing. Also, I was and still am an average goalkeeper so I believe coaching is a better route for me.

SNA: Why sports and not pharmacy as it seems there is an interest in that field in your family?

RU: Indeed there does appear to be an interest of Pharmacy in my family, with my father and sister having careers in that field, however I have always been Sport orientated so it was just not for me.

It’s not like I do not have an interest in it though. Sport Science, which is a fundamental department in modern day football involves the use of pharmaceuticals. So having two pharmacists around me is not a bad thing! I get handy advice from them.

SNA: What exactly does the study of football coaching involve?

Aside from that, I will also be required to get my coaching badges. I currently have the level 1 certificate.

SNA: Since when did your training start there and how did you come across the Tottenham Hotspur Foundation?

RU: I enrolled on the course in September 2014. I came across it via a friend who sent me a link of the study. I was actually preparing to do a course in Holland, which involved all Sports but this one suited me better as it is football only.

SNA: Why did you choose coaching though instead of training to be a professional football player?

RU: I chose coaching for two reasons. Firstly, due to the limited opportunities in Seychelles I felt that I could go further as a coach rather than a player, and secondly due to the football camps I attended where I was inspired by coaches to be like them.

I have also been inspired by local coaches, most notably coach Gavin Jeanne who coached me when I was playing for the International school team and Coach Gerald Gonthier who coaches at Victoria City, the club I play for when I am back in Seychelles.

[In fact] three coaches really inspired me to pursue a career in coaching. Two of them were from camps I attended in England and Spain.

SNA: How long is your studies for and are you planning to come back to train the Seychelles National Football team maybe or will you be staying in the UK?

RU: The study is for two years at the Tottenham Hotspur Foundation and after that I plan to do one more year at Middlesex University.

In this moment of time I cannot give a solid answer. It would be nice to work with the Seychelles Football Federation and help develop football in Seychelles as I feel a lot of doors are waiting to be opened, but I don’t feel ready to come back home yet.

I want to travel, explore new places. I’ve lived in Seychelles all my life, seen and done everything. Factors externally from football always play a major role in my decisions.

SNA: Do you come to Seychelles often and are you already sharing what you are learning with some local teams?

RU: I try to come back home twice a year to see family and friends. For the summer holiday, I was here from June till September!

I could not envisage myself sitting on the beach the whole time so I took up a coaching placement with my club Victoria City and occasionally the Seychelles National U16’s team where I put into practise what I learned in my first year.

SNA: How do you see Seychelles football and how does it compare to what you are seeing in the UK?

RU: From my opinion, football in Seychelles still has a long way to go. The key fundamentals [players, coaches, passion and infrastructure] are there, but need to be taken to the next level.

Sport Science and Performance Analysis are two things I believe need to be improved. In England, football is so sophisticated in every department, it’s ridiculous, but that of course is greatly influenced by the money invested.

SNA: What do you think is missing for Seychelles football to reach a higher level then?

RU: I believe external influence is needed. All the right components are there but they need to be developed. This can be done by trading and sharing ideas with countries which are successful in football, all the way from grassroots to elite level.

SNA: Tell us a little bit about your experience being in Tottenham, have you met any well-known players for example?

RU: My experience for the short time I have been in England is vast. One of the modules on the course includes visits to Tottenham Hotspur’s training ground which is incredible.

In May, I had the opportunity to walk on the White Hart Lane pitch for an event hosted by the Foundation which left me buzzing for days. Attending matches to see the likes of Hugo Lloris, Christian Eriksen and Harry Kane has also been great.

Away from football, I enjoy exploring London as well as having a good time with my friends. I could not have picked a better bunch of people to study/live with.

SNA: Will coaching then be your definite career or you have other interests?

RU: For now, coaching is the career I want to pursue but the study develops transferrable skills which can be applied in many other careers. What the future holds, I don’t know. One step at a time.