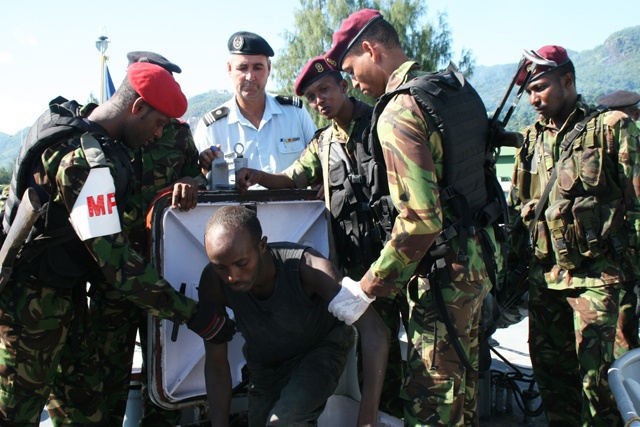 File photo: A Somali pirate, part of a group of 6 pirates caught at sea by the Seychelles defence forces after they had taken a Seychelles fishing boat hostage , 31 March 2010. The islands nation is now readily sharing its experience prosecuting suspected pirates to interested West African nations. (Seychelles News Agency)

(Seychelles News Agency) - Having played a pivotal role in countering maritime piracy around the Horn of Africa and in the Indian Ocean region, Seychelles is now readily passing on lessons learned over the last few years. Three West African countries; Togo, Ghana and São Tomé and Príncipe have shown an interest in learning from the Seychelles experience, with a particular focus on its prosecution model, which has been dubbed a “successful model.”

Seychelles ended up placing itself at the forefront in the fight against piracy, as the scourge that began to plague the Indian Ocean since 2005, had a direct impact on the country's tourism and fisheries sectors.

While pirate attacks off the vast coastline of Somalia have declined, from 236 in 2011 to two reportedly unsuccessful attacks in 2014, thanks to international counter-piracy cooperation efforts, the scourge has to some extent spread to the West African region, more precisely in the Gulf of Guinea.

According to a UNODC report, much of the piracy that affects West Africa “is a product of the disorder that surrounds the regional oil industry as a large share of the recent piracy attacks targeted vessels carrying petroleum products.”

Nigeria is one country that has been most affected, including having its citizens taken as hostages.

Nevertheless, Togo, Ghana and São Tomé and Príncipe being its neighbours, are not remaining indifferent although they have barely had to respond to piracy threats.

The three African nations want to adopt what they have called ‘a preventive approach’ to a potential menace.

“Togo has over 100 vessels that are docked every night [at its ports]… …it’s become a port of refuge for vessels in the area to stay docked before continuing their journey. So there is a need to prevent any incidents to protect our partners’ interest and in the interest of international conventions which Togo has signed,” Hubert Bakai, the cabinet secretary from the Ministry of Oceans of Togo, told local journalists on Tuesday.

This was during a press conference, at the end of a two-day fact-finding mission of a delegation from the three West African nations.

“The port of Tema is a very essential port for Ghana’s economy. If we fail to protect that particular interest, it will be of greater concern to Ghanaians, because the economic benefits that we acquire from the port is such that we cannot sit down and wait for pirates to attack our port,” added Assistant Superintendent Richard Odartey from the Marine Department of the Ghanaian Police.

According to the United Nations Office on Drugs and Crime, UNODC, which has facilitated the visit, the main interest lies in the Seychelles prosecution method that has proved to be a successful one in apprehending and prosecuting suspected pirates.

UNODC is one of several international partners that has worked actively alongside Seychelles over the last few years to tackle piracy.

“What UNODC has done is that we have brought these delegations and we have worked them through what is known as the piracy prosecution model and the five steps involved. This is a very successful model that has worked in Seychelles and the East African region. We are keen for our representatives from the West African region to take examples and adopt whatever is appropriate,” UNODC’s country programme officer for maritime crime Shanaka Jayasekara told journalists.

At the height of the piracy attacks in the region, several groups of Seychellois fishermen were also held captive and subsequently released by Somali pirates, the last being a pair of elderly fishermen who were released in 2011, after over a year spent in captivity.

Seychelles has been conducting piracy trials since 2010, after the National Assembly amended the penal code to allow the prosecution of pirates, including suspected Somali pirates apprehended by foreign international forces and handed over to Seychelles to be tried.

This is based on the concept of universal jurisdiction, which allows states or international organisations to claim criminal jurisdiction over an accused person regardless of where the alleged crime was committed, and regardless of the accused's nationality, country of residence, or any other relation with the prosecuting entity.

To date, Seychelles has prosecuted the most pirates compared to other countries in the region having tried 142 suspected pirates in 17 piracy trials over the last six years. This has resulted in the conviction of 138 pirates, although there have been a few cases where the Seychelles Court of Appeal has overturned, such convictions mainly because of a lack of evidence or because the accused were considered to be minors.

Following what they have gathered through their visit, the representatives of Ghana, Togo and São Tomé and Príncipe have all indicated that they will be going back to their respective countries' higher authorities to push for the same model to be adopted.

The delegation also had the chance to visit the main incarceration facility, the Montagne Posée prison, situated in the lush tropical mountains leading to the western part of the main inhabited island, Mahé, where according to figures provided to SNA in September, some 31 Somalis are still being detained.

Most of the convicted pirates have already been transferred to their homeland to serve sentences imposed on them for piracy acts committed either at the Garowe (Puntland) and Hargeysa (Somaliland) prisons.

The delegation also visited a new Court facility that opened its doors earlier this year focusing on piracy and other maritime related crimes.

It is to be noted that this is not the first time other countries, as well as regional and international organisations, have turned to Seychelles to learn from its experience in tackling piracy.

Although international efforts have led to a decline in piracy cases, constant monitoring and analysis of the regional situation by interested groups have led to warnings that the threat is still looming.

According to an AFP article published last month, a new report has indicated that rampant illegal fishing by foreign trawlers off Somalia's once pirate-infested coastline could push the Somali communities back to piracy.

The issue of unlicensed fishing also seems to be of great concern on the other side of the continent. Togo, Ghana and São Tomé and Príncipe that already have regional corporations to patrol the waters that surround them noted that their visit to Seychelles was also geared towards learning from the island nation's way of tackling other maritime related offences other than piracy, including illegal fishing.