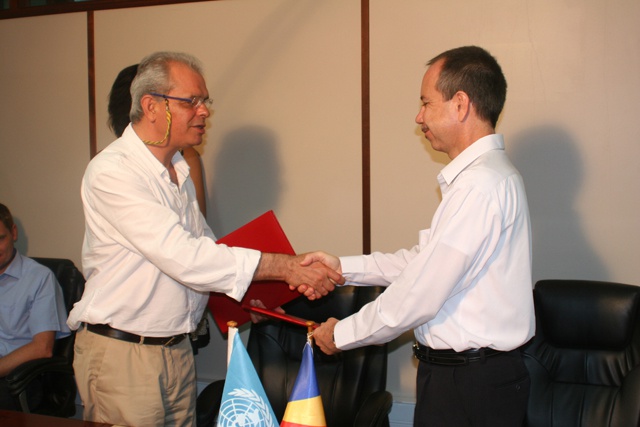 (Seychelles News Agency) - The United Nations Office on Drugs and Crime (UNODC) is providing financial support to Seychelles, worth around $300 thousand this year that will pay for costs involved in prosecuting suspected Somali pirates being tried in the Indian Ocean island state.

These costs include the provision of legal aid, paying for interpreters during trials as well as paying for the repatriation back to Somalia of convicted pirates to complete their sentences in their homeland as well as suspected pirates who were not charged.

“This is part of what we call burden sharing, it shows that the international community through the UNODC is supporting and continuously renewing its support to Seychelles in its efforts to fight piracy (…..) This is important because we have a number of suspected Somali pirates in the Seychelles prison and we never know tomorrow more Somali pirates may be brought to Seychelles to undergo trial in the context of piracy in the Indian Ocean,” said Morgan in a press interview after the signing.

There are currently 37 Somalis prisoners in Seychelles' prisons system of whom 13 have already been convicted of piracy and 23 are awaiting trial.

The island country prosecuted the largest number of Somali pirates compared to other countries of the region between 2009-2013. To date 124 pirates have been convicted. Most of them have been repatriated to Somalia to serve their sentences.

For his part, Vila Del Castillo reaffirmed the UNODC's commitment to enhance cooperation with the Seychelles during his mandate over the next five to six years.

“On some issues Seychelles could be a model for other countries, for example the establishment of the Regional Fusion and Law Enforcement Centre for Safety and Security at Sea (REFLECS3) and also the model that has been undertaken with the University of Seychelles in training policemen (…..),” said Vila Del Castillo.

Over the last 4 years UNODC has provided several forms of assistance to the Indian Ocean island archipelago be it in terms of extension of prison facilities, training for law enforcement officers, equipment, prisoner transfers to Somalia and support for the judicial system like the construction of a Supreme Court annex amongst others.

The UN funding, worth in excess of $ 4 million, has significantly increased Seychelles’ capacity to counter piracy and helped the island nation become the most active piracy prosecution centre in the region.

UNODC has also pledged support to Seychelles for rehabilitation of heroine drug addicts.

“UNODC is working on a programme to help us, at my ministry’s level, and the ministry responsible for Social Affairs to be able to help the drug victims. And this is very important in order to help us reduce this problem which is quite alarming,” said Morgan.

Heroin use in the Seychelles islands is a major health concern, as there are an estimated 1,000 heroin users in the 90,000 population nation, according to estimates reported in a 2011 study on injection drug use in the islands conducted by the country's Ministry of Health. These statistics led the United Nations 2013 World Drug Report to conclude that Seychelles has one of the world’s highest rates of intravenous drug use.

The National Drug Enforcement Agency (NDEA) deputy chief officer Liam Quinn said in a statement in February this year that the figures are different in recent assessments.