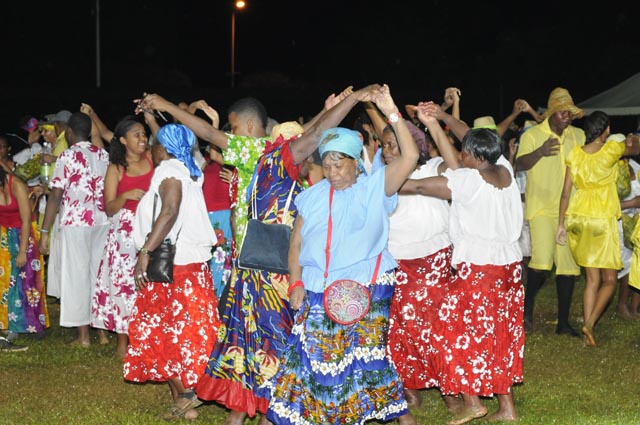 Colourful costumes, traditional objects, rhythmic dance and music invaded the Seychelles capital of Victoria on Saturday in spite of the rain as the 30th Festival Kreol was lanuched. (Patrick Joubert, Seychelles News Agency)

(Seychelles News Agency) - A gloomy sky and heavy downpour of tropical rain, did not deter a good crowd of Seychellois and visitors from other Creole nations from coming down to the Seychelles capital of Victoria late Saturday, to witness the unfolding of the annual celebration of the island nation’s Creole heritage.

This year marks the 30th Festival Kreol [Creole Festival] and as is customary the event is seeing the participation of other Creole nations including from the Indian Ocean islands of Mauritius, Rodrigues and Reunion.

'Laserenad' [serenade] followed by a 'Pipili' where different groups dance to the beat of Seychelles traditional music, which has been forever present on the programme of activities organised during the annual Festival Kreol, kicked off the celebrations.

Normally held on Saturday afternoon, as the blazing hot sun shines in Victoria, this year’s 'Laserenad' took a different turn. Participants ranging from children up to the elderly citizens showcasing a chosen theme depicting and promoting the creole culture were to parade a shorter route starting at 6pm local time, only 30 minutes prior to the official launching of the festival, at Stad Popiler, a stadium in the centre of Victoria.

In spite of the pouring rain over 200 participants danced to the tunes of traditional Creole songs as they entered the stadium, dressed in colourful costumes and wearing or carrying accessories depicting the Creole culture and tradition.

Old lamps, musical instruments, women wearing colourful hats, while others had their hair styled in different ways and scenes depicting traditional ways of life including a typical traditional wedding, are only a few of the displays that entertained the crowd.

“We’ve been striving for Creole to take its rightful place for 30 years; I think all the activities planned will do well. The rain will not stop us [the Seychellois people] from celebrating such an important anniversary. I myself feel so proud and came to give my support,” a lady in her 50’s told SNA.

“Festival Kreol festival is an event that we must celebrate. We might not wear our traditional clothing every day, as we are living in modern times, but we are still proud to be part of the Creole nation and our presence today is proof of that,” said an 18 year old attending the event on Saturday evening.

Commenting on the 30th anniversary of Festival Kreol this year, the Seychelles Minister for Tourism and Culture Alain St Ange noted that over the last three decades the Indian Ocean archipelago with a population of around 93,000 people, has made a special effort to ensure that the Creole heritage is given the status it deserves and is made known worldwide.

This was also highlighted by the Seychelles President James Michel who recounted how what was once a modest celebration has turned into a manifestation of the Creole identity, culture and tradition and the uniting of the global Creol population in Victoria, which has been dubbed the world’s Creole capital.

“The Festival Kreol remains the means of developing and promoting our culture. In return our culture has become an important asset in the development of our tourism industry and our campaign to promote Seychelles in the current climate where we are facing tough competitions,” said Michel.

The Seychellois Head of State has called for an assessment of the 30 year journey of the Festival Kreol to determine whether it is getting adequate recognition as the most important cultural manifestation of our country or whether it is being marginalized.

The official launching ceremony of the 30th Festival Kreol also saw an array of performances by Seychellois artists as well as guest artists from other Creole nations, while people could also enjoy a variety of traditional food and snacks outside of the stadium.

In spite of the official opening being held on Saturday, activities to mark this year’s festival started since the beginning of the month of October this year as it is marking the 30th anniversary.

The month-long activities will come to an end on Saturday October 31 with the annual all-night creole ball (bal asosye) which is also one of the most popular event on calendar of activities for Festival Kreol.

SNA presents a collection of photos taken on Saturday evening at the launching of the 30th Festival Kreol and Laserenad in the Seychelles capital of Victoria, (Patrick Joubert, Seychelles News Agency) Photo License: CC-BY