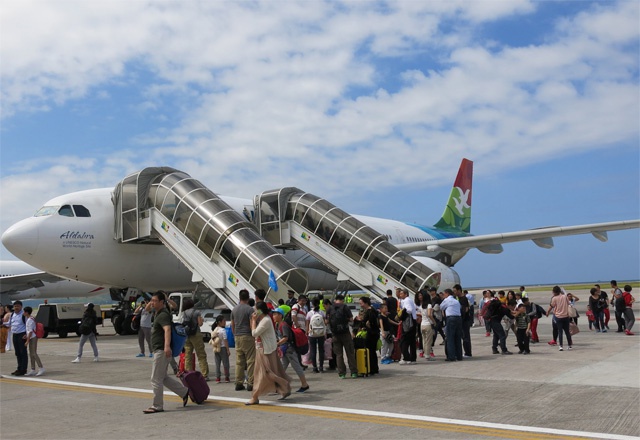 Tourists landing in Seychelles at the international airport. IMF has credited Strong tourist arrivals along with an expansion of credit to the private sector for its upward revision of the island nation's projected growth in 2015. (Patrick Valmont, Air Seychelles)

(Seychelles News Agency) - The International Monetary Fund, IMF, has revised Seychelles’ projected economic growth to 4.3 percent for 2015, up from the predicted 3.5 percent indicated in March, citing strong tourist arrivals and expansion of credit to the private sector.

The IMF statement published on its website on Wednesday, comes at the end of the visit of an IMF mission to the island nation, to conduct the third review under the Extended Fund Facility (EFF) Arrangement with Seychelles.

The mission, led by the IMF Mission Chief to Seychelles, Wendell Samuel, spent two weeks in the island nation between October 15 to 28, 2015.

They met and held discussions with the several groups including government officials as well as representatives of the private sector and civil society.

Samuel who was conducting his first mission trip as the new IMF Mission Chief to the island nation, also met with the Seychelles President James Michel, at State House in the Seychelles capital of Victoria on Tuesday.

Wide-ranging economic reforms were initiated by the Seychelles government in 2008 with the assistance of the Bretton Woods institution following the global financial crisis when the country was faced with crippling levels of external debt.

The five-year IMF-backed reform was completed in October 2013.

According to the latest review of the EFF programme, Seychelles macroeconomic outcomes during the first six months of this year have been ‘positive’.

Tourism is one of the main sectors that contribute towards foreign exchange earnings for Seychelles.

This year, according to the Seychelles National Bureau of Statistics, 223,581 visitors have already disembarked in the Indian Ocean island nation from January to October 25 which represents a 19 percent increase when compared to 2014 figures from the same period.

France remains the leading market with 30,456 visitors followed closely by Germany with 29,377 visitors. Italy, the United Arab Emirates, the UK and China are also among the main markets.

With regards to exchange rate, the IMF mission has reported a “partial reversal” of the depreciation experienced at the end of last year.

The exchange rate in Seychelles depreciated by 11 percent from early August until the end of October 2014, as a result of a surge in imports to the island nation, placing increased pressure on the balance of payments.

The Central Bank of Seychelles (CBS) subsequently decided to tighten monetary policy for the fourth quarter of the year and maintain this stance into 2015 to dampen inflationary second-round effects of the depreciation.

“Fiscal policy remains on track to achieve a primary fiscal surplus of around 4 percent of GDP this year and adequate progress has been made with implementation of the structural agenda….. Inflation is expected to recede to 4.4 percent by the end of the year, given low oil and food prices internationally, and an appropriately tight monetary stance domestically,” says IMF.

While the Bretton Woods institution has predicted a positive growth for 2016, in spite of economic headwinds in China and Europe, which are important source markets for tourists in Seychelles, it has nevertheless called for continued fiscal discipline.

“…monetary policy should be vigilant to the potential impact of domestic demand pressures stemming from wage increases on inflation and inflationary expectations.”

The IMF mission staff will now be submitting a report of their findings to the Executive Board of the IMF, which is expected to discuss the completion of the review in December.