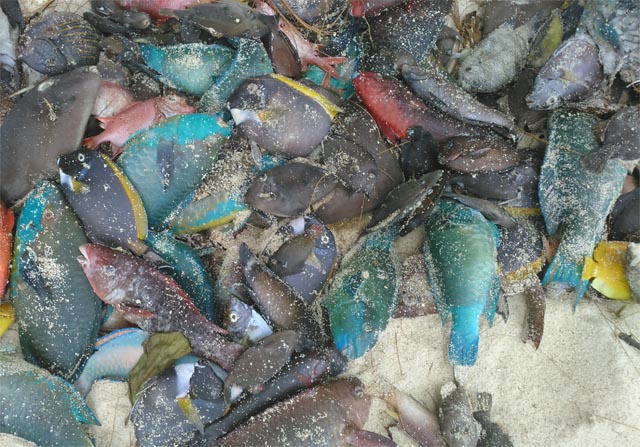 (Seychelles News Agency) - Preliminary results of tests done on fish and water samples taken from the Seychelles waters have confirmed the presence of Cochlodinium polykrikoides as the main plankton species responsible for the algal bloom, affecting some areas of the Indian Ocean archipelago.

This has been confirmed late Friday by the Seychelles Fishing Authority, SFA, which had already identified the same plankton through tests done locally.

Further testing that is being done at the Hydro-Reunion Laboratory, in Reunion island, a French overseas department in the Indian Ocean has now also confirmed that the plankton species, which is toxic in nature, is indeed also toxic for fish species, mainly coral reef fish hence the reason for a large number of fish being found dead at sea or along the beaches.

It was last week that the abnormal death of a large number of fish being washed up onshore was first observed in various parts of the second most populated island of Praslin and neighbouring Cousin nature reserve, the main island of Mahé and other satellite islands.

Water and fish samples were sent to Reunion as early as the beginning of the week but more samples had to be sent again yesterday [Friday] morning.

“We had some delay in communicating the test results because the first samples we sent had been prepared in various ways including by freezing them or putting them in solutions for preservation. Unfortunately the laboratory could not do much aside of identifying the species, as the samples were not good enough to determine the toxicity level,” SFA’s Chief Executive Vincent Lucas told SNA Friday evening.

“We had to send new specimens with a higher concentration of the plankton species and fresh samples of fish and these were delivered to the Laboratory in Reunion by midday [Friday] and we were able to get the preliminary results late Friday afternoon.”

While it’s been confirmed which is the main species causing the algal bloom and there is certainty that it is toxic for the fish, the effects on human is still unknown, hence the caution for people not to consume freshly caught fish is still in force.

“There is no evidence that the species can have adverse effects on humans….therefore more comprehensive and conclusive tests will have to be done to determine whether and to what extent the species can prove toxic to humans when they consume fish,” said Lucas.

According to the SFA CEO, the coral reef species are the main ones at risk as they consume the planktons while pelagic species are less vulnerable as they move away from the affected areas. Nevertheless, people are still being cautioned to limit their consumption of fish.

“These things can bio accumulate in one’s body, you may eat fish containing certain level of toxicity and nothing happens today but after accumulating in your body it can have some adverse effects.”

Results of tests to determine how toxic or not, the plankton species can be to humans, are expected early next week, according to SFA.

Apart from further laboratory investigations to determine whether the toxic plankton affecting the Seychelles Coral reef fish can have any adverse effects on humans, tests are also being carried out to identify other plankton species causing the algal bloom.

Samples of water and fish are also being sent to France for more comprehensive tests.